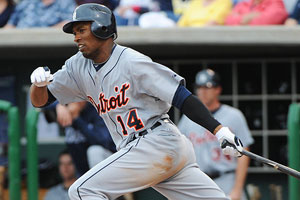 Austin Jackson has been a hit for the Tigers this year.

The Detroit Tigers cannot afford to spend with the Boston Red Sox and New York Yankees, yet must compete with them for playoff positioning in the American League. With big money already committed to pitching ace Justin Verlander, a key element for the Tigers is finding young and relatively inexpensive players to hold down other key positions. Detroit has done just that with centerfielder Austin Jackson.

To do this, the Tigers’ scouts must have sharp eyes as they scour other team’s minor leaguers looking for nuggets to fill out trades. In 2009, incumbent centerfielder Curtis Granderson had become too rich for Detroit’s blood at about $5 million per season, a salary that was due to rise more during the arbitration process.

Granderson still had plenty of value, and the Tigers were able to work out a deal that involved the Yankees and the Arizona Diamondbacks. In that deal Detroit netted pitchers Daniel Schlereth and Max Scherzer from Arizona and Austin Jackson from the Yankees.  Granderson went to New York from Detroit and the Tigers sent pitcher Edwin Jackson to Arizona.

The net affect was that the Tigers received three young players earning near the major league minimum who are able to fill important spots. The main catch was Austin Jackson, who generally leads off for Detroit and patrols centerfield.

Austin Jackson has now played two full seasons in centerfield for the Tigers. This year he leads the American League in triples after finishing second to Rangers’ closer Neftali Feliz in the Rookie of the Year Award balloting in 2010. His overall numbers since taking over Comerica Park’s huge outer pasture include a .272 batting average, 50 stolen bases, 192 runs scored and 86 RBIs from the leadoff position.

For that performance the Tigers have paid him a total of $840,000, about one-fifteenth of what the Yankees are paying Granderson to play the same position. Both teams will be in the playoffs, playing against each-other, starting tomorrow.

Jackson has also been honored with a place on Baseball America’s 2010 All Rookie Team and the Topps 2010 Major League Rookie All Star Team. For the week of Aug. 29 to Sep. 24 this year he was named American League Player of the Week for his .529 batting average (18 for 34) during the week with three doubles, three triples, two home runs, five runs batted in, and 13 runs scored.

Jackson said a conversation he had with manager Jim Leyland has him looking for pitches to hit earlier in the count instead of trying to work the count and that contributed to him earning Player of the Week honors.

“That’s something me and skip talked about,” he said. “He wanted me to be more aggressive early in the count if I got a pitch to hit rather than just being that traditional leadoff hitter. I think that kind of works against me.

“Once I start getting down in the count, then I start expanding on some pitches and end up striking out. The more ready I am to hit earlier in the count is definitely helping me out.”

“He makes us go,” Leyland said. “He does something that we don’t have very much of – he can really run. He’s exciting to watch. When he hits a triple, it gets me pumped up. He’s exciting.”

As the American League Playoffs unfold over the next few weeks it will be interesting to see how the more budget conscious Tigers and Rangers compete against the full sticker price Yankees and Red Sox, assuming Boston can hold off the Tampa Bay Rays for the American League Wild Card. Sometimes it’s not how much a team spends, it’s how they spend it, and the Tigers have a real bargain in centerfielder Austin Jackson.