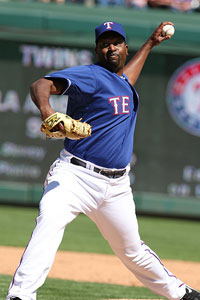 Darren Oliver of the Texas Rangers looks to capture his first World Series ring tonight at the expense of Arthur Rhodes and the Cardinals.

Darren Oliver of the Texas Rangers and Arthur Rhodes of the St. Louis Cardinals are relief pitchers in this year’s World Series with a lot in common.

Each has more than 16 years of major league service.

Each has made one appearance on a big league All Star team.

Each is a lefty specialist, often called upon to retire just one key hitter.

Each was looking for his first World Series title when the Rangers and Cardinals squared off in this year’s Fall Classic.

Rhodes has one big advantage over Oliver. No matter which team wins, he will receive a World Championship ring. The 41-year-old relief pitcher started the season with Texas, but an ERA of 4.81 combined with big jumps in hits and homeruns allowed led to his release on Aug. 8.

Fortunately for Rhodes, the Cardinals were in the process of re-working their bullpen and signed Rhodes for the remainder of the season on Aug. 11. Baseball custom dictates that any player on the roster for even one game receives a championship ring, meaning that Rhodes gets the big prize regardless of who wins. He is also in the unique position of having the Rangers pay more than 90 percent of his salary while he tries his best to beat them. He said that if the Rangers win, he will happily accept the jewelry.

Oliver, whose father Bob Oliver had a seven-year big league career of his own in the 1960s and 1970s, has an advantage over Rhodes in that he pitched in last year’s World Series for Texas when the Rangers were defeated by the San Francisco Giants. Oliver made two appearances, surrendering one run in two and two thirds innings.            “Darren was there last year, so he already knows what it’s about,” Rhodes said to the New York Times. “I’m new to it. But it means I worked my tail off for 19 years, and now it’s my first World Series. I’m going to enjoy it, and when I pitch I’m going to go out there and shine and do my job.”

Ironically, it was Oliver’s outstanding performance when the two were Rangers’ teammates that made Rhodes expendable in Texas. The current Ranger relief pitcher turned in an ERA of 2.29 this year, his third straight season with an ERA of under 3.00. When the Rangers’ brain trust decided it did not need two 41-year-old left handed relief pitchers in the same bullpen it was Rhodes who was released.

According to baseball-reference.com, both relief pitchers’ contracts expire after the World Series. Oliver will have his pick of employers based on his last three seasons of work, while Rhodes may struggle to get an invitation to spring training. But no matter which team is this year’s champion, Rhodes will get the ultimate player souvenir. Whether or not Oliver earned a championship ring, he will likely get to keep pitching and continue to compete at the highest level.

In the eyes of Regal Magazine, both men are winners.