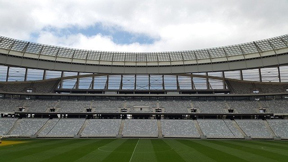 After an alleged racist comment by a referee during a Champions League soccer match, players left the stadium empty by walking off the field in protest.

Soccer Players Exit the Field After Racist Remarks; Athletes Across Globe Speak Out Against Racism

During 2020, athletes from around the globe have used their celebrity to speak out against racism and other injustices.

But players have not settled on just talking the talk.

Many have decided to walk the walk as well as soccer players walked off the field of a Champions League soccer match on Dec. 8 after a referee allegedly made a racist remark about an assistant coach.

“According to an NBC News report, the official, identified as Sebastian Coltescu, reportedly used a Russian word for a Black person,” TheGrio.com reported.

The alleged incident occurred during a match between Paris Saint-Germain (PSG) and Istanbul Basaksehir at Parc des Princes stadium.

Prior to the alleged comments, Webo “had been sent off the soccer pitch after confronting the referee,” reported TheGrio.com.

Demba Ba, striker for the Turkish team, challenged the remarks.

The match got suspended after only 23 minutes of play.

Members of both teams walked off after the confrontation.

The Istanbul team tweeted, “In the Paris Saint Germain match, our footballers decided not to go on the field due to the racism that the 4th referee Sebastian Coltescu had against our assistant coach Pierre Webo.”

In a statement on its website, UEFA (Union of European Football Associations) said, “Following an incident at tonight’s UEFA Champions League match between Paris Saint-Germain FC and Istanbul Basaksehir FK, UEFA has—after discussion with both clubs—decided on an exceptional basis to have the remaining minutes of the match played…(Wednesday, 9 December) with a new team of match officials. The kick-off has been set at 18:55 CET.”

The statement on the UEFA website concluded by saying, “A thorough investigation of the incident that took place will be opened immediately.”

Before Wednesday’s match began, players took a knee in unison as the Champions League anthem played.

Some players even raised fists during the Champions League anthem.

“The walk off by both Basaksehir and PSG together lays down a marker in Europe,” said Piara Powar, executive director of the Football Against Racism in Europe anti-discrimination network. “Many players are fed up with half measures to tackle racism and are more prepared than ever to exercise their right to stop a match.”

The verbal exchange between coach and referee played out live on television.

Racial tension at soccer matches often occurs in the stands.

But the league did not make any excuses for the referee’s words.

French Sports Minister Roxana Maracineanu said “pointing at someone by their (skin) color is unacceptable and inexcusable.”

Maracineanu also praised the players’ actions after the verbal exchange.

She said, “It’s unprecedented and sends a strong signal also to soccer institutions.”

While many social media users thought the words were not racist, Powar said there is no doubt that the comments were racist in nature.

Powar said, “Our colleagues at the Romanian state anti-discrimination organization have confirmed it is racist in Romanian to refer to a player by using his race as an identifier.

“There is no ambiguity. This incident shows the need for much better training of match officials. Unintentional racism is still racism.”

Powar continued, “If officials cannot set the standards by their own behavior, they cannot be relied on to deal with racism on the pitch or in the stands.”

Throughout 2020, professional, college and high school athletes have felt emboldened to speak out against racial injustices and political issues after the killing of George Floyd in Minneapolis.

Now, players have taken that boldness to address alleged racism within the arena of sports.

“What they’ve done was very good from both sides to support those who were in the incident,” said Japhet Tangana, a defender with the premier club Tottenham Hotspur.

Tangaga happens to be Black.

Nevertheless, everyone in the soccer community did not see racism during the exchange on Tuesday.

Regardless of critics, many athletes from across the globe say they plan on continuing to speak out against what they perceive as racism.

Montgomery initially tweeted her decision to sit out the season on June 18, not thinking that it would make a big splash.

However, the Atlanta Dream’s media department got bombarded with calls for media requests throughout the country.

“That to me was when I was like, wow, so people are ready to hear about this,” Montgomery said.

So, the decision to let the game go for a year did not come lightly.

Montgomery said, “If we’re being completely blunt, I didn’t even know how I was going to get the bare essentials of life.”

Nevertheless, she felt compelled to use her voice and platform to speak out for those that lost their lives to police brutality.

Now, that sense of duty and calling has resonated much further than the 50 states to a global platform.