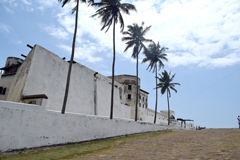 “Slave castles” like this one in Africa represented the point of no return for captured Africans headed to a life of bondage in foreign lands.

Lost in all of the chaos that has engulfed President Donald Trump’s last days in office like his historic second impeachment and the subsequent inauguration of President-elect Joe Biden is the fact that Rep. Sheila Jackson Lee (D-Texas) has introduced reparations legislation.

Rep. Lee introduced H.R. 40 to the House Floor, the Commission to Study and Develop Reparations Proposals for African-Americans Act.

In a press release, Lee said, “Today there are more people at the table—more activists, more scholars, more CEOs, more state and local officials, and more members of Congress. However, despite this progress and the election of the first American President of African decent, the legacy of slavery lingers heavily in this nation.”

She continued, “In short, this Commission aims to study the impact of slavery and continuing discrimination against African Americans, resulting directly and indirectly from slavery to segregation to the desegregation process and the present day. The Commission would also make recommendations concerning any apology and compensation to begin the long-delayed process of atonement for slavery.”

Lee said that the lack of financial restitution is the main factor in many of the issues currently plaguing the African-American community.

She said, “These economic issues are the root cause for many critical issues in the African American community today, such as education, health care, and criminal justice policy, including policing practices. The call for reparations represents a commitment to entering a constructive dialogue on the role of slavery and racism in shaping present-day conditions in our community and American society.”

Rep. Conyers continued his fight for reparations until his retirement in 2017.

After his retirement, the congresswoman from Houston took up the fight, finding new enthusiasm for the cause after the tragic death of George Floyd in Minneapolis last year.

Lee said, “I just simply ask, why not and why not now? If not all of us, then who? God bless us as we pursue the final justice for those who lived in slavery for 250 years in the United States of America.”

Although many critics quickly dismiss the thought of reparations for the descendants of African-American slaves, America has given out reparations in the past.

Furthermore, many critics do not believe that descendants of African-American slaves should receive reparations because those descendants did not suffer under slavery.

However, heirs of deceased Holocaust survivors in America have gotten reparations from other countries like France.

The reparations went out to those “standing in the shoes” of people who died before receiving their reparations.

“In many ways, this is belated justice for the worst crimes in history,” said Stuart Eizenstat, the State Department’s special advisor for Holocaust issues about reparations going to the descendants of Holocaust survivors.

The estates of Holocaust survivors received what those survivors would have received had they still been alive.

Eizenstat said, “We made the argument [to the French government] that they were standing in the shoes of people who would have been eligible.”

After slavery ended, rumors begin circulating that emancipated slaves who receive 40 acres and a mule each as reparations for years of servitude.

Therefore, all ex-slaves died before receiving any compensation for their servitude.

Former African-American slaves had to get what they had “out of the mud,” truly pulling themselves up from their bootstraps, despite probably not even having boots to begin with.

However, when many African-American communities from Tulsa, Okla. to Rosewood, Fla. begin doing better than their White counterparts, those communities got destroyed because of false allegations and/or jealousy.

Furthermore, African-Americans had to endure legal discrimination and oppression for 100 years after the emancipation of slavery, which further hindered their progress economically.

Moreover, while African-American slaves did not get 40 acres and a mule after emancipation, some slaveowners did receive reparations under former President Abraham Lincoln’s administration, which has angered many in the African-American community for centuries.

The New York Times reported, “On April 16, 1862, President Abraham Lincoln signed a bill emancipating enslaved people in Washington, the end of a long struggle. But to ease slaveowners’ pain, the District of Columbia Emancipation Act paid those loyal to the Union up to $300 for every enslaved person freed.”

So while slaves got nothing for lifetimes in bondage, those that enslaved them did get reparations to help ease their transition into a new America.

At the National Anti-Slavery Convention in Philadelphia in 1833, abolitionist William Lloyd Garrison said, “If compensation is to be given at all, it should be given to the outraged and guiltless slaves, and not to those who have plundered and abused them.”

While many critics of reparations believe that taxpayer dollars should not go towards reparations, in 2020 billionaire Robert Smith said that corporations that built their fortune on slave labor should have to pay reparations to the African-American community.

Furthermore, Smith believes that banks could do a lot to close the wealth gap through reparations to make amends for discriminatory lending practices against African-Americans.

Smith said corporations “can bring their expertise and capital to repair the communities that they are directly associated with in the industries in which they cover.”

He added, “I think that has to be a very, a very thoughtful approach. But I think action has to be taken.”