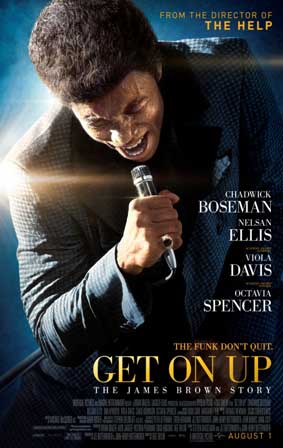 Chadwick Boseman delivered a career altering performance as James Brown in the biopic, “Get on Up.”

Very few people make such a huge difference in such a short period of time.

Few people understand their gift and their purpose so well that they work in pursuit of fulfilling that purpose until their dying day.

True kings and queens often sacrifice their own success and comfort to leave a legacy that makes life a little easier for the next generation.

And although kings come and go, their empires often live in perpetuity because their contributions can never be denied.

Boseman did not get an opportunity to have a long resume.

But it is not necessarily the length that matters when all is said and done.

It is the depth that matters more than the length.

And very few have had as much depth in their movie portrayals as Boseman.

The Howard University alum passed away on Aug. 28 after a four-year battle with colon cancer, which he kept secret from the masses until his untimely passing.

RegalMag.com began reviewing movies at about the same time that Boseman began his ascension to the Black Hollywood throne.

Therefore, allow RegalMag.com to go back in the vault to relive some of the best crowning achievements in Boseman’s career.

“42”—A testament to Boseman’s talent was the fact that he portrayed icons who had not gotten the big screen treatment until the South Carolina native came into the game. Biopics of Jackie Robinson and James Brown had been pitched for decades but to no avail. Sure, Robinson played himself back in the day in the same way that Muhammad Ali portrayed himself on camera. But that is not the same as having a true thespian portray an icon. Brown even considered Eddie Murphy worthy of portraying him during Murphy’s heyday. But those stories did not get told until Boseman hit those roles out of the park. As Robinson, he had to master the Brooklyn Dodgers star’s temperament, which had to be curtailed to make the racial experiment in Major League Baseball a success. Like everything Boseman touched, his performance was a whopping success.

“Get on Up”—A friend of Chadwick Boseman from South Carolina said that while watching “Get on Up,” he believed he was really watching James Brown. He did not even know that Boseman could dance. Maybe he could not dance before taking on the role of the “Godfather of Soul.” However, his dedication to the craft made his dance moves as comparable to Brown as any mortal not named Prince or Michael Jackson. In “Get on Up,” Boseman’s portrayal of Brown was unapologetically authentic. Brown was both a jerk and a genius. At the time, moviegoers often forgot that they were in a movie house and not a concert hall jamming to some of the funkiest music of all time.

“Black Panther”—Of all of the iconic roles that Boseman mastered, “Black Panther” will go down arguably as his most important. Sure, true stories should be the most important. But what “Black Panther” did for little African-American children who had never seen their likeness on screen as a true superhero is generation changing, let alone life changing. Marvel released “Black Panther” as the first true Black superhero with his own movie. No disrespect to Robert Townsend’s “Meteor Man” though. To see Africa represented in its true regal glory. To see the diversity represented on the set of “Black Panther,” shot in part at Tyler Perry Studios in Atlanta changed the game forever. And to see the beautiful dashikis at the movie theater created the type of atmosphere usually just reserved for “Star Wars.”

“Marshall”—The brilliance of the “Marshall” biopic was that filmmakers chose a relatively obscure case from Thurgood Marshall’s resume to show his brilliance. Furthermore, filmmakers showed their brilliance in choosing Boseman to portray the ingenuity of the man who would become the first African-American justice on the United States Supreme Court. “Marshall” did not go the predictable Hollywood route by portraying a case like Brown v. Board of Education. In doing so, the focus was totally on the performance and not the hype surrounding Marshall’s many high-profile cases.

“21 Bridges”—Boseman had the type of versatility that legendary actors like Denzel Washington and Laurence Fishburne posses. All three could give heart-wrenching performances in biopics. But Fishburne showed his diversity in science fiction roles like “The Matrix.” And Boseman catapulted himself into the same category as Washington when he showed he could carry a crime thriller as well. Although predictable describes “21 Bridges,” Boseman shines in this intense blood bath. Boseman also produced the film.

“Da 5 Bloods”—Not trying to speculate, but what African-American actor or actress of a certain age did not dream of working on a Spike Lee joint. The Morehouse College alum took African-American movies to the next level in the 1980s and 1990s and paved the way for filmmakers like John Singleton who followed in his footsteps. Although Boseman did not have a huge role in “Da 5 Bloods,” his presence was felt throughout the film as four Vietnam War veterans returned to the Asian country to recover gold that they left behind decades earlier. Boseman’s performance in “Da 5 Bloods” becomes more legendary when thinking about his battle with colon cancer. Co-star Clarke Peters told his wife that he thought Boseman was “precious” or pampered because he had people massaging his body and feet while his girlfriend held his hand, during breaks. Peters thought at the time that the success of “Black Panther” had gone to Boseman’s head. After finding out about Boseman’s four-year fight, Peters was reduced to tears on television when he recalled his premature judgment.