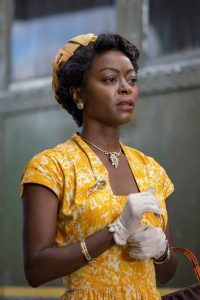 So many brilliant and beautiful Black women shined in 2022 that one article celebrating their greatness would not suffice.

But whether it was Hollywood, hoops or the high court, Black women showed how great they are in 2022 like they have always done in prior years.

Therefore, for showcasing so much greatness RegalMag.com would like to show its appreciation for the wonderful year they enjoyed in 2022 by continuing the list of the 22 most beautiful women of the past calendar year.

Click here to view part one of Regal Mag’s 22 most beautiful women of the year.

And click the links below to learn more about these wonderful women.

Danielle Deadwyler—In about six years’ time, Danielle Deadwyler has gone from playing Quita Maxwell on “Tyler Perry’s The Have and the Have Nots” to playing civil rights icon Mamie Till-Mobley in “Till,” which depicts the horrific killing of Emmett Till, which galvanized the Civil Rights Movement. Deadwyler’s performance in “Till” was so captivating that she has received some Oscar buzz.

SZA—Great things come to those that wait. And R&B diva SZA made sure her fans remained on pins and needles anticipating the release of her sophomore album, “SOS.” Although it took her five years to drop her second joint, it immediately began tearing up the charts upon release with the ladies’ anthem “I Hate U” and hits like “Shirt” and “Nobody Gets Me.”

Malika Andrews—Forget her brief dust-up with Stephen A. Smith on ESPN’s “First Take” earlier this year because 2022 was still fabulous for sports journalist Malika Andrews. She continued to display her talents on ESPN hosting studio shows as well as covering games. Andrews made her debut as a sideline NBA reporter in 2020 in the playoff bubble. Her continued success has burst anyone’s bubble who doubted her talent and staying power.

Sydney Carter—Texas Longhorns assistant women’s basketball coach Sydney Carter has become an Internet sensation recently. Her Instagram posts often get much attention from the masses, just like her skills as player once did. She has not yet ascended to a head coaching position. However, a former Aggie star coaching the rival Longhorns shows her dedication to the craft.

Koffee—The future of reggae music is in good hands if Koffee’s rise to fame is any indication. In March, Koffee dropped the album “Lifted” containing the fan favorite, “Pull Up.” Like reggae artists of the past, Koffee uses her music to address social issues. About growing up in Jamaica, she told Apple Music, “There’s youths here that have grown up with violence right at their doorstep, and I’m not just representing myself now—I also must speak out for them.”

DeWanda Wise—Put some respect on DeWanda Wise’s name because she is one of the best young actresses in the game. When a sister stars in a “Jurassic Park” installment, she is definitely a major talent. Although “Jurassic World Dominion” disappointed many fans, Wise did not disappoint. And she is definitely not a one trick pony, starring in the western “The Harder They Fall” and opposite Kevin Hart in the drama, “Fatherhood.”

Cassandra Freeman—Coco Jones was not the only sexy chocolate beauty in “Bel-Air.” While Janet Hubert is arguably most people’s favorite Aunt Viv, Freeman did not disappoint in the more dramatic reboot on the streaming service, Peacock. The veteran actress also previously appeared in films “Blue Caprice” and “Inside Man,” as well as the Netflix show, “Luke Cage.”

Gabrielle Ryan—In “Power Book IV: Force,” Gloria, played by Gabrielle Ryan, was the latest woman to fall in love with Black America’s favorite White gangster, Tommy (Joseph Sikora). SPOILER ALERT: Although her time on “Force” was brief, she made the most of her opportunity, becoming a star in one season. Like Deadwyler, many first took notice of her on “Tyler Perry’s The Haves and the Have Nots.” Her rise to stardom is also on the same meteoric trajectory as Deadwyler if “Force” is any indication.

Blythe Howard—Like Ryan’s character Gloria, Blythe Howard’s character Adrienne made her mark on “Power Book IV: Force” by falling in love with a gangster. In Adrienne’s case, she fell for Diamond (Isaac Keys). Howard showed her diversity in 2022 too by starring as Dr. Layla Monroe in “Falling for Christmas,” which starred Lindsay Lohan and Jack Wagner. Howard’s resume includes appearances in “Yellowstone,” “Dynasty” and “High School Musical: The Musical: The Series.”

Shenseaa—If you don’t know, you should get to know. To same music lovers, Shenseaa might not be a household name. But to those in the Caribbean, her career has reached legendary status already. In January, she dropped the single “Lick” with legendary Houston rapper, Megan thee Stallion. In March, the reggae sensation released her album, “ALPHA.” The LP boasted of guest appearances from Tyga, 21 Savage, Offset of Migos, Sean Paul and iconic dancehall artist, Beenie Man.

Sandra Douglass Morgan—The Las Vegas Raiders might be dealing with some controversy because of the decision to bench veteran quarterback Derek Carr. But if the hiring of Sandra Douglass Morgan as the franchise’s president created controversy, who cares? Morgan seems like the ideal fit for the Las Vegas Raiders, graduating from law school, undergraduate school and high school all in “Sin City.” It would have been sinful to not to give this impressive sister the prestigious position because with her experience on the Nevada State Athletic Commission and Nevada Gaming Board, competition is definitely in her blood.