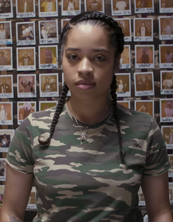 Regal Mag profiling some of the most beautiful women in the game at the end of the year is more American than apple pie.

Just like the annual Regal King of the Year Award, readers can bet the house on the fact that this online Black men’s magazine will show love to beautiful Black women.

But possibly unlike other publications, no woman can receive this honor for two consecutive years.

Additionally, Regal Mag highlights women that are equally beautiful on the inside as they are on the outside.

Furthermore, the women honored must have had a stellar calendar year in their profession of choice.

So, without further ado, Regal Mag would like to present our much-anticipated most beautiful women of the year list in no particular order.

Click the links below to learn more about these beautiful women!

Coco Jones—Are you telling us that the little girl who made kid-friendly music has now become a sexier Hilary Banks than the original Hilary Banks from “The Fresh Prince of Bel-Air?” The singer/actress and star of “Bel-Air” who was raised in Lebanon, Tenn. brought a more serious and more chocolate vibe to the role and has made many forget about the great, Karyn Parsons. No offense to the O.G.!

Latto—In a hip-hop era inundated with great women rappers, it might be hard to stand out from the pack. However, Latto had no problem shining in a world filled with stars. With instant classics like “Sunshine” with Lil Wayne and Childish Gambino and her breakout smash “Big Energy,” it is almost certain that Latto will continue to do big things in the entertainment industry.

Ketanji Brown Jackson—When President Joe Biden was running for the Oval Office, he made a vow to nominate a Black woman to sit on the highest court in the land. Despite some conservative backlash, President Biden stuck to his promise, picking a brilliant mind to break that proverbial glass ceiling. Jackson endured over the top questioning from politicians on the right during her confirmation hearings. But she kept her poise and dignity, showing the type of temperament that will make her a historically significant justice in more ways than one.

Karine Jean-Pierre—Wise people often say a person is irrelevant if they do not have haters. Well, White House Press Secretary Karine Jean-Pierre is obviously relevant on a global scale because her appointment as the first Black and lesbian White House press secretary upset haters from America to Russia. Vladmir Putin’s Russian television propagandists said Jean-Pierre “only got the job because she is Black and gay.” But the real question is would she have gotten the job sooner if she was not?

Shaye Moss—America’s democracy would have been better off if the country had never heard the name Shaye Moss. She was the Georgia poll worker who found herself in the media spotlight when former President Donald Trump and his cult followers falsely accused her and her mother of trying to steal the election from him. She endured death threats and harassment. But she was strong enough not to let it adversely impact her job of legally counting votes. And she did not let it stop her from sharing her plight with the American people during the Jan. 6 committee hearings.

Lady Ruby Freeman—Behind every strong woman, there is often an even stronger woman, a mother. Lady Ruby Freeman endured the same hell that her daughter Shaye Moss endured after former President Donald Trump attempted to overthrow American democracy and steal the White House from President Joe Biden. But like any good mother, she was right behind her brave daughter, supporting her while the world watched, and insurrectionists fumed.

Ariana DeBose—Actress Ariana DeBose represented in “West Side Story,” so much so that she won an Academy Award for her portrayal of Anita in the Steven Spielberg musical. And in her Oscar acceptance speech, DeBose made sure she represented for Afro-Latina and queer women who do not always get the platform that women in the mainstream often receive in Hollywood.

Muni Long—If a person did not hear the song “Hrs & Hrs” on the radio 24/7 during the 2022 calendar year, that person must not be an R&B fan, or they do not own a radio or have Internet access. But do not get it twisted. “Hrs & Hrs” will always be her biggest record. But she is no one-hit wonder with other bangers like “Plot Twist” and “Baby Boo” with Saweetie.

Ari Lennox—R&B sensation Ari Lennox deserves to be on this list for more than one reason. Sure, she dropped a bomb album in 2022 entitled, “age/sex/location.” Sure, Lennox had a smash hit with “Pressure.” But the talented and beautiful songstress proves she could handle the pressures of life, overcoming the stresses of fame and the stresses of the music industry to persevere through it all. Her latest album also included fan favorites “POF,” “Hoodie” and “Waste My Time.”

Ella Mai—Many people say that real R&B is dead. Others say it is on life support. But if the genre is still relevant it is because of the ladies of soul music like Ella Mai. The British songstress returned with her sophomore album “Heart on My Sleeve” in 2022. The LP contained the monster hit “DFMU” and “Not Another Love Song,” originally released as a single in 2020. “Heart on My Sleeve” also included spoken-word interludes from such heavy-hitters as Mary J. Blige and Kirk Franklin.

Kehlani—R&B diva Kehlani joined the list of new R&B superstars in 2022 with the album, “blue water road.” Kehlani’s style epitomizes sultry, smooth and sexy much in the same vein as a young Sade. Kehlani took advantage of some great collaborations with artists like Blxt and Syd. However, Kehlani had the most chemistry with pop star Justin Bieber on the track “up all night.” Kehlani also did a bomb feature with new hip-hop/R&B hybrid sensation, Bleu.

Click here to read part two of Regal Mag’s 22 most beautiful women of the year.