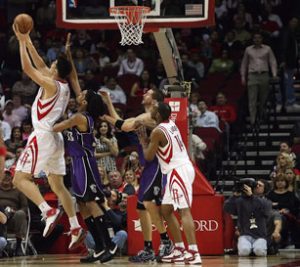 Injuries prevented Yao Ming (with ball) and the Houston Rockets from reaching their full potential in the first decade of the new millennium.

Have you ever heard of the East Coast bias in media?

Well, RegalMag.com might have a “Dirty South” bias, more specifically a Houston bias.

Therefore, forgive Regal if its list of the 10 biggest what-ifs in the history of the National Basketball Association (NBA) has an H-Town slant.

But hate it or love it, forgive or not, here is RegalMag.com’s 10 biggest what-ifs in recent NBA history.