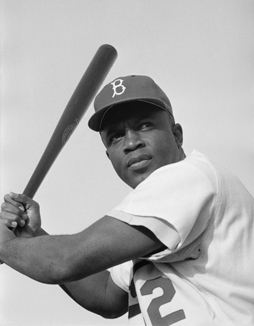 Jackie Robinson is arguably the most decorated Negro Leagues alum because he broke the Major League Baseball color barrier with the Brooklyn Dodgers in 1947.

How can Major League Baseball players of the early 20th century claim to be the best in the world when many did not play against ball players of color?

Because of segregation, Black baseball players played in the Negro Leagues, while the more lucrative and glamorous Major Leagues had a no Negro policy for decades.

Although many Negro Leagues players did not get the shine they deserved during their lifetimes make no mistake about it, baseball did not just represent America’s pastime.

Therefore, let RegalMag.com take a trip back to the past and honor its all-time all-Negro Leagues baseball team in honor of the 100th anniversary of the Negro National League (NNL).

Pitcher: Leroy “Satchel” Paige—In basketball, very few people ever knew how old Dikembe Mutombo really was at a given time. The same can be said about Kansas City Monarchs pitching legend, Leroy “Satchel” Paige. If Paige entered the Major Leagues during his Negro Leagues prime, baseball historians might have to consider him as the best pitcher to ever play Major League Baseball. He had already reached 40 years old when Jackie Robinson broke the modern color barrier in Major League Baseball. He even pitched a game for the Oakland A’s at 59 years old. Nolan Ryan, Roger Clemens and Randy Johnson had nothing on this ageless wonder.

Catcher: Josh Gibson—Josh Gibson was the Black Babe Ruth, plain and simple. Or Babe Ruth was really the White Josh Gibson. The power-hitting catcher from the Homestead Grays reportedly hit over 800 homeruns during his professional baseball career. In 1967, the Sporting News reported that Gibson once hit a 580-foot homerun in Yankee Stadium. Gibson passed away months before Jackie Robinson broke the color barrier in Major League Baseball.

Outfield: James “Cool Papa” Bell—Old timers will tell people that that boy “Cool Papa” had so much speed that when he turned the light switch off, he would be in bed before the room got dark. Hyperbole? Heck yes. Bell said that one game he got five hits and five stolen bases. However, he did not get credit for that feat because the scorekeeper forgot to bring the scorebook. Competitors said that he could advance two or three bases on a simple bunt.

Outfield: Oscar Charleston—Buck O’Neill once said, “Charlie was a tremendous left-handed hitter who could also bunt, steal a hundred bases a year, and cover center field as well as anyone before him or since…he was like Ty Cobb, Babe Ruth and Tris Speaker rolled into one.” Charleston’s best season came in 1925, hitting .451 with 20 homeruns and 35 runs batted in while playing for the Harrisburg Giants. The center fielder won the Eastern Colored League batting title in 1924 and 1925.

Outfield: George “Mule” Suttles—Mule Suttles’ teammate Squire Moore said, “He didn’t get the ballyhoo that Satchel (Paige) and Josh (Gibson) got. They were the ones who it seemed all the sportswriters put the praise on. Mule Suttles was a powerful hitter. I can’t fathom why he didn’t get the publicity they got. He was a laid-back person. He didn’t do too much talking. He wasn’t the boastful type. Sometimes the better players get overlooked.” Part of the reason why Suttles might not register to casual baseball fans like other Negro Leagues legends is because he played for teams that folded earlier than others, and lived in a town that no longer exists. Anonymity should not come as a surprise. But his talent did not surprise his peers as he hit .300 in 12 seasons, played in five East-West Classic All-Star Games, and hit the first homerun in the event’s history.

First Base: Walter “Buck” Leonard—Historians describe Buck Leonard as one of the best pure hitters in Negro Leagues history. Booking agent Eddie Gottlieb said, “Buck Leonard was as smooth a first baseman as I ever saw. In those days, the first baseman on a team in the Negro Leagues often played the clown. They had a funny way of catching the ball so fans would laugh, but Leonard was strictly baseball—a great glove, a (heck) of a hitter and drove in runs.” The Sporting News ranked him as the number 47th slugger in the list of the 100 greatest baseball players of all time in 1999.

Second Base: Martin Dihigo—Martin Dihigo came from the island of Cuba and made his debut with the Eastern Colored League’s Cuban Stars in 1923 at 18 years old. The initial scouting report on Dihigo indicated he could destroy a fastball. However, he struggled hitting the curveball. But through tireless dedication, he turned himself into a good curveball hitter. Dihigo became a member of the Baseball Hall of Fame in 1977.

Shortstop: Jackie Robinson—Jackie Robinson did not have the best Negro Leagues career of all time. However, he became the Negro Leagues most accomplished alum because he broke Major League Baseball’s color barrier when Branch Rickey signed him to play second base for the Brooklyn Dodgers. Although the Negro Leagues boasted better players than Robinson, very few had his credentials of graduating from college (UCLA), working with White Americans in the military and having a stable family life. Those aforementioned qualities made him the perfect choice to make history.

Third Base: Ray Dandridge—Hall of Famer Monte Irvin said, “Dandridge didn’t get the chance to play in the majors, but he had major league talent.” The 1987 Baseball Hall of Fame inductee hit .362 with 114 hits in 99 games as a 35-year-old rookie in 1949 with the Minneapolis Millers of the American Association. The Millers were a team in the New York Giants farm system. He lied about his age to get his shot, which resulted in him winning Rookie of the Year in his first season.

Manager/General Manager: Rube Foster—Historians have called Rube Foster the “father of Black baseball.” That label comes from Foster’s dominance on the baseball diamond as a pitcher and as a manager and executive. According to BaseballHall.org, “In 1920, Foster set the wheels in motion to create the Negro National League, an association of Black teams modeled after Major League Baseball. Foster was named president and treasurer. The first successful league for African-American players, the NNL flourished throughout the decade. Players’ salaries rose to an unprecedented level, teams traveled on Pullman coaches and players received regular bonuses.”