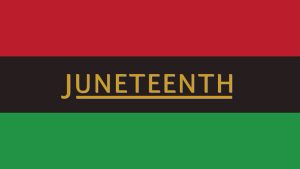 In 2021, Juneteenth, which commemorates the emancipation of African-American slaves in Galveston, Texas in 1865, became a national holiday.

Not everyone seems pleased that Juneteenth is now a national holiday.

An insurance company in Millinocket, Maine finds itself in hot water after the company posted a racist sign explaining why its offices were closed on June 20.

The holiday, which has been a state holiday in Texas since 1980, commemorates the day in 1865 when African-Americans in Galveston, Texas found out that they had been emancipated from bondage.

African-Americans favoring foods like fried chicken, collard greens and watermelon have long been racist tropes used by some Americans to demean the African-American community.

The sign at the insurance company in Maine soon went viral.

One social media user who goes by the handle Geo1976rge wrote, “And is that an @AllState logo on the bottom right? Bet they also do @Progressive. Is this the type of hatred you want posted right next to your company logo?”

As a result of the social media backlash, Allstate and Progressive have severed ties with Harry E. Reed Insurance Company.

In an email to NPR, Progressive spokesperson Jeff Sibel wrote, “At Progressive, Diversity, Equity and Inclusion (DEI) are fundamental to our Core Values. We’re committed to creating an environment where our people feel welcomed, valued and respected and expect that anyone representing Progressive to take part in this commitment. The sign is in direct violation of that commitment and doesn’t align with our company’s Core Values and Code of Conduct.”

Allstate released a statement to Newsweek that read, “We are terminating our contract with this independent agent. Our commitment to Inclusive Diversity and Equity is non-negotiable and we take action when individuals violate our code of conduct.”

Steve Golieb, who chairs the Millinocket Town Council, released a statement calling the sign “deeply saddening, disgraceful and unacceptable for any person, business, or organization to attempt to make light of Juneteenth and what it represents for millions of slaves and their living descendants. There is no place in the Town of Millinocket for such a blatant disregard of human decency.”

An unconfirmed statement on the company’s Facebook page read, “I am so sorry for any pain I have caused and the negative attention it brought to our beautiful community.”

On June 18, a group of White Lives Matter activists protested outside of a Juneteenth celebration in Franklin, Tenn.

Approximately 10 White men held signs outside of the celebration with messages such as “Stop White Replacement” and “It’s ok to be white.”

The Reader’s Digest version of White replacement theory is “White Replacement Theory holds that minorities are overtaking a country’s White majority and destroying White culture. It often leads to violence, including the May 2022 mass shooting in Buffalo, New York, that killed 10 people. Once a fringe theory, White Replacement Theory has gone mainstream over the last several years, via social media, politicians, and media personalities. While its name comes from a 2011 French book, its underlying ideology has been around for centuries.”

Global Project Against Hate and Extremism calls White Replacement Theory a “white supremacist, xenophobic, and anti-immigrant concept that posits white people are being replaced by immigrants, Muslims, and other people or color in their so-called ‘home’ countries.”

The protestors, who see Juneteenth as proof of White replacement, donned white t-shirts with matching logos, along with black skull balaclava face coverings.

Additionally, the City of Franklin reported that another group crashed this year’s Juneteenth celebration.

The Franklin Police Department said that they had no prior knowledge that protestors would attempt to crash the Juneteenth festival.

The city’s statement added, “The other group, who said they were there to be a buffer between festival-goers and the other group, included people who were armed and wearing ballistic vests. Both groups left the area when asked. There was no violence and were no arrests after Franklin Police Officers intervened.”

Fatma Khaled of Newsweek reported, “Protestors in both groups were also distributing flyers saying that they are demonstrating because ‘the anti-white system is committed to our spiritual and physical genocide.’ The pamphlets were handed out to festival attendees before the police arrived, according to local news station WMSV-4.”

While many people across the country celebrated Juneteenth as a national holiday for the second year ever, some states do not honor the national holiday by giving state employees a paid day off.

America celebrated Juneteenth 2022 on Monday, June 20 because June 19 fell on a Sunday.

Before Juneteenth became a national holiday, the only states to give state employees the day off were Illinois, Louisiana, Maine, Massachusetts, New York, Oregon, Texas, Virginia and Washington.

As a result, the National Football League took the 1993 Super Bowl out of Arizona and awarded the game to Los Angeles.