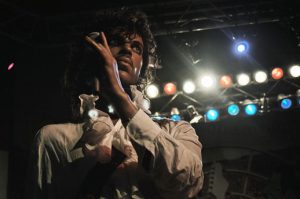 In June, a 100-foot-tall mural of Prince will be unveiled in downtown Minneapolis.

They say only iconic people get streets named after them like Martin Luther King, Jr. Blvd.

Now, the Twin Cities might have a street named after the king of the Minneapolis sound, Prince Rogers Nelson.

The Minneapolis native, who brought the world other Minneapolis musical legends like Andre Cymone, Dez Dickerson, as well as Morris Day, Jerome Benton, Jimmy Jam and Terry Lewis from The Time, often famously tried out his new music live in front of the First Avenue crowd.

Prince and the Revolution often recorded their First Avenue performances and released those performances on their studio albums also.

WCCO, Minneapolis’ local CBS affiliate, reported, “Sharon Smith-Akinsanya and Joan Vorderbruggen are behind the effort for the ceremonial street sign, as well as a 100-foot-tall Prince mural planned to be unveiled in downtown Minneapolis next month.”

Vorderbruggen said, “We’re so thrilled that the city of Minneapolis and the state of Minnesota have been as supportive as they have been.”

Smith-Akinsanya said, “He could’ve lived anywhere in the world but he chose Minneapolis, so I can’t think of any other better way than to honor him with the renaming.”

And some Minneapolis residents say that they can go anywhere in the world and when they tell people they reside in Minneapolis, people mention Prince.

Fan Mike Griffin said, “Everywhere I go I say, ‘I’m from Minneapolis,’ and the first thing they say is, ‘That’s where Prince is from.’”

Next month, Prince fans from all around the world plan to commute to the Twin Cities area to celebrate Prince’s birthday at an event hosted by the Prince Estate at his famed compound, Paisley Park.

Also next month, the Prince Estate plans to release a vinyl version of his critically-acclaimed 1995 album, “The Gold Experience.”

For years, “The Gold Experience” remained out of print and off of many streaming sites and music downloading sites because of a copyright dispute surrounding the hit song, “The Most Beautiful Girl in the World.”

Additionally, Prince famously left behind around 1,000 unreleased songs, which many fans hope sees the light of day.

In 2021, the Prince Estate released the previously unreleased full-length album, “Welcome 2 America,” which Prince infamously shelved in 2010 in favor of the album, “20Ten.”

Other complete, but yet unreleased Prince or Prince-related, projects allegedly include “The Rebels,” “The Flesh,” “Flash,” “Madrid 2 Chicago” and “Last December” among others.

The super-deluxe issue featured the original double album, B-sides, 45 previously unreleased tracks, two audio CDs of a concert and a concert DVD of a “Sign ‘O The Times’ tour performance.

Prince had planned to release a deluxe version of “Purple Rain” before his death in 2016, which the Estate dropped in 2017.

Later, the Estate released a super deluxe version of “1999,” which featured the original double album, B-sides, 24 unreleased tracks, an audio CD of Detroit concert and a DVD of a concert performance at The Summit in Houston.

The Prince Estate has also issued the “Originals,” which featured Prince’s demo versions of classics by The Time, Apollonia 6, Sheila E, Kenny Rogers and The Family.

Maria Cramer of The New York Times reported, “Matthew Liddy, a production manager at WCCO-TV, a CBS station in Minnesota, was watching footage of a 1970 teachers’ strike in Minneapolis in late February when he saw a familiar face.

“On the screen was a boy, 11, in blue ear warmers and a jacket, being interviewed by one of the station’s reporters and giving a sidelong look and a sly half grin…

“That hunch led to a five-week investigation by producers and reporters, who verified that they boy in the clip was in fact Prince, the music legend and celebrated son of Minneapolis who died on April 21, 2016, at age 57.”

When Prince grew up in the Twin Cities area, many bands competed for supremacy like Prince’s bands Grand Central and Champagne and Flyte Tyme, which featured Prince’s former middle school classmate Jimmy Jam, along with Lewis, Monte Moir (all later from The Time) and future solo star, Alexander O’Neal.

At the time, Pepe Willie was married to Prince’s cousin.

Pepe Willie said he is the one that taught Prince about the significance of owning one’s music publishing.

Prince eventually championed artist owning their own masters, famously writing slave on his face in the mid-1990s to protest his recording contract with Warner Bros.

Eventually, Prince gained ownership of all his master recordings, which included the 39 solo studio albums released during his lifetime, in addition to the thousand or so unreleased songs allegedly in his famed music vault.