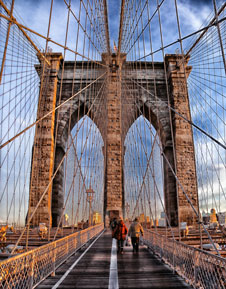 The bipartisan infrastructure bill will help fix roads and bridges among other things.

On Nov. 15, President Joe Biden, flanked by Republican and Democratic lawmakers, did something that previous presidents could not during their administrations.

“Here in Washington, we’ve heard countless speeches, promises, and white papers from the experts. But today, we are finally getting it done. And my message to the American people is: America is moving again. And your life is going to change for the better.”

CNBC reported, “The package will put $550 billion in new funds into transportation, broadband and utilities. Biden’s signature follows years of failed efforts in Washington to overhaul physical infrastructure, improvements that advocates have said will boost the economy and create jobs.

“The legislation will put $110 billion into roads, bridges and other major projects. It will invest $66 billion in freight and passenger rail, including potential upgrades to Amtrak. It will direct $39 billion into public transit systems.

“The plan will put $65 billion into expanding broadband, a priority after the coronavirus pandemic left millions of Americans at home without effective Internet access. It will also put $55 billion into improving water systems and replacing lead pipes.”

Biden desperately needed a victory after a tumultuous first year in the Oval Office, which includes extremely low poll numbers.

However, many progressives want more done with Biden’s bigger initiative, the Build Back Better bill that will address climate change and other progressive issues.

However, it might take months or years for the first infrastructure projects to begin, which might further hurt Democrats in the polls.

But Biden and the Democrats hope that the infrastructure bill will show some tangible results before the midterm elections in 2022.

Nonetheless, the infrastructure deal should help expand access to transportation for those with disabilities.

Approximately $2 billion will go to transit agencies across America that will address the accessibility issue in transportation.

CBS News reported, “Some 20% of all transit stations in the U.S. are not in compliance with the Americans with Disabilities Act, according to the Federal Transit Administration, because they aren’t accessible to people with disabilities.”

This issue resonates with Sen. Duckworth because she had to have both of her legs amputated.

Earlier this year, Duckworth said, “I still to this day can’t ride the subway in New York. I can’t ride the L in Illinois, in Chicago, I can’t get around on it very well because half the time there might not be an elevator.

“I tried accessing the subway in New York once and could not get on because the elevator was not working, and the next one didn’t have an elevator—or the one after that.”

The program also calls for more accessibility at Amtrak stations across the country.

Furthermore, the bill will add countless charging stations across the country for electric cars that experts say have a less adverse impact on the environment.

In a statement, Landrieu said, “I am thankful to the President and honored to be tasked with coordinating the largest infrastructure investment in generations.

“Our work will require strong partnerships across the government and with state and local leaders, business and labor to create good-paying jobs and rebuild America for the middle class. We will also ensure these major investments achieve the President’s goals of combating climate change and advancing equity.”

Over the last few years, partisan gridlock has blocked many legislative efforts.

Some have blamed the media for contributing to the disharmony in Washington, D.C.

Others have blamed past and present politicians themselves for the divisiveness in politics.

Regardless, Republicans and Democrats showed that true unity and bipartisanship can exist in politics even though many disagree on some important issues.

At the White House ceremony to celebrate the signing of the infrastructure deal, Democrat and GOP senators took the microphone to discuss the historic moment.

“This bipartisan support for this bill comes because it makes sense for our constituents, but the approach from the center out should be the norm, not the exception,” said the senator from Ohio who helped negotiate the historic deal.

However, some Republicans did not look fondly on the bipartisan deal.

Sen. Ted Cruz (R-Texas) said, “They gave Joe Biden a political win. He will now go across the country touting, look at the big bipartisan win. And that additional momentum, unfortunately, makes it more likely they will whip their Democrats into shape and pass some multitrillion-dollar spending bill on top of this.”