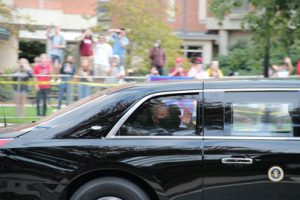 In a statement, the White House said, “(Bolden) has steadfastly maintained his innocence, arguing that he was targeted for prosecution in retaliation for exposing unprofessional and racist behavior within the U.S. Secret Service. Mr. Bolden has received numerous honors and awards for his ongoing work to speak out against the racism he faced in the Secret Service in the 1960s, and his courage in challenging injustice. Mr. Bolden has also been recognized for his many contributions to his community following his release from prison.”

Prior to Biden’s pardon, Bolden had sought pardons from past Presidents Richard Nixon, Bill Clinton and Barack Obama.

The BBC reported, “In 1964, Mr. Bolden was fired from the Secret Service after being charged with trying to sell a government file in exchange for a $50,000 bribe.

“He denied the allegations, asserting he was being framed for attempting to expose misconduct within the agency.

“Among his accusations were that Secret Service agents drank heavily on the job, missed shifts, and used their official vehicles to transport women or visit bars. He also said he faced racial abuse from co-workers…

“Following a hung jury in his first trial, he was convicted at his second and sentenced to [six years]—even though some witnesses said they had been pressured into lying by prosecutors.”

Many credit Chicago Sun-Times columnist Mary Mitchell for getting Bolden a pardon after she called for a pardon in a January column.

In an April 2021 Chicago Sun-Times column, Mitchell wrote, “an assignment that should have brought Bolden great honor ended up causing him greater harm. In his memoir, Bolden describes overt racist acts that began upon his arrival. His assignment became a nightmare after he complained about agents drinking on the job, chasing women and showing up unfit for duty.

“But he became a real problem for the Secret Service when he threatened to reveal the agency’s shortcomings in guarding the president. After doing that, he was charged with bribery in a case involving a counterfeiting defendant, tried twice, convicted and sentenced to six years in prison.

“While Bolden’s life story might sound like a conspiracy theory to some, Black Americans will identify with the brand of injustice that buries its victims under false accusations and legal documents.”

Although Kennedy had many critics in the South, he was still allowed to ride with the convertible top down.

If the convertible top of the car was up, Oswald would have never been able to fire the fatal shots from the Texas School Book Depository.

The president said, “America is a nation of second chances, redemption and rehabilitation. Elected officials on both sides of the aisle, faith leaders, civil rights advocates, and law enforcement leaders agree that our criminal justice system can and should reflect these core values that enable safer and stronger communities.”

His actions on April 26 marked the first time Biden used his executive powers to grant pardons and clemency, after many of his supporters and critics urged him to make a difference on criminal justice reform.

Biden added, “During the Second Chance Month, I am using my authority under the Constitution to uphold those values by pardoning and commuting the sentences of fellow Americans.”

The Washington Post reported, “Biden’s use of his sweeping clemency powers appears more targeted on righting injustices than his immediate predecessor, Donald Trump, who was known for granting pardons to celebrities and political allies who had broken the law.

“The Biden administration also announced plans to help individuals transition back into society after incarceration, including a program that provides job training; increased support for housing, health-care and educational needs; and grants for former convicts hoping to start small businesses.”

Biden said, “As I laid out in my comprehensive strategy to reduce gun crime; helping those who served their time return to their families and become contributing members of their communities is one of the most effective ways to reduce recidivism and decrease crime.”

According to the Department of Justice, a pardon is “an expression of the President’s forgiveness and ordinarily is granted in recognition of the applicant’s acceptance of responsibility for the crime and established good conduct for a significant period of time after conviction or completion of sentence. It does not signify innocence. It does, however, remove civil disabilities—e.g., restrictions on the right to vote, hold state or local office, or sit on a jury—imposed because of the conviction for which pardon is sought, and should lessen the stigma arising from the conviction.”