To Give Respect When it’s Due: Charles Rangel 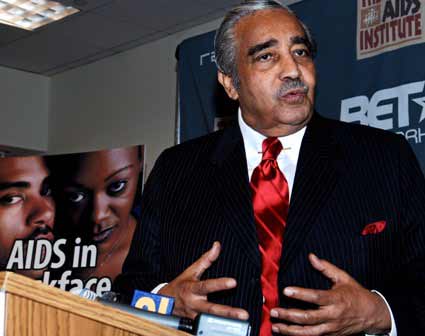 Charles Rangel speaking out on the fight against AIDS/AP

To Give Respect When it’s Due: Charles Rangel

No one currently in the United States Congress has the guts and might to say what is truly on his mind except Harlem’s own Charles B. Rangel. A member of Congress since 1971, he unseated the legendary Adam Clayton Powell to represent Harlem in Washington D.C. Charles Rangel, the heart and soul of the United States Congress stated in August 2006, that he will resign his seat if the Democrats did not take the House in November. The mid-term elections in November are so important to our country. The elections have been termed as a “cleaning of house” in which many hope that the Democrats will regain seats lost in Congress back in 1994. Well they did and the Dems came back with a vengeance passing important policies within the first 100 days of the 110th Congress.
As a native New Yorker, and as a past member of Mr. Rangel’s office, I feel a personal obligation to talk about him with the dignity and respect that he deserves.  He taught me a lot, and his teachings have carried me to my present situation in life. When the Democrats took control of Congress in the election, Representative Charles Rangel (D-NY) became Chairman of the powerful Ways and Means Committee. There was no way we could have possibly lost him without having felt his absence across the nation. No one has spoke out so adamantly against the miscalculations in Iraq or the Bush Administration’s economic policies, which he feels favor the rich over the poor.

Mr. Rangel is not afraid of saying what he feels is important and necessary. In response to remarks made by Venezuelan President, Hugo Chavez at the UN general assembly on September 20, 2006 and implying that Bush was the devil, Rangel said, “I want President Chavez to please understand that even though many people in the United States are critical of our president that we resent the fact that he would come to the United States and criticize President Bush… you don’t come into my country, you don’t come into my congressional district and you don’t condemn my president.”
Do not get the impression that Mr. Rangel is strong supporter of our President or his policies, but he values a certain thing called respect. In 2005, Rangel compared the President to Bull Connor, the former Public Safety Commissioner for Birmingham, AL, “George Bush is our Bull Connor.” In response, Vice President Dick Cheney during an interview said “I’m frankly surprised at his comments. It almost struck me; they were so out of line, Charlie was having some problem. Charlie is losing it, I guess.” Rangel shot back, “The fact that he would make a crack at my age, he ought to be ashamed of himself…He should look so good at 75.” That tenacity and energy is what we need on Capitol Hill and our country is in a better position now that Mr. Rangel runs at least some of the show.
Mr. Rangel is needed in the Congress, a champion of the people he is fourth in Seniority in the House only after Rep. John Dingell, Rep. John Conyers, and Rep. Dave Obey. The Co-Founder of the Congressional Black Caucus, he has been fighting for many years and his absence would have been felt across this country. Let’s take the time to appreciate this fighter and to make sure he sticks around for many more years to come.

Sumpter is a contributing writer for Regal Black Men’s Magazine.