Will the Next Generation of Leaders Please Stand Up? 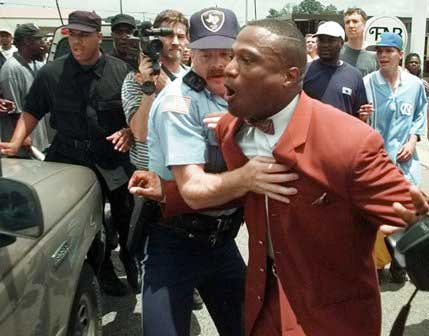 Will the Next Generation of Leaders Please Stand Up?

When an assassin’s bullet ended the life of Dr. Martin Luther King, Jr. in 1968, the Civil Rights Movement was at a crossroad.  Many people in the movement did not have supreme confidence, including Rev. Jesse Jackson, in King’s successor and confidant, Rev. Ralph Abernathy and consequently many of his protests ended in embarrassment.

Abernathy had been instrumental in the Montgomery bus boycott and the formation of the Southern Christian Leadership Conference but often clashed with the more charismatic Jackson over the organization’s direction after the assassination of King.

Nevertheless, Abernathy held the SCLC’s top position until 1977 when he ran unsuccessfully for the Georgia congressional seat.  Unfortunately, Abernathy did not have the leadership abilities of King, and the fierier Jackson replaced him in the hearts of many African Americans.

Jackson, along with other leaders such as Al Sharpton, would go on to lead the cause for Black issues well into the new millennium.

However, with new issues confronting the African American community, who will step up to the plate when the old school leaders pass on the torch to the younger generation?

Many within the Black community, such as renowned journalist Jason Whitlock, have recently criticized Jackson and Sharpton for attacking White bigots such as Don Imus and not spending adequate time addressing issues that have developed because of the behavior and apathy of African Americans.  Whitlock even went so far as to compare the current group of leaders to terrorists such as the Ku Klux Klan.

Whoever accepts the torch from our predecessors will not only have to deal with bigotry from White America but also internal problems in Black America such as drug abuse, violence, high rates of sexually transmitted disease and extremely high incarceration rates.

In a previous era, the younger generation looked to the preachers and teachers for guidance.  However, in the 21st century many young African Americans are turning to entertainers and athletes for that guidance and direction.

Rappers have become the role models in the new millennium, becoming huge influences in the world of fashion, jewelry and vehicles.  Unfortunately, many hip-hip artists seem more content to use their celebrity for negativity as opposed to promoting positive images for the younger generation.

If a rap artist can influence a teenager to buy a certain car or purchase a $1000 grill they can certainly persuade that same teenager to avoid the pitfalls of the thug life they so often glorify.

When an educated professional from corporate America counsels a young child, the child often views that adult as out-of-touch with the grim realities of poverty, drugs, and violence that they face on a daily basis.

However, those same children often relate better to athletes and entertainers who sometimes come from similar backgrounds and were able to succeed against the same seemingly insurmountable odds.

With that influence, many in the world of hip-hop could have the same impact that Dr. King and Malcolm X had on the youth of the 1950s and 1960s.

Imagine the late Tupac Shakur urging the youth of the 1990s to avoid the dangers of the street life by turning away from a life of crime and using their experience to encourage the younger generation to avoid the same pitfalls.

Imagine Kanye West urging the youth of today to pursue a college education and using that knowledge to have an impact on the less fortunate in American and in countries like Sierra Leonne.

Imagine 50 Cent using his experience as a drug kingpin who endured a vicious attack by his adversaries encouraging the next generation that they can climb any mountain and overcome any obstacle no matter how dire the situation may seem.

New Black Panther Party leader Quanell X is poised to take the torch from leaders like Jackson and Sharpton.

Quanell X began his career as a Nation of Islam activist after spending a brief time in jail for possession and dealing crack cocaine in 1989.  Once a “young street thug,” Quanell improved his image to set a better example for the young people he leads.  He is known for always wearing business suits and being clean cut.

The activist made a name for himself around the country for protesting the systematic discrimination that permeates through all levels of government and politics, often acting as a voice for oppressed people who have no voice.

Historically, Whites as well as Blacks have not always praised the voices of Black activists.  However, the need for young leaders to put their livelihood on the line for the betterment of their people will always be necessary as long as inequalities exist in American society.  The Black community is in desperate need of a unifying and uplifting voice to encourage the next generation to reach for the sky.  Will that next leader be you?