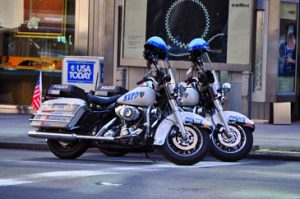 The New York Police Department (NYPD) has made history by naming Keechant Sewell as its new police commissioner.

Sewell will become the first Black woman, and first woman period, to serve in that capacity for the NYPD after her appointment by Mayor-elect Eric Adams.

In a statement released on Tuesday, Adams said, “Keechant Sewell is a proven crime fighter with the experience and emotional intelligence to deliver both the safety New Yorkers need and the justice they deserve. Chief Sewell will wake up every day laser-focused on keeping New Yorkers safe and improving our city, and I am thrilled to have her at the helm of the NYPD.”

A retired NYPD officer himself, Adams introduced Sewell at a Wednesday press conference in Queens, N.Y.

The mayor-elect ran on a platform of public safety and a vow to reform and strengthen the NYPD as residents grapple with an increase in violent crime.

CNN.com reported, “Sewell will take over a department struggling to tamp down a startling rise in gun violence and murders since spring 2020. NYC has had 443 murders so far this year, surpassing last year’s total and a 45% increase from just two years ago, according to NYPD data.

The new police commissioner grew up in the Queensbridge Houses in Long Island City, Queens.

She then dedicated 24 years of adulthood serving the community as a police officer in the Nassau County Police Department.

In a video, Sewell said, “I grew up in Queens. This is my city, and now this being my department, I feel like I’ve come full circle.

Most recently, Sewell worked as chief of detectives.

The new police commissioner received the job of chief of detectives in Sept. 2020.

She worked in the narcotics and major cases units.

However, the new police commissioner will move back into the city to better perform her duties.

On a personal note, some of Sewell’s hobbies include cooking and hosting dinner parties for friends.

When asked why he chose Sewell, 49, as the new NYPD commissioner, Adams said she, “exudes what it means to be emotionally intelligent.”

Adams went on to say that Sewell was “a proven crime fighter with the experience and emotional intelligence to deliver both safety New Yorkers need and the justice they deserve.”

The New York Times reported, “Chief Sewell comes from a department that has about 2,400 uniformed officers—less than a tenth of the size of the roughly 35,000 officers employed by the New York Police Department.”

A person with knowledge of the hiring process said that Adams found Sewell confident and competent.

The interview process also included a mock interview of a White officer accused of killing an unarmed Black man.

Chuck Wexler, the executive director of the Police Executive Research Forum, said that many had viewed Sewell as a rising star in policing circles for years.

Wexler said, “This is a case of someone identifying her early on in her career and moving her up. This is someone who has experienced every part of the department from patrol to internal affairs.”

The New York Times reported, “In January, Chief Sewell will take over the New York Police Department at what could be the most consequential moment in two decades. A national crisis of trust in American policing has emboldened efforts to reduce the department’s footprint, even as murder and shooting rates remain higher than they were before the pandemic. The relationship between the department and the city’s police unions is strained, and there have been growing calls for more transparency over policing tactics and disciplinary procedures.”

Many New Yorkers see Adams as the right person to bridge the gap between community and cops.

While campaigning, Adams criticized some liberal movements like the so-called defund the police campaign.

Adams has vowed to remove many of the guns from the streets.

Regardless of the obstacles that Sewell faces, she told the New York Post, “I’m here to meet this moment.”

She continued, “I’m very humbled to even be considered for this and it’s an extraordinary opportunity. And I take it very seriously, the historic nature of this.”

Despite all the problems facing the NYPD, Sewell understands, and embraces, the social relevance of her hire.

Sewell said, “What I’ve been able to accomplish, I hope it inspires women, young girls, men—anyone who wants to be an officer and be able to take advantage of the things that have been afforded to me. I would hope that they see representation. And representation matters.”

The new chief is the first Black police commissioner for New York in approximately 30 years.

She added, “I am mindful of the historic nature of this announcement as the first woman and only the third Black person to lead the NYPD in its 176-year history.”

Sewell continued, “I bring a different perspective, committed to making sure the department looks like the city it serves and making the decision, just as Mayor-elect did, to elevate women and people of color to leadership positions.”

In a press conference, Sewell said, “We are at a pivotal moment in New York. As our city faces, the twin challenges of public safety and police accountability. They are not mutually exclusive.”