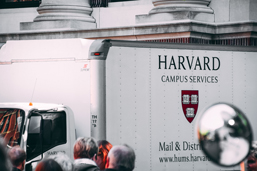 Fill up the moving vans at Harvard University because a new president will be moving into the office of student body president.

Vice President-elect Kamala Harris is not the only African-American politician shattering glass ceilings these days.

On Instagram, he wrote, “It’s hard for me to put into words how grateful I am to be elected Harvard Student Body President with my partner in crime Jenny Gan!! I will work tirelessly to make all of you proud over the next year.”

JacksonFreePress.com reported, “Harris ran on a platform of diversity of inclusion with future Undergraduate Council Vice President Jenny Gan, a junior from Cleveland, Ohio. Gan is studying neuroscience. The two said they want to focus on improving students’ mental and physical health.”

He added that his election victory represented so much to so many students because it came in a year of so much racial turbulence.

“I definitely don’t take it lightly,” Harris said. “Especially with everything that went on this summer with the death of George Floyd and Breonna Taylor and Ahmaud Arbery, all the protests that went on in this moment of racial reckoning in this country. This is a major statement by the student body to entrust a Black man with such an unprecedented moment in its history.”

In the past, Harris served as head of the campus’ Undergraduate Council, following in the footsteps of two other African-Americans who served in the same capacity.

In 2001, Fentrice Driskell held the title.

Driskell now serves in the Florida House of Representatives, recently winning her second term in office.

Tragically, Gable died when he got caught in the crossfire in a New York City shooting.

Harris also co-chairs the Undergraduate Council’s Black Caucus, serving as the treasurer of the caucus.

But his election represents the first time an African-American student got elected to lead the student body as a whole.

The government major added, “that we really have to be conscious about the decisions that we’re making and how we’re standing with all of our students of color and making sure that their college experience and just their livelihoods are as good as possible when a university like Harvard has so many resources.”

He also has lent his voice to his hometown Hattiesburg, Miss. newspaper, working as a guest columnist.

Harris wrote an essay entitled, “Thank you, John Lewis: We are the next generation of good troublemakers who will carry on” as a tribute to the late civil rights leader and congressman from Georgia.

The Magnolia State made news this month when Mississippi residents voted on a new state flag after deciding to do away with the old flag, which paid homage to the Confederacy.

Mississippi became the last state to remove an overt Confederate battle emblem from its state flag.

Harris said he would never forget the changing of the guard when it comes to the flag that represents his home state.

“As you can imagine, learning, sitting in Mississippi studies class and being like, ‘Oh, this is our state flag and it’s got a Confederate battle emblem.’ That was a rallying cry at a time where Black people were less than human, and it just makes you feel negatively towards yourself. Like how could it not,” Harris said.

He added, “It was an amazing moment in casting my ballot for the new flag in the November elections.”

Harris said, “A lot of people from the South will tell you, when you go places and you tell them, ‘Oh, I’m from Mississippi’, I’ve definitely gotten the jokes like ‘Do you have shoes?’ ‘Do you have running water?’ ‘Oh, do you also have Wi-Fi?’ ‘You speak in complete sentences.’ And hearing those things, it doesn’t feel great.”

But he tries to tell people that those stereotypes of Mississippi are not what he has experienced throughout his life.

“I want people to know I’m proud of who I am,” he said. “I’ve never shied away from it. I’m from Mississippi. I’m proud of that, too.”

In addition to representing Harvard and writing op-Ed’s for the local newspaper, Harris is also a published author of a children’s book.

The book is entitled “Successville,” and it hit the shelves of bookstores in February 2019.

Harris said, “[The book] came about as me trying to, as a community, uplift things and give back to the Hattiesburg-Oak Grove community that really built me up for so many years and continues to mold me into who I am.

“I knew I was going to Harvard, so far away, and I really wanted to send a message to kids in the area and just around, in general, and there’s so much talent here and so much God-given abilities. I just wanted them to know that if you work hard in school, if you set goals and develop talents, then you can really do anything.”

And anything definitely includes shattering the glass ceilings of politics, even in the Ivy League.