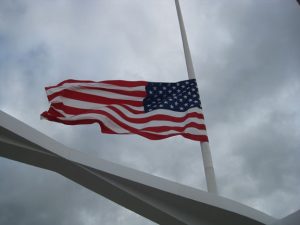 Flags across the country flew at half-mast to honor the life and commitment of the late Gen. Colin Powell.

On Oct. 18, retired Gen. Colin Powell died from complications from COVID-19 and other health ailments.

Although fully vaccinated, Powell suffered from underlying conditions like cancer that made him immunocomprised and more susceptible to the deadly effects of the coronavirus.

In a statement on Oct. 18, the Powell family said, “General Colin L. Powell, former U.S. Secretary of State and Chairman of the Joint Chiefs of Staff, passed away this morning due to complications from COVID-19.”

CNN reported, “Powell had multiple myeloma, a cancer of plasma cells that suppresses the body’s immune response, as well as Parkinson’s, Peggy Cifrino, Powell’s longtime chief of staff, confirmed to CNN. Even if fully vaccinated against COVID-19, those who are immunocompromised are at greater risk from the virus.”

Cifrino said that Powell received his second dose of the vaccine in February.

He planned to get the booster shot last week.

However, that plan got postponed when he fell ill and could not receive it.

The Powell family added, “We have lost a remarkable and loving husband, father, grandfather and a great American.”

Powell achieved greatness after coming from humble beginnings, the son of Jamaican immigrants.

Though not a great student as an adolescent, he went on to City College in New York before the ROTC and the military changed his life forever.

Powell became the first Black Chairman of the Joint Chiefs of Staff.

He became the first Black United States Secretary of State.

CNN reported, “Powell was a distinguished and trailblazing professional soldier whose career took him from combat duty in Vietnam to becoming the first Black national security adviser during the end of Ronald Reagan’s presidency and the youngest and first African American chairman of the Joint Chiefs of Staff under President George H.W. Bush. His national popularity soared in the aftermath of the US-led coalition victory during the Gulf War, and for a time in the mid-90s, he was considered a leading contender to become the first Black President of the United States. But his reputation would be forever stained when, as George W. Bush’s first secretary of state, he pushed faulty intelligence before the United Nations to advocate for the Iraq War, which he would later call a ‘blot’ on his record.”

In a statement, former President Bush said, “(Powell was) such a favorite of Presidents that he earned the Presidential Medal of Freedom—twice. He was highly respected at home and abroad. And most important, Colin was a family man and a friend.”

Although Powell often honestly admitted to not making great grades in school, education remained important to his parents and the adults around him during his upbringing.

According to the African American Encyclopedia, “One family story illustrates the family’s commitment to education: Once, while in the third grade, young Colin played hooky from school, but he judged time incorrectly and went home too early. Both his parents worked, but a family friend serving as a babysitter for several families caught Colin.

“For quite some time thereafter, a relative or family friend took Colin by hand, led him to school, and deposited him in the proper classroom.”

Powell would later graduate from Morris High School in 1954.

Then, Powell matriculated at City College of New York, graduating in 1958.

According to The African American Encyclopedia, “While in college, Powell joined the Reserve Officers’ Training Corps (ROTC). Before he was graduated, he became commander of the school’s precision drill team, the Pershing Rifles, and also a cadet colonel, the highest rank in the ROTC. The United States Army commissioned Powell, upon his graduation, as a second lieutenant.”

During his swearing in as the first Black U.S. Secretary of State, Powell said, “I think it shows to the world what is possible in this country. It shows the world that: Follow our model, and over a period of time from our beginning, if you believe in the values that espouse, you can see things as miraculously as me sitting before you to receive your approval.”

Although Powell dedicated much of his political life to the Republican Party and Republican presidents, in his later years he grew disillusioned with the far-right direction of the GOP.

Furthermore, he never supported former President Donald Trump in 2016 or 2020 and admitted publicly that he voted for President Joe Biden.

The president said, “Colin embodied the highest ideals of both warrior and diplomat. He was committed to our nation’s strength and security above all. Having fought in wars, he understood better than anyone that military might alone was not enough to maintain our peace and prosperity. From his front-seat view of history, advising presidents and shaping our nation’s policies, Colin led with his personal commitment to the democratic values that make our country strong. Time and again, he put country before self, before party, before all else—in uniform and out—and it earned him the universal respect of the American people.”

While many politicians from across party lines released messages of respect and admiration for Powell’s life of service, former President Trump took time to rip Powell in death.

Regardless, neither Trump or any other naysayer can rip Powell’s dedication to the United States of America because he showed throughout his career with service, sacrifice, leadership and class looked like.