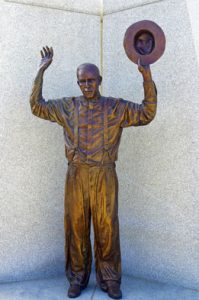 Reparations from the government have not come yet for the three survivors of the 1921 Black Wall Street massacre in Tulsa, Okla.

But that has not stopped donors Ed Mitzen and Lisa Mitzen of Business for Good from New York from gifting survivors Viola Ford Fletcher, 108, Lessie Benningfield Randle, 107, and Hughes Van Ellis, 101, with $1 million.

The Grio reported, “Ed Mitzen, a businessman and philanthropist, told reporters in Tulsa that he was prompted to make the donation after reading news reports about the massacre.”

The survivors filed a lawsuit seeking reparations in 2020.

On May 3, a Tulsa, Okla. judge ruled that the reparations lawsuit can move forward.

Ed Mitzen told The Washington Post, “I remember thinking it should not be this hard. In some ways, it felt like certain people were trying to run the clock out. We felt like it shouldn’t be this hard to get some sense of relief for what they went through.”

The Washington Post reported that Fletcher, Randle and Van Ellis accepted the donation May 18 at the Greenwood Cultural Center in Tulsa, Okla.

DeNeen L. Brown of The Washington Post reported, “Fletcher was 7 years old when White mobs attacked the Black neighborhood of Greenwood, a thriving business district known as ‘Black Wall Street.’ The massacre killed as many as 300 and displaced more than 10,000 Black people. In the days after the massacre ended on June 1, 1921, hundreds of massacre survivors were rounded up at gunpoint and marched to ‘internment camps,’ according to survivors’ testimony. No White person was ever arrested or charged.”

Testifying to Congress in May 2021, Fletcher said, “I will never forget the violence of the White mob when we left our home. I still see Black men being shot, Black bodies lying in the street. I still smell smoke and see fire. I still see Black businesses being burned. I still hear airplanes flying overhead. I hear the screams. I have lived through the massacre every day. Our country may forget this history, but I cannot.”

Van Ellis, Fletcher’s brother, told the congressional committee, “We were made to feel that our struggles were unworthy of justice.”

Brown reported, “None of the massacre survivors or their descendants was ever compensated by city or state officials for their loss. In 2005, the U.S. Supreme Court declined to hear a case that sought reparations for victims of the massacre. The case had been appealed to the Supreme Court after the 10th Circuit Court of Appeals ruled that the statute of limitations had passed for survivors and descendants to file a lawsuit against the state.

“In 2001, the Tulsa Race Riot Commission, which was tasked by the state of Oklahoma with investigating the massacre, recommended that officials conduct excavations to search for mass graves of massacre victims. The commission also recommended that the state make ‘direct payments to riot survivors and descendants.’ But no state or city reparations have been paid to survivors or descendants.”

He owned three businesses worth more than $500 million.

Ed Mitzen said, “Lisa and I got more money than we could dream of” when they sold one of their businesses.

Mitzen added, “We are just trying to help some people. We are not trying to be White saviors or political grandstanders. We just want to help.”

When Fletcher’s grandson Ike Howard told her about the donation, she said, “This is wonderful. It’s the largest donation I’ve ever received in my life. It’s wonderful news.”

Despite the donation, many Black Americans still want reparations from the government given to the survivors and descendants of the Tulsa race massacre of 1921.

Additionally, many still want reparations, from the government or businesses that built their wealth from slave labor, to go to the descendants of Black slaves since America has a history of giving reparations to oppressed communities.

Rashawn Ray and Andre M Perry of Brookings.edu wrote, “Reparations—a system of redress for egregious injustices—are not foreign to the United States. Native Americans have received land and billions of dollars for various benefits and programs for being forcibly exiled from their native lands. For Japanese Americans, $1.5 billion was paid to those who were interned during World War II. Additionally, the United States, via the Marshall Plan, helped to ensure that Jews received reparations for the Holocaust, including making various investments over time. In 1952, West Germany agreed to pay 3.45 billion Deutsche Marks to Holocaust survivors.

“Black Americans are the only group that has not received reparations for state-sanctioned racial discrimination, while slavery afforded some White families the ability to accrue tremendous wealth. About 15 percent of the enslaved shipped from Western Africa died during transport. The enslaved were regularly beaten and lynched for frivolous infractions. Slavery also disrupted families as one in three marriages were split up and one in five children were separated from their parents. The case for reparations can be made on economic, social, and moral grounds. The United States had multiple opportunities to atone for slavery-each a missed chance to make the American Dream a reality—but has yet to undertake significant action.”