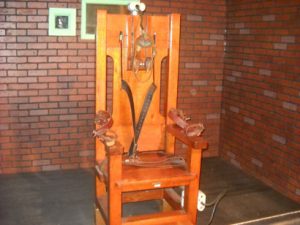 Several North Carolina preachers say that African-Americans of faith are being excluded from juries in death penalty cases.

African-American preachers from North Carolina have begun to speak out against the death penalty.

Many of the preachers not only have a problem with the death penalty on biblical grounds.

Those three clergymen harkened back to the work of pastor and philanthropist J.W. Hood who taught that a lack of representation in juries threatens the viability of a democracy.

The preachers wrote, “A century and a half after Hood spoke of the importance of jury service, a Wake County death penalty case is exposing the reality that Black people’s right to be represented in the jury box is still under threat in North Carolina.

“As Rev. Hood knew well, this perspective is the result of the African-American experience in the United States, which is shaped by the racist history of policing and the death penalty. Rules that do not recognize this fact make it impossible for us to work together toward a multiracial democracy.”

Kaylyn Womack of Yahoo Life reported, “According to the ACLU, Black people of faith tend to be disproportionately excluded from death penalty juries. Obviously, faith leaders would have trouble being deemed ‘death qualified’ because they don’t believe in the death penalty. Yet, prosecutors tend to strike out Black people in general from death qualification, believers or not.

“Experts found in Florida and North Carolina, where two Black men are facing the death penalty, that Black jurors are twice as likely to be removed from the jury than White ones, per the ACLU. This skews the jury and ends up putting a Black man in the hands of an all-White jury who probably decided ahead of time the defendant was guilty.”

Since 1976, African-Americans have accounted for 43 percent of executions.

Currently, 55 percent of those awaiting executions are African-Americans.

Those numbers are significantly disproportionate because African-Americans have consistently comprised less than 15 percent of the total United States population.

Critics of the justice system often complain that African-American communities are overpoliced in comparison to predominantly White communities.

The jurisdictions with the most minorities on death row include U.S. military (86 percent), Colorado (80 percent), U.S. government (77 percent), Louisiana (72 percent) and Pennsylvania (70 percent).

According to the American Civil Liberties Union (ACLU), “While White victims account for approximately one-half of all murder victims, 80 percent of all Capital cases involve White victims. Furthermore, as of October 2002, 12 people have been executed where the defendant was White and the murder victim was Black, compared with 178 Black defendants executed for murders with White victims…

“In January 2003, researchers at the University of Maryland concluded in a study commissioned by the Maryland governor that defendants are much more likely to be sentenced to death if they have killed a White person.”

In 2001, the Supreme Court of New Jersey released a report that found that the death penalty law is used more often if a person is accused of killing a White person.

Furthermore, the University of North Carolina conducted a study from 1993 to 1997 that discovered that defendants received a death sentenced at a rate of three-and-half times more often if they killed a White person as opposed to killing an African-American.

From 1983 to 1993, the odds of someone receiving the death penalty in Philadelphia increased 38 percent when the defendant was African-American.

According to the ALCU, “University of Iowa law professor David Baldus found that during the 1980s prosecutors in Georgia sought the death penalty for 70 percent of Black defendants with White victims, but for only 15 percent of White defendants with Black victims.

Now, only 27 states have the death penalty.

The U.S. Department of Justice (DOJ) discovered that the death penalty is also applied disproportionately by race in federal cases.

African-Americans, Hispanics and Asians made up the 18 prisoners (on death row) of color.

The DOJ discovered that U.S. attorneys recommended capital punishment 36 percent of the time when the defendant was Black, and the victim was not Black.

However, when both the defendant and the victim were Black, attorneys sought capital punishment in only 20 percent of those cases.

Based on statistics that proved racial bias in death sentences, the ACLU suggested a moratorium on the death penalty to address the issue.