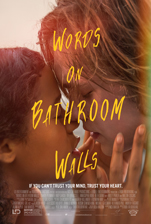 Getting Comfortable in One’s Skin

Many people do not treat people with a physical illness as a leper or an outcast.

Furthermore, since mental illness affects people differently, cures do not exist to eliminate the illness.

Therefore, those who suffer with mental illness do so without the hope of a full recovery, just hopes to maintain normalcy in a world that constantly tells them that they are not normal.

In “Words on Bathroom Walls,” Adam (Charlie Plummer, “Boardwalk Empire”) is not normal to be perfectly honest.

He suffers from schizophrenia and hears voices in his head.

Adam wakes up with those voices.

And Adam goes to sleep hearing those voices.

The only time Adam experiences true peace and tranquility, without those voices, is in the kitchen where he has the talent to become a legendary chef although he is just in high school.

In an artistic sense, Adam is like the late soul singer, Donny Hathaway.

That brother had a velvety voice.

He was a maestro on the piano.

But he had demons because he too suffered from schizophrenia.

His illness, reportedly, resulted in his death in New York in the late 1970s.

However, while living, Hathaway found the perfect duet partner to help deal with his demons and distractions.

In “Words on Bathroom Walls,” can Adam find a duet partner who will not judge him because of his illness, but instead help him create beautiful works of art via his talent in the kitchen?

Adam has a true partner in his mother who like many mothers will do anything to make her son whole again.

For many years, Adam and his mother had the perfect partnership after his father left the picture.

However, when a new man named Paul (Walton Goggins, “The Unicorn”) comes into his mother’s life, the once harmonious home could become a cacophony of harsh and jarring sounds.

But when a stepson has a mental illness, the type of stress and judgment can make an already hard existence that much harder.

Paul even brings plastic eating utensils into the house because they pose much less of a danger than actual silverware, obviously.

Adam can find solace in friendships at his local school, though.

His friend Todd (Aaron Dominguez, “Shaft”) does not judge Adam because of his illness.

However, when an accident occurs in chemistry class through no real fault of his own, Adam becomes persona no grata at his school.

His classmates begin referring to Adam as “Straight Jacket.”

Adam transfers to a Catholic school during his senior year of high school even though he does not really believe in God.

Nevertheless, he has to graduate high school before he can take his talents to culinary arts school.

The Catholic school admits him on a probationary basis.

Therefore, it is imperative that Adam takes his clinical trial drugs so that he does not have another incident like he did at his previous school.

Young Maya has a little Selah (Lovie Simone) in her from the Prime Video movie, “Selah and the Spades.”

Maya has the image of a nerd.

However, she runs the underworld at the Catholic school.

Her underworld activities, though, have the potential of ruining everything she has worked for.

In “Words on Bathroom Walls,” Adam calls Maya “Bernie Madoff” when he finds out about her unethical activities.

Maya and Adam begin to bond after she agrees to tutor him in his hopes of graduating on time.

However, can Adam keep his secret from the inquisitive, Maya?

And if she finds out about his condition, will she leave him like former friends, classmates and even his own biological father?

In “Words on Bathroom Walls,” she befriends a troubled teenager and helps him find his way.

But in “Waves,” after the incarceration of her character Emily’s brother Tyler (Kelvin Harrison Jr.), the roles reverse as she leans on her new friendship with Luke (Lucas Hedges) to help her withstand the problems in her life.

“Words on Bathroom Walls” deals with two dynamics that are important to a teenager’s development.

The “Words on Bathroom Walls” movie touches on the importance of true relationships and friendships to help navigate life.

Additionally, “Words on Bathroom Walls,” deals with the need for young people to become comfortable in their own skin and to embrace all of their differences and eccentricities.

Adam is able to lean on his relationships with his mother, Maya and an unlikely bond with Father Patrick (Andy Garcia, “Kill the Messenger”).

The Catholic school provides an opportunity to confess to a priest, which forces Adam to discuss his issues with someone outside of his family home.

That unlikely relationship might help Adam get through his last year of high school.

However, accepting reality is arguably the best message from “Words on Bathroom Walls.”

High school can be a time of uncertainty.

But if a person can accept who they are, and find a support system, greatness probably will find them.

“Words on Bathroom Walls” does a good job of promoting that message without becoming too preachy.

For some, “Words on Bathroom Walls” might be a little too bizarre with Adam’s struggle with mental illness.

But if one can overcome the challenges of mental illness, the sky’s the limit.

“Words on Bathroom Walls” is in theaters now.