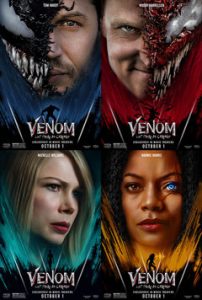 In Hollywood, dark can work.

In Hollywood, demented can work.

In Hollywood, even dorky can work sometimes.

All that works in favor of “Venom: Let There Be Carnage” because the movie is dope despite the wackiness sometimes involved.

No matter what, Marvel and DC Films revolve around the same theme as action movies.

In “Venom: Let There Be Carnage,” Hollywood shows that good and bad guys do not even have to be human to fit that theme.

The good guys and the bad guys could be aliens or monsters.

But “Venom: Let There Be Carnage,” shows that all monsters or aliens are not created equal when it comes to destructiveness.

While most monsters or aliens are bad, some have a heart for doing what’s right, while others have nothing but ill will in their so-called hearts.

His luck as a reporter changes, however, when he bonds to an alien that invades Earth and decides to stay after taking a liking to his new planet.

With an opportunity to further resurrect his journalistic career in the follow-up “Venom: Let There Be Carnage,” Eddie gets the opportunity to interview serial killer Cletus Kassady (Woody Harrelson) about the carnage he left on the outside before getting thrown behind the cages of the penitentiary.

Cletus grew up in a home for unwanted children.

No one ever understood him but the love of his life, Frances Barrison (Naomie Harris).

However, the couple gets separated as young people when the home realizes that they cannot control Frances’ powers.

Frances’ voice alone is enough to topple any adversary.

As a result, Frances is placed in a maximum-security facility where she gets evaluated regularly by a psychiatrist.

Frances’ only contact with the outside world comes from periodically reading the local newspaper.

Therefore, it comes as no surprise when Cletus wants to sit down for interviews with Eddie.

Talking to Eddie, and having his story printed regularly, can become a tool to talk to his girlfriend Frances while both sit in confinement.

In “Venom: Let There Be Carnage,” local law enforcement officials like Detective Mulligan (Stephen Graham) also like the idea of Eddie interviewing Cletus because he believes if Eddie can get Cletus to open up, then they could possibly actually find out how many dead bodies Cletus is responsible for.

If Cletus opens up to more murders, not only would families find potential closures, but the governor might also even reinstate the death penalty because Cletus’ murderous rampage was so evil and nefarious.

In “Venom: Let There Be Carnage,” Cletus gives Eddie headlines and quotes to print verbatim.

Unlike many journalists, Eddie consents although allowing a subject to dictate how a story turns out violates many rules of journalism.

Nevertheless, Eddie gets what Detective Sullivan and others in law enforcement want, information about countless other murders by Cletus.

But what many people around Eddie do not know is that all the information about Cletus’ unsolved murders do not come from the horse’s mouth.

Some of the information comes from the ingenuity of Eddie’s extraterrestrial friend, Venom.

The alien Venom lives inside of Eddie’s body and sometimes forces its way out even though Eddie tries to keep the alien contained.

Eddie even talks to Venom while others are around.

To the passersby, it looks like Eddie is losing his mind and talking to himself.

But to those in the know, it is apparent that Eddie has a little help in his journalistic quests from a being from another realm.

Unfortunately, when Eddie gets what he needs, with a little help from Venom, from Cletus, the serial killer on death row gets something from the journalist as well.

Cletus bites into Eddie during one of the reporter’s prison visits.

But Cletus, almost immediately, knows something is wrong with Eddie’s blood because he has tasted the human blood of many of his victims.

Therefore, Cletus knows there is something different about Eddie.

However, he does not know how different Eddie is until it is time for his execution in front of some of his victims’ family members.

In “Venom: Let There Be Carnage,” the darkness comes from Venom himself.

Although Venom is a good alien, per se, he still has those monster urges that Eddie tries desperately to control.

Aliens like Venom get their nutrition by eating human heads and brains.

But Eddie has gotten Venom to live off a diet of chicken and chocolate.

Nevertheless, at any time Venom could go back to his more heinous eating habits.

In “Venom: Let There Be Carnage,” the dorkiness also comes from Venom who has grown impatient with Eddie wanting him to stay low key.

When Venom goes to a costume party, he begins to believe that people love him as he is despite Eddie telling him for years that aliens will scare human beings.

Obviously, the dementedness of “Venom: Let There Be Carnage” comes from the diabolical serial killer Cletus and his evil lover, Frances.

The couple seems to become eviler as they sit behind bars instead of rehabilitating.

While “Venom: Let There Be Carnage” is a dope movie, the dorkiness might be a little too much.

Some of the jokes are lame, but that’s what makes it a “Venom” movie.

But with talent like Hardy, Harrelson and Harris, “Venom: Let There Be Carnage” has to many H’s (aka high-profile stars) not to be a hit movie.

The elements of the movie work together.

Furthermore, the talent works well with each other too.

“Venom: Let There Be Carnage” receives a rating of three out of four crowns.