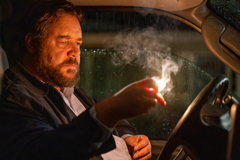 Whodini’s breakthrough album “Escape” had classics for days like the title cut, “Friends” and “Five Minutes of Funk.”

The album made the New York based group superstars on the pop charts.

Therefore, the album “Back in Black” had such a build up that I can still remember discussing it with my cousin Chris all of these years later.

The build up to movies returning to the theaters feels the same way as “Back in Black” did decades ago.

But when things come with much anticipation, that anticipation can lead to a let down for people who listened to the hype.

Or it could lead to biased opinions in its favor because people just really missed what they had in the past.

However, “Unhinged” will not disappoint for moviegoers needing an adrenaline rush after the boredom of the quarantine.

And while “Unhinged” has its required predictable and head-scratching moments, the movie industry is back in business and “Unhinged” is not a bad film for a theater reboot.

Many of us have become unhinged at some point in time no matter how even tempered we are.

Many of us have had a significant other work our last nerve.

And many of us have had a boss that we could not wait to go off on.

However, many of us also have a filter.

People that have some sort of self-control know when to go off and when to just go on about their business without entertaining the foolishness of the world.

Unfortunately, in the movie “Unhinged,” The Man (Russell Crowe, “The Water Diviner”) does not have said filter or any self-control.

He has endured a bad divorce.

The Man had to deal with “The Man” at the job after a workplace injury.

And he has to deal with jerks in traffic that do not know how to control their road rage.

And when two people come together and neither one knows how to control their rage, out of control violence often ensues.

“Unhinged” opens up with The Man popping pills and throwing away his wedding band.

With a hammer in hand, The Man walks up to a house and bashes the door down before bludgeoning his ex and her new man before setting the house on fire.

At another local home, as his mother tries desperately to take him to school after waking up late again, Kyle (Gabriel Bateman, “Annabelle”) is mesmerized by the news of the brutal murders and the house explosion.

However, his freeloading uncle Freddy (Austin P. McKenzie) insists on turning the news off just before the juicy details of the story are disclosed.

What really should matter is Kyle getting to school on time.

Because his mother Rachel (Caren Pistorius) is always oversleeping, she often gets Kyle to school late.

Furthermore, Rachel is often late getting to the hair salon where she works as a hair stylist.

Her tardiness, not only upsets her son, but it also upsets her clients.

She is in danger of losing her best client, which only adds to the stress of a rough day.

It seems as if when one oversleeps, or has a huge meeting, traffic has another plan for the person that day.

No matter if Rachel takes the highway or the service road, her trip to Kyle’s school runs into detours.

That is the last thing Rachel and Kyle need considering that they are already tardy.

If Kyle is tardy one more day, he has to go into detention for 30 minutes.

When it finally seems that Rachel has found a break in the traffic jam, she runs into a commuter who must not know that a green light means go and not stop.

She blows her horn very demonstratively at The Man who refuses to go despite her desperate pleas.

Rachel instead just drives around him believing that the encounter is over.

But when The Man pulls up beside Rachel and Kyle, he lets her know that he did not appreciate her demonstrative honks when a courtesy tap of the horn would have sufficed.

The Man asks Rachel to apologize for her behavior at the stoplight.

However, when Rachel refuses The Man really becomes unhinged, which obviously not only puts Rachel’s safety in danger, but also Kyle’s safety.

The Man begins following Rachel throughout town, determined to make her day as rough as possible since he did not get the sufficient apology that he sought.

And if he became unhinged at the sight of his ex-wife with a new man, he takes crazy to another level after his run-in with Rachel and Kyle.

There is nothing special about the storyline or performances in “Unhinged.”

But the fact that people will relate to the dangers of road rage is what makes “Unhinged” worth a watch.

Like many suspense, or horror films for that matter, “Unhinged” will cause moviegoers to scratch their head at some of the decisions that the characters make.

But movie fans will rejoice that they at least have something to scratch their head about after having no theatrical experiences for the last few months.

When “Back in Black” from Whodini finally dropped, the album did not have the same amount of classics as its predecessor.

The album did not have the timeless classics as “Escape,” but it gave fans more Whodini music after waiting so long without it.

“Unhinged” does the same thing as “Back in Black.”

It gives moviegoers something that they have yearned for, for a long time.