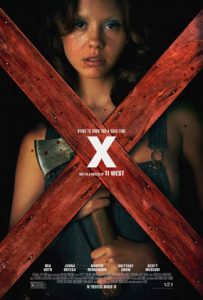 How can a filmmaker go wrong when they combine the best of two evil worlds, adult films and horror films?

How can a filmmaker go wrong when they combine references of “Debbie Does Dallas” with the creepy female dolls commonplace in many horror films?

The answer is filmmaker Ti West cannot and did not go wrong with “X,” a film that combines two devilish genres of films and presents it in an avant-garde and old school way that feels like 1970s rural Texas, for better or worse.

People often see Hollywood and fame as an escape from obscurity and poverty.

Many people will do anything to achieve fame and fortune, whether they do it via moral avenues or immoral avenues.

In “X,” a young film crew, led by a middle-aged executive producer, have decided to take the immoral or amoral route to stardom.

If the aspiring stars and filmmakers can produce an adult film with enough cinematic quality, they could become rich overnight with the popularity of home videos sweeping the nation in 1979.

The advent of home videos allows perverts to be unapologetic and unashamed because their perversion can be kept within the four walls of their own home and not amongst a crowd at an adult theater or adult bookstore.

However, as soon as the filmmakers, thespians and executive reach the rural property, they receive a cold welcome from the elderly couple who advertise their home for rent.

In “X,” when Wayne goes to the front door to check in to their rental, he is met by Howard (Stephen Ure, “The Hobbit: The Desolation of Smaug”) and his shotgun.

When Howard realizes Wayne is just a tenant in for the night, he puts his shotgun down and “welcomes” the young people to his property.

But there is still something off about Howard.

He might be the ugliest person ever, to paraphrase the words of Jackson.

Furthermore, his wife does not make the place feel more normal either.

She just stares at the young people from an upstairs window as they move their equipment and luggage into the boardinghouse.

Making matters worse, her peeping Tom ways do not end once the young people settle into their rental, and that is where the real problems begin.

Many people in the rural Texas town have a love for the Lord that seems to border on fanaticism.

In “X,” whether the young people go into Howard’s home or a convenient store, a televangelist (Simon Prast, “Xena: Warrior Princess”) is speaking over the television airwaves about the dangers of sin and the damnation in Hell that awaits unrepentant sinners and nonbelievers.

With religion playing such a big part in the people lives in that community, how will they take to a group of city slickers from Houston flaunting their sinful ways on camera on their “holy” property?

Despite the eavesdropping and creepy vibes, the group is determined to shoot their film, which is entitled “The Farmer’s Daughter.”

And despite the weird energy that the old couple gives off, their property is perfect for a movie entitled “The Farmer’s Daughter” because it consists of acres of beautiful farmland with a barn filled with cows and other farm animals.

But adult films do not do well because of the rural scenery, or even the script, although RJ takes pride in his screenwriting and filmmaking talent.

He plans to film “The Farmer’s Daughter” in avant-garde style to make the film look classier than its limited budget would suggest.

Nevertheless, adult films do well because of the adults participating in adult activity on screen.

The performances of those adults will determine if “The Farmer’s Daughter” catapults the participants into the Hollywood stratosphere.

While Snow made a name for herself in the television drama “American Dreams” playing a goodie-goodie, she is extremely convincing as an XXX-rated actress in “X.”

Unlike Keshia Knight Pulliam who unconvincingly played a prostitute in “Tyler Perry’s Madea Goes to Jail,” Snow’s performances as Bobby-Lynne in “X,” will quickly make her old fans forget about her role as Meg Pryor on “American Dreams,” which ran from 2002-2005.

Often, rappers get criticized for nabbing movie and television roles from seasoned actors and actresses.

However, Kid Cudi holds his own against more seasoned thespians like Snow, doing a very solid job in “X.”

Those new to his acting skills will walk away with respect for him as a true actor and not as a rapper trying to make an extra check as an actor.

Additionally, Henderson’s performance as Wayne epitomizes the 1970s, as he plays the character like a mix of Tom Selleck and John Ritter.

But “X,” is more complex than just a horror and/or adult film.

The characters in “X” have layers, like the internal struggle that exists when someone knows they are participating in sinful activities, but the temptation to do it outweighs the cost on the person’s soul.

Unlike a filmmaker, a real person can actually go wrong when their love for a sin conflict with their love of the Lord.