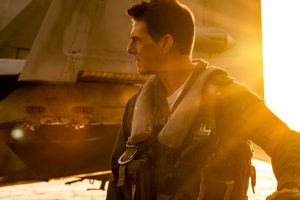 Youngsters might get offended by the following, but oh well.

Everything seemed better in the 1980s.

The music was better.

The stars in Hollywood seemed bigger than life.

The grass was greener.

The sky was bluer.

The technology was better.

O.K., that’s enough of that because no one, even 80s babies, would say the technology from 40 years ago was better than it is now.

That would make a pretty cool mix of greatness.

Well, “Top Gun: Maverick” does a cool job of blending the old school nostalgia of the 1980s with music and flashbacks with current technology and current foreign affairs to create a dope trip down movie memory lane.

In “Top Gun: Maverick,” Pete “Maverick” Mitchell (Tom Cruise) is still a loose cannon when he is in the cockpit of an airplane.

The Navy should have gotten rid of him years ago because of his antics.

But he is so darn talented and unique, he still finds a place for himself in the Navy despite upsetting several admirals.

Maverick is kind of like that talented athlete or entertainer that teammates and group mates tolerate because they are superstars, and their cohorts know that those superstars can naturally do things that no one else is talented enough to pull off.

Despite Maverick’s talent, though, his Navy department is on the verge of getting scrapped because he has not been able to pull off a mock 10 in his plane.

Even when his superior Rear Admiral (Ed Harris) comes on base to inform the people in the program that they are getting scrapped, Maverick sees it as one last chance to achieve the evasive mock 10 in his plane, therefore giving Rear Admiral no choice but to keep the program afloat.

To put it mildly, Rear Admiral is not amused by Maverick’s bold, and insubordinate, attempt.

While Rear Admiral might want to give Maverick his walking papers, the daredevil pilot still has admirers in high places like Iceman (Val Kilmer) who wants the number two pilot in their Top Gun class to come back to the program.

However, Iceman does not want Maverick to return to Top Gun as a pilot.

He wants Maverick as a teacher because the new group of Top Gun pilots have a mission so daunting only Maverick could figure out a way to pull it off.

Out of all the top pilots in the Navy, Maverick can only choose a certain amount to pull off a mission to destroy a uranium enrichment plant.

The mountainous and cavernous terrain, along with technology that can detect intruding planes, makes the mission almost like a death sentence.

Unfortunately, death and Maverick have a stressful and long relationship because some people still blame him for the death of his best friend Goose (Anthony Edwards) in the original “Top Gun” from 1986.

Honestly, Maverick is still haunted by the death of Goose even though the Navy found Goose’s death to be accidental, absolving Maverick, and his reckless reputation, from the death.

Decades later when Maverick has a stressful mission in the sky, he asks the spirit of Goose to talk to him and help him complete his assignment.

Even though the Navy has forgiven him, what about Goose’s family?

Do they forgive Maverick?

What about Goose’s young son Bradley “Rooster” Bradshaw (Miles Teller, who is perfectly casted as Goose’s son from a physical appearance standpoint) who was just a toddler when his father tragically died at sea in Maverick’s arms?

Can Rooster forgive Maverick even though he grew up fatherless and only has stories of his father’s exploits in the Navy?

How will Rooster act when he finds out he must answer to the man that he blames for father’s death?

And how will that affect the mission to destroy the uranium enrichment plant, while getting back home safely?

“Top Gun: Maverick” starts off nostalgic but ends with new characters that fans will come to embrace as much as they did when the original dropped.

The introductory music in “Top Gun: Maverick” remains the same.

The wording describing the Top Gun program and what led to its creation is the same.

Maverick has pictures of his old friend Goose in his locker.

The Top Gun base is littered with images of young Maverick, Goose and Iceman.

In “Top Gun: Maverick,” the title character even frequents the same bar as he did back in the day.

And Maverick still has a way with the ladies.

However, decades of growth will mature the Lothario from back in the day, chasing stability more than one-night stands.

But will his personal maturity ever carry over to professional maturity before he actually does get someone seriously hurt, or worse?

Maverick even still does his infamous tower flyby in “Top Gun: Maverick” and it still upsets his superiors like it did decades ago.

“Top Gun: Maverick,” like most of Cruise’s movies, will not get rave reviews from an acting standpoint.

But summer movies are Cruise’s wheelhouse.

Summer movies are about stars.

Movies in the summer are about big budgets, big action scenes and big special effects and technology.

“Top Gun: Maverick” has those 3B’s and then some.

The movie is the rare sequel that is better than the original.

And that fact can be accredited to the marrying of the best of both worlds, which includes 1980s nostalgia, old school music, likable characters, acrobatic planes and explosive crashes with modern technology and modern world affairs.