Movie Review: ‘Tom Clancy’s Without Remorse’ Would Be Regular Without Jordan, Conspiracy Theories 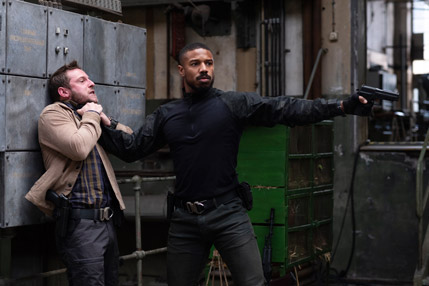 Now that the pandemic has begun to come to a hopeful conclusion, Michael B. Jordan, and Hollywood for that matter, hope to come back with a bang.

And in “Tom Clancy’s Without Remorse,” Jordan’s latest film begins with an explosion and concludes with the same intensity, despite somewhat falling victim to the typical action film formula.

“Tom Clancy’s Without Remorse” explodes because of Jordan’s star power, the twists and turns of the storyline and the believability of the plot in this conspiracy theory obsessed era.

In “Tom Clancy’s Without Remorse,” John Kelly (Jordan) is the best of the best when it comes to the military, more specifically the Navy SEALS.

He is stationed in Aleppo, Syria and his team has just gotten the assignment from Robert Titter (Jamie Bell) of rescuing a CIA operative, held in captivity possibly by the Syrians.

However, when the American soldiers raid the Syrian safe house where the CIA operative is allegedly being held, they find no Syrians around.

As a matter of fact, everything they find in the so-called safe house has links to Russia, not Syria.

After a little bit of digging, Kelly and his team discover that the so-called safe house is an actual Russian arms depot.

While Kelly and his team are mad at the bad intelligence that they receive from Ritter, the bogus mission does not take away from Kelly’s future plans.

He returns to the States to be with his pregnant wife, Pam Kelly (Lauren London).

The two will become the proud parents to a beautiful daughter in the very near future.

As a result, John has begun to seriously contemplate retiring from the military to take a much safer job working for a private security firm.

However, John’s past in Aleppo and the botched raid of the Russian arms depot, never totally fades from his memory.

And when his colleagues from the raid end up getting murdered one by one, it puts the entire United States military on notice.

Unfortunately, John does not receive the notice of impending doom until it is too late, and the assassins show up at his front door while his pregnant wife sleeps alone in the master bedroom.

At 9:43 P.M. on a fateful night, the same killers that have previously attacked his colleagues cut the power off in John’s home while he is downstairs listening to music from his computer with his headphones.

Nevertheless, the former special ops unit member has not lost his skills just because he is technically now a civilian and away from the battlefields of the Middle East.

And even when John is in chill mode, he never is totally oblivious to potential harm after spending his entire career on the battlefield.

Although many of his colleagues succumb to the bullets of the assassins, John proves a little too hard to kill in “Tom Clancy's Without Remorse.”

His talent with a gun turns him from a possible assassination victim to a killer of multiple home invaders.

Unfortunately, one of the home invaders gets away after he shoots and injures John, causing him to get rushed to the hospital.

After his release from the hospital, John makes it his personal revenge mission to find out the identity of the only survivor that invaded his home, placing his pregnant wife in danger.

However, a change in character occurs for John when he realizes that much of what his superiors have told him about his missions and enemies might not prove true, making him a pawn in someone’s evil plans of becoming a king.

But being a true soldier, John is determined to show these so-called kings what a pawn could do to wannabe royalty when they figure out the rules of the game.

Unfortunately, when John takes his revenge mission too seriously, he discovers he has more enemies, both foreign and domestic.

“Tom Clancy’s Without Remorse” possesses nothing out of the ordinary for an action film as far as the plot is concerned.

The film has fire fighting scenes.

But what “Tom Clancy’s Without Remorse” does have is a bona fide star in Jordan, who proves with this performance that he could be a summer blockbuster movie action star as if that was ever in question with his immense acting skills.

Furthermore, “Tom Clancy’s Without Remorse” will satisfy the large number of conspiracy theorists around the country who do not believe much of what the government or the media tells them.

Many conspiracy theorists often believe that the government is more nefarious than they truly are.

“Tom’s Clancy’s Without Remorse” will definitely satisfy that crowd.

Additionally, “Tom Clancy Without Remorse” plays into American politics during times of peace as well as times of war.

Often, American unity exists during times of tragedy or when the country has a true enemy.

However, when Americans have no enemies abroad, they often make other countrymen their enemies and the film depicts what might happen if America had no true enemy.

Furthermore, while Jordan shines as usual, “Tom Clancy’s Without Remorse” leaves much to be desired with London’s brief performance.

Nevertheless, it is good to see London back on the screen after the tragic death of her companion and father of her child, rapper Nipsey Hussle.

As a matter of fact, Pearce’s performance as a government operative in “Tom Clancy’s Without Remorse” will remind some moviegoers of his role in “Lawless.”

And while “Tom Clancy’s Without Remorse” does not produce the biggest bang in the world, it is gratifying to see Hollywood banging out summer blockbusters like in the old days, pre-pandemic.