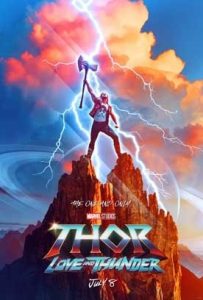 In “Thor: Love and Thunder”, Thor (Chris Hemsworth, “Spiderhead”), with some help from friends, is back to save the day and the universe.

This time, he must battle an antihero and gods to save others from an untimely demise.

And just like in other “Thor” movies, “Thor: Love and Thunder” is an effective combination of Thor’s usual quirkiness with an abundance of love and heart.

Initially, “Thor: Love and Thunder” presents a dilemma that all are faced with at one time or another.

How do you respond when you have lived a righteous life and kept the faith, but have not seen your faithfulness rewarded?

Not only is your faithfulness not rewarded, but it is mocked and ridiculed by those who should be moved by your faith.

Although he has kept his faith in the gods and cried out for help during his time of desperation, his prayers go unanswered and are made fun of.

Imagine the anger that would develop if a person prayed to the gods desperately to save their life and the lives of their loved ones, only to be ignored and ridiculed by the entity that was supposed to protect them.

Therefore, when Gorr develops the power to lash out at the gods, he does not limit his wrath to the ones that mocked him.

Vengeance is his says the Gorr, and he makes it his mission in “Thor: Love and Thunder” to punish every god for what he sees is their punishment of him and his loved-ones.

One would think that superheroes and gods could easily dispatch of an antihero like Gorr.

However, when the antihero has a secret weapon that can bring gods down to their knees, the world and the natural order of the universe could soon see its demise at the hands of a bitter, angry and vengeful demon.

Ironically, in “Thor: Love and Thunder,” Thor has more in common with football hero Rob Gronkowski, especially “Gronk” from a couple of years ago.

While the football universe kept spinning and other superheroes of the gridiron got their shine, “Gronk” made himself satisfied in retirement.

But when the GOAT (Greatest of All Time) god Tom “Terrific” Brady needed reinforcements to battle the antiheroes known as the rest of the National Football League (NFL), Tommy Terrific coaxed the “Gronk” out of retirement to fight the antiheroes of the NFL like the Kansas City Chiefs, Los Angeles Rams and New Orleans Saints.

A similar storyline develops for the happy-go-lucky Thor who is summoned to come out of retirement to defeat some enemies.

While Thor is forced out of retirement, his lost love Jane Foster (Natalie Portman) is fighting off enemies herself.

Only her enemy is in the form of stage four cancer.

With Jane’s medical condition, she has no business exerting herself physically or mentally.

Jane should be focused on enjoying her last days, while hoping for a miracle.

However, when Gorr the God Butcher begins putting everyone in danger because of his vengeful wrath, Jane joins her ex-boyfriend Thor, King Valkyrie (Tessa Thompson, “Sylvie’s Love”) and Korg (voiced by Taika Waititi, “Jojo Rabbit”) to hopefully put an end to Gorr’s frightening reign of terror before it is too late.

While the end of the world, death of the gods and total annihilation of decent life would cause many to tremble in horror, Thor, as always, responds to possible extinction with humor, lightheartedness, and no worries whatsoever.

His eccentric confidence seems to rub off on his team as well as they do not take the destruction of life itself that serious.

King Valkyrie has her eyes on Thor’s ex.

However, that potential love triangle does not threaten their camaraderie.

That is probably so because King Valkyrie has no chance with Jane.

Thor’s ex-girlfriend still has eyes for Thor, even though they are no longer together.

But there is some disloyalty amongst the team.

Thor’s trusted hammer was once loyal to him.

Now, it has eyes only for Jane.

However, the fact that Thor still has an affinity for his old hammer makes his current weapon extremely jealous of his ex-weapon.

Eccentricities like jealous weapons is what makes “Thor” movies what they are and represents why fans love the character so much.

However, “Thor: Love and Thunder” contains some added elements that will make this installment stand out even more.

Prepare for some A-list cameo appearances in “Thor: Love Thunder.”

Although Marvel films are filled with superstars, “Thor: Love and Thunder” contains brief appearances by icons.

To trump all other Marvel films, “Thor: Love and Thunder” features the king of the gods in Zeus (Russell Crowe.)

The veteran actor portrays Zeus in a “Wizard of Oz” kind of way, and that is not necessarily a good character trait.

Nevertheless, the scene featuring Thor and Zeus is worth its weight in gold.

That particular scene is fire.

Furthermore, it is amusing.

But despite how fire “Thor: Love and Thunder” is, some might consider the quirkiness as corniness.

But even if people find some aspects of “Thor: Love and Thunder” corny, it is hard not to like the movie’s heart and humanity.