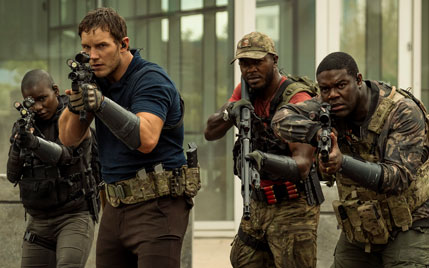 “The Tomorrow War” falls into the same category of the movie adaptation of “Baywatch.”

Going in, not much is expected.

But at the end of “The Tomorrow War,” viewers are pleasantly surprised that it is not below average.

While “The Tomorrow War” will not get confused with great cinema or great artistry, it is not a waste of time especially over the Fourth of July weekend.

Hollywood has done alien invasions and zombie apocalypses to death.

One of the best of the last decade is “World War Z” with Brad Pitt.

In “The Tomorrow War,” Dan is frustrated with his current life.

He served his country admirably in the Iraq War.

Dan has a beautiful wife Emmy Forester (Betty Gilpin) and a daughter Muri (Ryan Kiera Armstrong) that shares his love of science.

The war veteran even has a steady job as a biology teacher at a local high school in Miami.

But he would love to get a job in the private sector.

The only impediment to that dream is the fact that Dan does not have any private sector experience.

Companies do not even think he has any leadership experience even though he led fellow soldiers in battle.

But regardless of his frustrations in the workplace, he has a wonderful family to come home to at night.

At a Christmas party at their home, however, their loving homelife gets shattered permanently when something unthinkable occurs while the partygoers enjoy a game of soccer on television.

Seemingly, some extraterrestrial beings with guns just appear out of the sky and interrupt the soccer game while thousands of fans look on in amazement at the stadium.

While fear grips those at the soccer stadium as well as those watching on television, the visitors inform those at the game that they are really them from the future.

They have come from 30 years in the future to be exact.

As a result, the entire planet enacts the first ever worldwide military draft.

Why do those in the future need help from people in the present?

Those in the future need help from their elders from the present day because the aliens have killed so many humans that the Earth’s entire population is down to just 500,000 people.

When a person’s, male or female, draft number is called, they have no choice but to get transported 30 years into the future to stop the inevitable end of the world.

To make sure that people do not think of evading the draft, the government places a bracelet on every draftee’s arm so that they know where they are at all times.

The problem with drafting everyone is that everyone is not capable of succeeding on the battlefield.

Some have no military training at all, and they are thrown into a battlefield 30 years into the future to fight aliens that seem indestructible.

But with people like Dan having military experience, maybe there is a chance that the measly 500,000 people can save the world from almost certain annihilation.

“The Tomorrow War” succeeds because of the heart in the film.

At the core of the film is a story about family and doing everything possible to protect and save someone that is family.

Furthermore, “The Tomorrow War” deals with the difficulty of maintaining the family unit through the trials and tribulations in life.

In “The Tomorrow War,” Dan is a great husband and father.

However, he has animosity in his heart for his father James Forester (J.K. Simmons) because of the way James treated his mother years earlier.

Dan will not even allow his father to have a relationship with his grandfather despite the efforts of James.

The absentee grandfather still sends Christmas cards to Muri even though he has never actually met his granddaughter.

However, there is something about near death experiences that can bring estranged family members together.

When a life and death situation arise, people tend to forget all their past beefs and instead try to mend broken relationships before it is too late.

Furthermore, when family comes together the battles in life seem less difficult to conquer.

Additionally, some of the fighting and action scenes are decent in “The Tomorrow War.”

Apart from the soccer scene in which people come from the future, which is kind of cheesy, “The Tomorrow War” has adequate looking action scenes.

And despite Pratt’s obvious star power, “The Tomorrow War” benefits from some good performances by Sam Richardson as Charlie and Edwin Hodge as Dorian.

Charlie is like the annoying neighbor or co-worker who will not stop talking.

They mean well but can just come across as aggravating.

Charlie also has an expertise in an area that might help in the mission to save the world from an alien invasion.

Dan and Charlie form a bond after they are paired together during basic training.

On the other hand, Dorian cannot stand Charlie, initially because he talks so much.

Traveling into the future lets Dorian know that he does not have much time to live regardless of how the tomorrow war turns out.

Therefore, he has lost all fear of the aliens and death because he has determined to go out on his own terms.

As a result of the positives outweighing the negatives, “The Tomorrow War” is worth a watch on Amazon Prime Video, especially since it is a movie about a war coming out on a weekend the celebrates victory in another war.