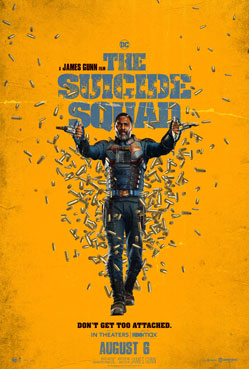 Let’s just get this out of the way as soon as possible.

Different and weird is an understatement when describing “The Suicide Squad.”

But that does not stop “The Suicide Squad” from being a dope movie and better than its predecessors including, “Suicide Squad.”

Shall we begin with the weirdness?

“The Suicide Squad” has giant starfish and little starfish that are deadly and venomous.

However, on the big screen the starfish looks more cartoonish than criminal.

The starfish in “The Suicide Squad” will remind movie fans of a certain generation of the stay puft marshmallow man from “Ghostbusters.”

It is hard to think of a character like the stay puft marshmallow man as menacing.

But “The Suicide Squad” kind of pulls it off with the starfish, despite the corniness.

Did we mention that creepy-looking weasel in “The Suicide Squad?”

Next, shall we look at the cliché and formulaic aspects of “The Suicide Squad?”

It seems that many Hollywood action and superhero movies contain the same plotline.

Unfortunately, if the evil weapon falls into the wrong hands then it will be catastrophic for the entire world.

Therefore, the good guys must prevent the bad guys from obtaining this dangerous weapon.

In the end, the good guys usually triumph over those with bad intentions.

“The Suicide Squad” contains some elements of that formula, with some twists and turns, obviously.

Nevertheless, despite the eccentricities and the predictability of “The Suicide Squad,” it is still a killer film.

In “The Suicide Squad,” a coup has overthrown the government of the country, Corto Maltese.

While military coups happen often, this coup has gotten the attention of the American government because of what the new Corto Maltese government has access to.

The new government has access to a project that could wreak havoc on that particular country and the entire world.

While the rest of the world might view Corto Maltese and its leaders as a harmless and small country, access to the project would definitely make the new leaders of Corto Maltese forces to be reckoned with.

The project is not just a physical or a biological weapon.

That project is an actual beast that if released upon the world, would cause total annihilation and devastation.

But the American government also wants to keep this mission under the radar and off the books.

As a result, the government creates Task Force X, or the Suicide Squad, consisting of violent criminals, imprisoned throughout the country for various crimes.

Although the criminals do not have much of a choice, if they agree to join the Suicide Squad, they could possibly see their prison sentences reduced significantly if they join this new black-ops group.

Despite the formula and despite some of the ridiculousness of “The Suicide Squad,” the movie has bona fide movie stars and fire, but brutal, action scenes.

It seems that no matter what film or television show Idris Elba appears in, he delivers in his roles.

From playing a drug dealer trying to go legitimate in “The Wire” to freedom fighter Nelson Mandela in “Mandela: Long Walk to Freedom” to a single father trying to raise three daughters in a drug-infested environment in “Tyler Perry’s Daddy’s Little Girls,” Elba always shines.

Furthermore, John Cena has already become one of the biggest action movie stars on the planet after a career as a professional wrestler, much like Dwayne Johnson’s movie star ascension.

While Cena obviously does not have the acting chops of Elba, his chemistry with Elba in “The Suicide Squad” gives the movie much of its personality.

The rivalry between Elba and Cena’s character is both competitive and comedic, simultaneously.

Like Elba, whatever role Davis takes from film to television, she murders it.

While many of her movie roles have featured Davis as the morally upright woman, “The Suicide Squad” is one of her more nefarious roles, and we are definitely here for it.

Davis shines no matter how bright or how dark her character is.

Moreover, “The Suicide Squad” has the naughty sex appeal of Margot Robbie as the infamous, Harley Quinn.

Robbie has a way of making murder and mayhem look appealing in “The Suicide Squad.”

She also brings comedy like Cena, especially when she cannot remember the names of her Task Force X comrades.

Furthermore, “The Suicide Squad” has the star power of Pete Davidson from “Saturday Night Live.”

Most importantly, “The Suicide Squad” has all the action that a superhero movie needs to succeed.

While Marvel has cornered the superhero or comic book movie market to an extent, DC has gotten comfortable in their own skin.

Except for movies like “Black Widow,” Marvel movies seem more upbeat, while DC films like “Joker” and “Suicide Squad” seem much darker.

Although DC received much criticism for some dark films like “Batman v. Superman: Dawn of Justice,” DC has found its niche with those dark films, with the exception of “Wonder Woman,” which is upbeat like a Marvel movie.

As a result, “The Suicide Squad” epitomizes a film company that has found their lane and has stayed in that lane.

Unfortunately, the movie loses its steam with the corny and outrageous ending featuring those darn starfish.

But the conclusion cannot totally ruin the buildup and that makes it worth the watch.