Movie Review: ‘The King’s Man’ Best to Date from Franchise 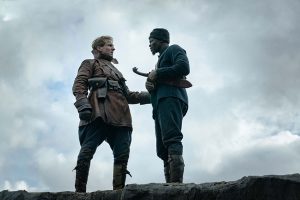 The back story from “The King’s Man” makes it the best movie of “The Kingsman” film franchise.

Obviously, back stories serve an important role in movies, television stories and even novels.

Even regular human beings have a back story and knowing that back story will help people better understand why people do what they do.

Just think about it.

People outside of a certain community do not understand the term Historically Black Colleges and Universities (HBCU), with some in that community calling HBCUs racists.

Many from that community do not know that HBCUs came about because Black students could not attend predominantly White institutions because of segregation.

Furthermore, many HBCUs were founded by White philanthropists or state governments run by White politicians.

Even the term HBCU came from United States legislators in the 1960s who were mostly White.

If more people knew that back story, a lot of racial misconceptions would go away concerning those colleges.

Likewise, the Kingsman organization has a back story.

That back story is much more interesting than any of the present day “Kingsman” movies released thus far.

His job for the British government places him in the company of some powerful world leaders.

Unfortunately, that job places him in danger too when war breaks out.

When Emily and Young Conrad visit a campsite for soldiers, an unexpected gun battle breaks out that leaves Emily mortally wounded, while Young Conrad watches in horror from afar.

Before succumbing to her injuries, Emily makes Orlando vow that he will never let Conrad see the battlefield.

The dying mother wants her husband to use his power and influence within the government to keep Conrad from having to fulfill any military duty.

Orlando does not hesitate to comply.

But little did he know at the time that Conrad (Harris Dickinson) would grow up to become a fearless and thoughtful protector of his country despite his pampered upbringing.

Throughout his upbringing, Conrad trained with Shola (Djimon Hounsou) on the art of self-defense and on the artistry of using knives in battle.

Unfortunately for Conrad, Shola and Orlando, their potential “opps” (opponents or opposition) do not fight with knives anymore.

The new “opps” prefer to use guns.

And the first rule of warfare or battle is to never bring a knife to a gunfight.

The official storyline of “The King’s Man” reads, “In the early years of the 20thcentury, the Kingsman agency is formed to stand against a cabal plotting a war to wipe out millions.”

To set off this war, the cabal intends to assassinate Archduke Franz Ferdinand of Austria (Ron Cook), which they hope will force other European countries into war.

But when Conrad uses quick thinking to foil the assassination plot, he temporarily saves several European countries from a catastrophe.

In “The King’s Man,” a cruel twist of fate leads to an eventual assassination of Archduke Franz Ferdinand.

As a result, a multi-country war ensues.

And despite Orlando’s promise to his dying wife and his best efforts to keep Conrad from harm, the young man has a love for his country that cannot be denied by anyone.

His loyalty is more to his countrymen than himself and the wishes of his parents.

His determination to do something for his country leads him into the military even though the elite status of his family could have kept him out of harm’s way and very far way from the frontlines of war.

In “The King’s Man,” the character Conrad resonates because he represents destiny or someone with a calling on their life.

No matter what his parents envisioned for his life, Conrad, or someone else, had a higher purpose for his life that would resonate with those who came after him for generations to come.

Many people serve their country because they must, such as a military draft, etc.

Others join the military because it gives them a path to a better future.

Then there are those true heroes like Conrad who would leave a life of luxury because they feel an obligation to serve something bigger than them like country.

Americans saw the same phenomenon in real life when former Arizona Cardinals defensive back Pat Tillman left his million-dollar NFL lifestyle to serve his country after the terrorist attacks on Sept. 11.

By while professional football players are known for their roughness and grit, Conrad has the same heroic characteristics of Tillman but with more panache and suaveness, which is apropos for a Kingsman.

Dickinson portrays Conrad with an obvious regal air to him.

But people from privilege often receive the stereotype of soft, etc.

In “The King’s Man,” Conrad proves that one cannot judge a book by its cover.

Additionally, Conrad proves that where a person comes from does not necessarily dictate where they end up.

His dedication creates an agency still in effect in “The Kingsman” movie franchises.

Thankfully, “The King’s Man” shows fans how and why that agency came about in the first place.

And “The King’s Man” sits in first place amongst the films in the franchise.