Movie Review: ‘The Hitman’s Wife’s Bodyguard’ Silly, But Does Have Some LOL Moments 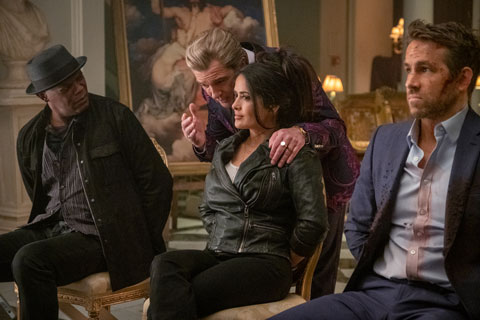 Movies get greenlit just to entertain a certain audience, and many do not contain much depth.

On the other hand a film is something that pushes the artform and culture to another level via its storyline, acting or cinematography, etc.

“The Hitman’s Wife’s Bodyguard” definitely does not meet the film definition.

In fact, “The Hitman’s Wife’s Bodyguard” is a silly movie and not in a good way.

Nevertheless, “The Hitman’s Wife’s Bodyguard” does have some laugh out loud (LOL) moments that makes it bearable at times.

Therefore, the movie will definitely find an audience amongst those who want a cheap laugh and some violent action after over a year of isolation and quarantine.

In “The Hitman’s Wife’s Bodyguard,” Michael Bryce (Ryan Reynolds) is like topflight security of the world, for real, to paraphrase Day-Day (Mike Epps) in “Friday After Next.”

Michael works as a bodyguard, protecting some of the most powerful political figures in the world.

He even earns the respect of his peers, winning the Triple A Bodyguard of the Year Award.

But despite his success in the field of bodyguarding, Michael can never escape his failures on the job.

Michael has protected most of his clients from danger.

But one of his clients meets a fatal outcome when hitman Darius Kincaid (Samuel L. Jackson) is able to shoot one of those important clients.

Unfortunately, failure on the job takes a toll on Michael.

Even when he accepts the Triple A Bodyguard of the Year Award, he can still see Darius in his mind, laughing at all his failures.

It is as if Darius is at the awards banquet, in the flesh, laughing at the fact that Michael has fooled his peers into thinking that he is a superb bodyguard.

The toll that losing a client to Darius’ bullets has such an adverse impact on Michael that he must see a psychologist to help him deal with his stress.

When many people think of a shrink, they think of someone with patience who has seen it all or heard it all.

However, Michael is so crazy and obsessed with his job that his psychologist cannot wait to get him of out of her office and end their sessions.

She suggests that Michael take a break from bodyguarding to go on vacation.

The psychologist suggests that Michael visit Capri, Italy and Michael’s response is, Capri like the pants?

But even while on vacation, Michael finds himself in the middle of a violent dilemma as bullets fly all around him as he obliviously listens to music on his headphones, while other vacationers are struck down in a hail of gunfire.

Right before the hail bullets takes Michael out on vacation, he is snatched up by Darius’ wife, Sonia Kincaid (Salma Hayek).

Although Michael has vowed to stay away from guns while he is on his bodyguarding sabbatical, Sonia has made no such vow of nonviolence.

Sonia does not have a problem busting her guns, and she and Michael are able to initially escape a near death.

Regardless, sometimes mistakes turn out well because couples, or trios in this instance, can sometimes be a match made in heaven.

However, that is only true if a person’s definition of heaven is raunchy sex on the side of road, strange adult adoptions, lithium overdoses and over the top violence.

“The Hitman’s Wife’s Bodyguard” is not a terrible movie.

But it is not a very good movie by any stretch of the imagination, either.

It is not even that enjoyable if the definition of film fits your taste more than the aforementioned definition of a simple movie.

It is a silly movie in a foolish way, and not always in a comical way.

That is not to say that the movie does not have funny scenes, as stated.

With Reynolds and Jackson playing in their usual type casted roles, it would be hard to be totally unfunny.

However, providing good, thought-provoking cinema might not be the aim of “The Hitman’s Wife’s Bodyguard.”

After a year of lockdown because of the coronavirus pandemic, maybe what the world needs is thoughtless humor, action and violent scenes.

But “The Hitman’s Wife’s Bodyguard” does not do much to showcase Jackson, Hayek and Reynolds in unique ways.

Their performances in “The Hitman’s Wife’s Bodyguard” are par for the course, with Jackson playing his usual loud and profane character, while Reynolds plays the well-intentioned, but not so intelligent air head.

And although the movie makes fun of her age, the beautiful actress has aged like fine wine.

Watching Hayek grace the silver screen almost makes up for the lack of depth in the storyline and the sophomoric humor.

Hollywood once said eight is enough.

But in this case, two is enough.

In actuality, two installments may be too much because stopping at the original “The Hitman’s Wife” was probably the best course of action.