Movie Review: ‘The Forgiven’ Not Unforgivable, But Not Very Good Either 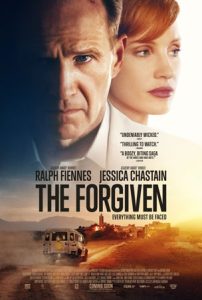 For Westerners, traveling to the Middle East or Africa might produce some apprehension and fear.

Over the last 20 years or so, terrorism has loomed large when it comes to Westerners traveling to other ends of the world.

The adequate, but not very good, movie “The Forgiven,” captures that fear and captures the stereotypes that many in the East have for Westerners like their arrogance and lack of respect for their beliefs and customs.

“The Forgiven” begins in a peculiar way in comparison to many movies.

On the contrary, “The Forgiven” begins with the closing credits.

Writer-director John Michael McDonagh must have channeled his inner-Kyrie Irving when making that interesting decision.

Brooklyn Nets star point guard infamously stated, “Normal people keep the world going, but those who dare to be different lead us into tomorrow.”

Let’s hope “The Forgiven” does not lead filmmaking into tomorrow because mediocrity should not become the goal of future filmmakers.

And unfortunately, “The Forgiven” is more forgettable than forgivable.

In “The Forgiven,” Jo Henninger (Jessica Chastain, “Molly’s Game”) and her husband David Henninger (Ralph Fiennes, “No Time to Die”) have come to a fork in the road in more ways than one.

The spark has gone out on their relationship.

That often happens when a couple has been together over a decade.

The Henningers do not necessarily outright fight or argue.

But they just seem to be not very impressed with each other.

Jo seems to want to have more fun in life, while David looks down upon everyone and everything.

Despite the turbulence in their marriage, the couple decides to accept an invitation to a lavish party put on by their old friend Richard Galloway (Matt Smith, “Morbius”) and his partner Dally Margolis (Caleb Landry Jones, “American Made”) at their vacation estate in Morocco.

The couple’s vacation home stands in stark contrast to the poverty that surrounds them in the Northern African country.

While many Moroccans struggle to make ends meet, selling fossils and other trinkets to tourists, Richard and Dolly live the lives of kings.

Their palatial estate looks like a castle for royalty, equipped with Moroccan servants who say nothing, but oppose of Richard and Dolly’s sexual orientation and lifestyle.

Many in Morocco are devout Muslims.

Therefore, many of the residents of the country look down on the couple, calling them unbelievers, infidels and much worse like the F-word.

However, the hatred that the couple receives means very little to them until the fateful first night of their opulent extravaganza.

In “The Forgiven,” David and Jo must decide which direction they will go when they approach a fork in the road for their marriage.

Furthermore, the couple must also decide which direction to take when they come to the fork in the road trying to find Richard and Dally’s home.

Maps do not seem to help much when they try to locate the palace.

Additionally, modern technology like GPS does not help much either because they are in the desert and in the middle of nowhere.

Moreover, because the couple finds themselves on the dirt roads so late, vision becomes a significant problem for them on their way to Richard and Dally’s home.

The conditions, lack of technological help and somewhat intense discussion the couple has on the way to the home causes David to become distracted.

As a result, David hits and kills a fossil selling merchant who is in the road at the wrong time as the couple passes through, driving much faster than they should.

The fact that the couple is White and in a Northern African country might cause the locals to demand street justice.

The fact that the couple are friends with the infidels might not help their cause either in the court of public opinion.

In “The Forgiven,” David’s arrogance and aloofness might not help the situation when it comes to seeking forgiveness for the tragic accident.

While “The Forgiven” is not much to talk about, it does portray what it is like for Westerners to live and visit “Muslim” countries at a time of much polarization, and the danger that polarization can put everyone in when different worlds collide.

Despite “The Forgiven” having A-list stars like Chastain and Fiennes, none of the great actors in this film had enough to make the movie great.

Everyone in “The Forgiven,” including co-stars like Smith and Jones, have given better performances in other movies so the fault is not their own.

Chastain has “The Eyes of Tammy Faye” on her resume.

Smith has “Last Night in Soho” on his resume.

And Jones has “Get Out” on his resume.

Therefore, everyone deserves a mulligan because everything a person does is not going to be a homerun.

But McDonagh does have to take some blame, unfortunately because “The Forgiven” is his baby.

As a writer and director, McDonagh must give such brilliant actors more to work with.

The visuals of “The Forgiven” are up to par, especially the scenes at Richard and Dally’s house.

One scene in “The Forgiven,” perfectly sums up the division going on Morocco when it comes to the locals and the interlopers.

While locals are questioning David after the car accident leaves a boy dead, beautiful fireworks go off in the background of the couple’s home.

Things like that crystalize why there is so much tension between East and West.