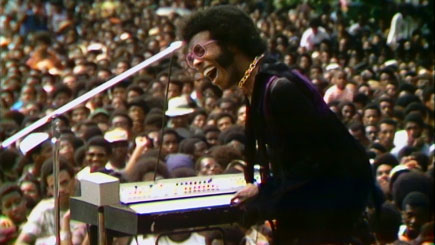 Sly Stone performing at the Harlem Cultural Festival in 1969, featured in the documentary, "Summer of Soul" (Photo courtesy of Searchlight Pictures/20th Century Studios).

As a youngster, I often wondered why urban music did not have a music festival equivalent to Woodstock.

During the 1990s at the apex of hip-hop and R&B’s modern golden era, I sat down and listened to 2Pac’s “All Eyez on Me” and thought an urban music festival would be an epic event.

Little did I, or many others, realize that the concept had already come to fruition before my birth in 1969.

The Harlem Cultural Festival, captured in Questlove’s “Summer of Soul,” presented a funky but spiritual experience for Black America at a time in which the country seemed headed towards destruction because of systemic racism and police brutality.

To many people of my generation, 1990s music had no equal.

Hip-hop had become the dominant music force in Black America.

Furthermore, some of the best R&B groups of all time like Jodeci, Boyz II Men, TLC and others came from that same era.

But something special existed in the late 1960s and early 1970s.

Urban artists of that era did not just make music to jam to.

Many of those artists made music that made people think.

Artists such as Sly and the Family Stone, The Staples Singers, Stevie Wonder and Nina Simone made music that expressed Black pride or expressed the need for all races to come together in harmony.

Therefore, when organizer Tony Lawrence put together a free summer concert series in Mount Morris Park in Harlem, N.Y., the party had a specific purpose.

In July 1969, the country was only one year removed from the assassinations of Martin Luther King, Jr. and Senator Robert F. Kennedy, a Democratic presidential candidate in 1968.

The assassination of King had touched off riots in many American cities.

Six years after King’s iconic “I Have a Dream” speech, many in the Black community had grown impatient with the nonviolent approach to equal justice.

Some even advocated outright violence as a method of overturning the racist American status quo.

Therefore, the Harlem Cultural Festival might have been an attempt by the powers that be to get the Black community “funkdafied” and not fighting in the streets.

And get funky they did, but not without calls to fight for the dignity and equality of Black Americans.

Harlem Cultural Festival singers like Simone told the audience the importance of being young, gifted and Black.

Sly and the Family Stone told the crowd, they’ve got to live together because they were all everyday people.

Gospel music fans got to hear the Edwin Hawkins Singers talk about a happy day.

And when reminiscing on the death of King, Mahalia Jackson and Mavis Staples told their precious Lord to take their hand.

Racial tensions are at an all-time high.

Some are even threatening to take us back to the 1960s with voter suppression tactics.

But for a brief moment in 1969, the best of soul, pop, African, Caribbean and gospel music reminded people in the Black community how powerful artists and community leaders can be if they use their platforms to enact change.

The current music landscape might not have as many icons as it did during the 1960s.

But that has not stopped the current generation from using their music to change the world.

Artists like H.E.R., Nas, Royce da 5’9, Goodie Mob, Ant Clemons, Trey Songz and Black Pumas have all used their music to shine a light on current social and political issues.

But there is nothing like going back to yesterday and “Summer of Soul” does that wonderfully with performances by David Ruffin, The 5th Dimension, the Chambers Brothers, Hugh Maskela, Moms Mabley and B.B. King.

“Summer of Soul” is part concert and part documentary.

Try not to dance, sway or bob your head as Wonder plays songs like “Shoo-Be—Doo—Be—Doo-Da-Day” and it would just prove that you do not have any soul or taste in music.

Although “Summer of Soul” does have some heavyweight interviewees like Gladys Knight, Marilyn McCoo and Billy Davis of The 5th Dimension, Lin-Manuel Miranda, Sheila E. and Chris Rock, it is the interviews or the regular attendees, many of them children or teenagers in 1969, that makes “Summer of Soul” as soulful as it is.

And although the footage from that concert had not seen the light of day since 1969, the visuals are splendid especially since videographers did not have lights when shooting.

Concert organizers had to have the stage face the sun so that the video recordings would have adequate lighting.

But what is heartbreaking about “Summer of Soul” is the racism that made the concert series a necessity and the racism that kept the contents of the remarkable festival hidden for generations.

Woodstock got all the media attention because the musicians were mostly White, and the audience was mostly White.

Although Woodstock was synonymous with drugs and other outlandish behavior, the Harlem Cultural Festival was a peaceful, community and family affair.

However, media executives did not care about a Black music festival or Black musicians.

As a result, until Questlove resurrected the festival with “Summer of Soul,” it was as if it never occurred.

Even some young festival attendees had to question did they really get to see so many legendary acts for free during the summer of 1969.

And now, the rest of the world gets to see what they saw, in part.

Hulu should acquire the rights to the entire recording of the music festival and put it out to the masses.

And Black artists of today should take heed to what their predecessors did and create something similar that gives a voice and hope to people in their communities dealing with the same issues 52 years later.