Movie Review: Storyline in ‘Jurassic World Dominion’ Not Up to Par, But Cool to See Gang Back Together 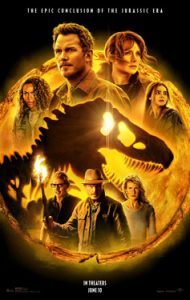 Steven Spielberg changed the game in 1993 with the original “Jurassic Park,” combining lovable characters, great action, superb special effects and polarizing antagonists to create a brand that has taken on a life of its own.

Nevertheless, it is hard to keep a fresh storyline going when filmmakers have done everything from theme parks to rescue missions in previous installments.

As a result, the storyline in “Jurassic World Dominion” comes across at times as uninspiring.

However, the return of some favorite characters from the franchise’s past makes up for any shortcoming in “Jurassic World Dominion.”

After the previous installments of “Jurassic World” and “Jurassic Park,” people have come to the realization that they have to co-exist with creatures that had gone extinct millions of years before.

Because of the greed of several capitalists, dinosaurs have risen from the grave and the history books to inhabit the Earth once again.

But what scientists and capitalists once kept to remote islands near Costa Rica, have invaded every space of the world.

In “Jurassic World Dominion,” a black market of dinosaur sells has thrived.

Poachers have even begun to steal dinosaurs to fatten their pockets.

In “Jurassic World Dominion,” people have begun to breed dinosaurs for profit like dog breeders do.

Unfortunately, poaching and breeding leads to the mistreatment of animals and captivity.

And in “Jurassic World Dominion,” the billions that come from manipulating DNA and breeding extends from the regular hustlers on the street to the ultra-rich who seem to have no ethics and morals when it comes to how they manipulate science for gain.

But like many evil scientists trying to play God have shown, pushing the boundaries when it comes to science can lead to catastrophe like it has in previous installments of the successful dinosaur franchise.

In “Jurassic World Dominion,” and its predecessor, the science has not only led to the creation of dinosaurs.

It has also led to the creation of human beings in a cloning type of manner.

In “Jurassic World Dominion,” Maisie Lockwood (Isabella Sermon) desperately wants to know who she is and exactly where she comes from.

Maisie knows that she is basically a direct clone of her “mother” who as a scientist was able to reproduce a child without the help of a biological father.

Because of her mother’s ingenuity, Maisie is a direct DNA match to her mother, but without some of the genetic defects or health problems that her mother possessed.

The fact that Maisie is like a perfect person genetic wise, makes her the target of poachers, breeders and people on the black market, who previously only targeted dinosaurs.

To protect Maisie, Owen Grady (Chris Pratt) and Claire Dearing (Bryce Dallas Howard) have taken on the parental duties in raising Maisie and keeping her out of harm’s way.

But as many parents of teenagers can attest, keeping a restless teenager locked in her room in perpetuity is basically an impossible task.

Therefore, Maisie eventually slips out of Claire and Owen’s reach and into the hands of kidnappers who have the responsibility of stealing her and shipping her off to scientists who want to study her DNA.

Likewise, those same kidnappers want to steal Beta, a baby dinosaur born to Blue from the previous “Jurassic World” film.

Like Maisie’s mother, Blue has given birth to a baby dinosaur by herself, with perfect DNA.

The scientists at the company Biosyn want to study Maisie and Beta so that they can obviously profit from this scientific development.

Despite the greed of the scientists/capitalists at Biosyn, the company still has some ethical employees who want to expose the company for its scientific experiments that could possibly destroy the world’s food chain, putting human and animal life in grave danger of extinction.

Those ethical employees including Ian Malcom (Jeff Goldblum), bring back the old duo of paleontologists Alan Grant (Sam Neill) and Ellie Sattler (Laura Dern) to expose the danger of evil scientists and bring some safety to the planet despite the damage that has already been done.

“Jurassic World Dominion” will dominate the box office this weekend because of its large fanbase, obviously.

However, it will also dominate because it brings back some of the characters that fans loved the most.

While some things have changed for the characters, like marriage and divorce, their personalities remain the same

The chemistry still exists between Grant and Sattler.

He still is sensible too.

Some of Wise’s past roles include the Netflix series “She’s Gotta Have It,” based on Spike Lee’s first film of the same name from 1986, “Fatherhood” and “The Harder They Fall.”

While she has shined in those Netflix releases, taking her talents to the “Jurassic Park” franchise represents another level for her stardom.

Wise definitely deserves that large platform, and she definitely shines in this future blockbuster.

But the characters and the action do not always make up for the lackluster storyline.

Although “Jurassic World Dominion” disappoints a little because of the lack of imagination when it comes to the plot, the franchise is too big, popular and successful to not rebound in the very near future or resurrect from extinction.