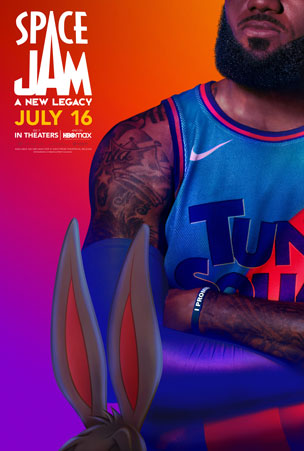 “Space Jam: A New Legacy” is what one would expect of a sequel 25 years after the original.

While the storyline in “Space Jam: A New Legacy” is not as interesting as the original starring Michael Jordan, the LeBron James version dazzles with graphics that are out of this world, literally.

Furthermore, “Space Jam: A New Legacy” has a message that all parents should pay attention to when raising their own children.

Just like the original “Space Jam,” in “Space Jam: A New Legacy” the opening montage of the movie centers on the exploits of the movie’s star character.

In the original, young Michael Jordan practices basketball until all hours of the night, showing that competitiveness that arguably made him the greatest basketball player of all time.

“Space Jam” highlights Jordan’s special bond with his father who was more of a baseball fan than a basketball fan.

Nevertheless, when Jordan is cut from his high school varsity basketball team as a sophomore, it creates a burning desire in him to become the best the game has ever seen.

Jordan accomplishes his goal on the hardwood, then pursues a career in professional baseball like his father wanted.

Not wanting to go, Bugs Bunny challenges the aliens to a game of basketball in the original “Space Jam,” and gets Jordan to leave the baseball diamond to play basketball one more time.

In the opening montage of “Space Jam: A New Legacy,” LeBron’s upbringing with his single mother is the focus.

Early on, LeBron is known to be a prodigy of the court, and his coaches encourage him to expect excellence and nothing else.

Although LeBron has a love for video games, his coach lets him know that he could be a once in a generation talent if he stays focused and works hard.

“Space Jam: A New Legacy” then highlights LeBron’s legacy on the court and beyond.

The movie shows highlights of his high school career, his tenures with the Cleveland Cavaliers (twice), the Miami Heat and the Los Angeles Lakers.

“Space Jam: A New Legacy” then shows LeBron’s commitment to helping others with his charter school and his commitment to equal rights and ending systemic racism.

But in “Space Jam: A New Legacy,” Lebron’s children are struggling with the fact that they must follow in the footsteps of a legend.

LeBron got to where he is in life because of how hard he worked and how serious he took basketball because that was the only avenue that he saw that led out of his childhood predicament.

He pushes his children excessively hard on the practice court as a result.

However, his son Dom (Cedric Joe) would rather focus on his love of building video games.

While LeBron enjoyed playing his Nintendo Gameboy as a child, Dom has built an entire video game in his room called, “Dom Ball.”

The video game is like a video basketball game on steroids in which players gets extra points for style points and for “posterizing” opponents with spectacular slam dunks.

However, building a video game seems like child’s play to a serious LeBron.

He desperately wants his two sons to follow in his footsteps, and he knows exactly what it takes to get them there.

LeBron wants Dom to attend an upcoming basketball camp that will allow his son to go up against some top-notch competition on the hardwood.

However, Dom instead has his eyes on a video game camp in which he would learn more about his budding passion of building video games.

Despite LeBron’s disappointment in Dom’s passion, he still takes his youngest son to a meeting with Warner Bros. Pictures executives who pitch the Lakers star on a concept called, Warner 3000.

With Warner 3000, James would become the face of all of Warner’s film and television properties like “Game of Thrones.”

Think about it…LeBron of Thrones.

While LeBron is underwhelmed by the pitch from Warner Bros., Dom is intrigued by the possibilities and the technology that would be used to make his father a serious movie star.

More importantly, Dom is frustrated that his father does not encourage him to be himself and does not take his passion of video games seriously.

Another person that hates that LeBron does not take the world of technology seriously is Al-G Rhythm (Don Cheadle), the creator of the Warner Bros. pitch to LeBron.

Al-G gets so upset that LeBron dissed his idea, that he traps Dom and LeBron into the Server-sphere (or inside the computer) and creates a little wager if LeBron wants to return home to Earth.

LeBron would have to play a game of basketball against Dom and win to get his son and his normal life back.

The problem is they will be playing “Dom Ball” and not actual basketball.

And Lebron will have to play with the Tune Squad which consists of characters like Bugs Bunny and Daffy Duck.

On the other hand, Dom will play with the Goon Squad with players like Damian Lillard, Anthony Davis, Diana Taurasi and Klay Thompson.

While “Space Jam: A New Legacy” has its cheesy moments and an average storyline, the film has a great message that all parents and children need to hear.

In life, one must be themselves.

No person can truly be great while imitating others.

One must find their own lane in life and run their own race.

So the film is about a new legacy in more ways than one.

The film adds to the legacy of the original.

And although many parents want their children to continue their legacy, life is about finding one’s own purpose and fulfilling the legacy they have for themselves.

Life is not about living up to someone else’s expectations or legacy.