Movie Review: Solid Swan Song for Craig in ‘No Time to Die,’ But Repetitive Plot 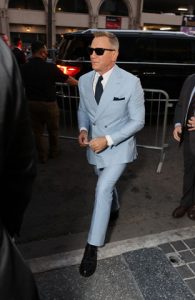 Name some of the great swan songs of all time.

Pittsburgh Steelers running back Jerome Bettis won the Super Bowl in his final NFL game in his hometown of Detroit.

Like Michael Corleone in “The Godfather: Part III,” just when Bond (Craig, “Knives Out”) thought he had gotten out of his old life unscathed, his haters pull him back in in “No Time to Die.”

In the movie “No Time to Die,” Bond has retired as a MI6 intelligence officer and is enjoying his tranquil retirement in Jamaica.

Bond has a woman on his arms, Madeleine Swan (Lea Seydoux, “Spectre”).

Furthermore, Bond does not have to worry about looking over his back like he did when he worked for the intelligence agency.

Bond has removed himself from that life so deeply that the agency gives his 007 tag to a new intelligence officer.

But despite leaving his past behind, he cannot escape the pain he feels after losing the love of his life, Vesper Lynd.

Bond simply cannot shake the memory of Vesper despite all his best efforts to let go.

Although Bond has vowed to leave the MI6 behind, when he gets a visit from his friend from the CIA Felix Leiter (Jeffrey Wright, “The Inevitable Defeat of Mister & Pete”) and learns about a new threat to the entire planet, he reluctantly comes out of retirement to stop a madman from destroying all mankind with his devilish schemes.

In “No Time to Die,” Lyutsifer Safin (Rami Malek, “Bohemian Rhapsody”) has developed a DNA targeting biological weapon that could possibly threaten the entire population.

While that plot is definitely timely and unfortunately realistic in today’s world of terrorist attacks, the premise has gotten overused in Hollywood in recent years.

Furthermore, the plotline in “No Time to Die” becomes a little too convoluted.

According to Justin Chang of NPR, “The plot is too busy and complicated to summarize at length: Let’s just say it involves a deadly plague of DNA-targeting nanobots that could wipe out millions of people worldwide, which feels just close enough to our real-life pandemic to suggest why the studio might have opted to hold the picture back last year.

“That said, nothing about ‘No Time to Die’ feels especially timely or urgent. It’s the usual assembly of Bond movie cliches, which is nothing to complain about, of course, since cliches—the gadgets, the one-liners, the martinis, the sex—are the lifeblood of this series.”

However, “No Time to Die” does have dope action scenes, sophistication, elegance as well as a lot of heart thanks to surprise developments late in the picture.

In “No Time to Die,” the cars are fly as to be expected.

The action scenes are fire as to be expected.

And Craig is the epitome of style and grace as to be expected.

Furthermore, as to be expected from any action movie, “No Time to Die” has a contemptible antagonist that people will hate just as much as they love Bond.

But no one, not even Academy Award winner Malek, can take away the spotlight too long from Craig.

Chang of NPR wrote, “Craig has been a terrific James Bond, maybe even the best, and his departure certainly deserves a little fanfare. But I admired the impulse behind this very long goodbye without feeling as moved as I wanted to be. There’s something a little too strained and self-conscious about the tragic emotional arc the filmmakers have saddled Bond with over the past several movies, and it feels like more than the character can withstand. Will Bond ever be allowed to be Bond again, a dashing rogue leaping deftly from caper to caper? Not this time—but maybe the next.”

Despite the faults of “No Time to Die,” no one can say anything negative about the performances, not just those from Craig and Malek.

Wright shines in “No Time to Die” like he does in any and every picture he stars in.

Another standout performance is given by Lashana Lynch (“Captain Marvel”), who plays Nomi, the new 007.

Nomi and Bond have a chemistry that almost gets explored in “No Time to Die.”

But like in any spy movie, people are not always what they pretend to be.

Fortunately, Craig as Bond is who moviegoers thought he was, a slick and smooth movie star who knows how to carry a movie, even one that is extremely long and formulaic.

Furthermore, Craig knows how and when to leave a franchise that made his superstardom reach astronomical heights.

“No Time to Die” is not the perfect swan song like Bettis’ Super Bowl victory.

But it is still victorious because of the performances and the action.