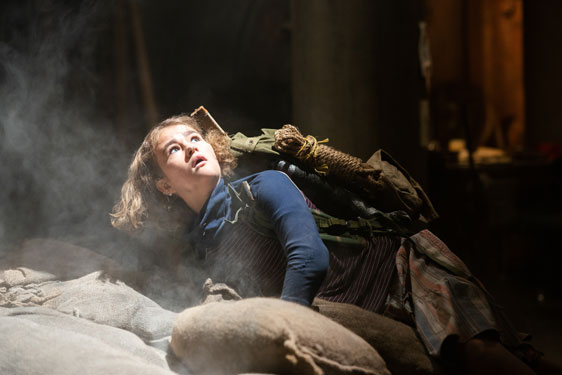 Hands down, “A Quiet Place” ranks as my favorite horror film of all time.

Unlike the status quo in Hollywood, “A Quiet Place” did not feature supposed horror scenes that came across as more comical than horrifying.

And unlike the Hollywood horror film formula, “A Quiet Place” did not include the requisite creepy doll.

However, “A Quiet Place” contained all the supernatural suspense that would terrify even the toughest of people.

In the process, the original “A Quiet Place” set itself up to become the next great horror franchise for a genre that needed some new blood.

But “A Quiet Place Part II” is not the type of sequel that one can walk into without seeing the original.

Moviegoers will have to see the original to see what happened to all the Abbott children.

Those who watch “A Quiet Place Part II” will have to watch the original to understand certain unspoken homages to the original like the nail on the staircase and the spaceship in the convenient store/pharmacy.

People who watch “A Quiet Place Part II” will have to understand how stressful and dangerous it was for the family matriarch Evelyn to give birth considering the circumstances she found herself in during “A Quiet Place.”

Therefore, let’s refresh the memory of those who have seen the original, and give some much-needed information to those who have not seen the best horror film of all time.

In 2018, RegalMag.com reported, “In ‘A Quiet Place,’ Earth has come under attack by blind creatures that attack, kill and destroy when they detect significant sound.

“Humans have to learn to sign in order to communicate, walk without shoes and listen to entertainment like music via headphones.

“Matters only get worse when families consist of little children.

“Kids want to play, yell, scream and enjoy the days of their youth, not sit in silence in fear of attack from monsters.

“The Abbott family in ‘A Quiet Place’ is initially a party of five.

“Regan (Millicent Simmonds) is the oldest Abbott child and suffers from a hearing disability.

“Lee is so devoted to helping his daughter navigate the world that he tries desperately to create a hearing aid for Regan that will give her some peak into the world that most people get to enjoy.

“Marcus (Noah Jupe) is the middle child in the Abbott clan.

“‘A Quiet Place’ begins with the Abbott family raiding an abandoned convenient store/pharmacy to find medicine to heal an ill Marcus.

“The family finds some medicine for Marcus, but the baby of the family, Beau (Cade Woodward) also finds a battery-operated spaceship at the store.

“Through sign language, Lee informs Beau that he cannot have the toy spaceship because of the danger that the noise will create.

“Despite his warnings, Regan sneakily gives Beau the toy anyway.

“But when the toy begins making noise as the family makes its way home, the monsters move in and attack and kill Beau, severing the family bond in the process.”

While the role of protector obviously fell on Lee in the original, that protector and family superhero in “A Quiet Place Part II” becomes the strong and determined, Regan.

In “A Quiet Place Part II,” the Abbott clan, minus a couple of members, finds itself in a similar predicament, with Evelyn trying to raise her children in a land in which people must be totally quiet to escape the wrath of the blind alien monsters who seize at noise.

And while “A Quiet Place Part II” does not supplant its predecessor as my favorite horror film, it adds to the franchise and will help continue the brand for years to come.

But there must be a way for human beings to escape the wrath of the monsters in “A Quiet Place Part II” without making a sound to provoke the creatures.

It is young Regan who figures out a signal that other humans consistently send out that will lead them away from potential monster attacks and to safety.

Furthermore, it is young Regan who figures out the kryptonite of the creatures.

If the creatures run across their kryptonite, they should face inevitable defeat, shouldn’t they

Regardless, Regan’s discovery might prove the best way to escape to safety even if the plan is not 100 percent safe.

However, in “A Quiet Place Part II,” Regan is not the only Abbott child that steps up and takes a leadership role in protecting and saving the family.

As a result of a gruesome injury in “A Quiet Place Part II,” Marcus must go from helpless to helpful if the Abbott clan is to stay hopeful as far as surviving the monsters is concerned.

While protecting his baby brother, Marcus must tend to his injuries while Evelyn makes the trip to find equipment that will keep her kids stay alive in their new hiding spot.

To put it bluntly, “A Quiet Place Part II” is not as horrifying as the original.

“A Quiet Place Part II” is much more subdued than its predecessor.

However, that is no diss.

“A Quiet Place Part II” shines because if the heroic performance of Simmonds.

And while Krasinski’s presence is missed for almost the duration of “A Quiet Place Part II,” Cillian Murphy provides that much-needed paternal energy with his character, Emmett.