Movie Review: ‘Shang-Chi and the Legend of the Ten Rings’ Might Become Cultural Phenomenon Like ‘Black Panther’ 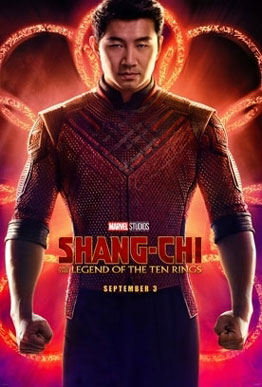 When “Black Panther” dropped in 2018 it created a phenomenon that reverberated throughout Black America.

At movie theaters across the country, children dressed up like T’Challa and adults donned African garb and daishikis to celebrate the first true superhero movie with a predominantly Black cast, set in the fictional African country of Wakanda.

When haters questioned why Black America went to such great lengths to celebrate the release of a superhero movie, many responded with the fact that for Black kids seeing someone that looked like them on the big screen as a superhero made a super impact on their self-esteem.

For many of their parents, the only time they saw a Black face on the big screen during their childhood, for the most part, was when Black people played a stereotypical character like a gangster, thug or drug dealer.

Over the last year or two, it seems that the only story the mainstream wanted to cover about Asia was the fact that the COVID-19 pandemic originated in China.

As a result, many bigots took it upon themselves to get some payback by assaulting their Asian brothers and sisters for no reason, other than the fact that a virus they had no control over originated on the continent of their ancestors.

Almost immediately, Asian Americans began to fight back and speak up for their community and Hollywood followed with movies featuring Asian movie stars like “Boogie” and “The Protégé.”

But none of those previous movies contain the beauty and elegance of Asian culture like “Shang-Chi and the Legend of the Ten Rings.”

Combine that with the fact that Shang-Chi (Simu Liu) is a certified Asian superhero in a Marvel film and audiences will get a movie that resonates culturally with Asian Americans in the same way that “Black Panther” resonated with Black America.

“Shang-Chi and the Legend of Ten Rings” focuses, obviously, on the legend of the 10 rings.

With those 10 rings, the possessor of it has the power of the gods.

Having such power gives the possessor the opportunity to use their strength to unite the world or abuse it to cause destruction to the world, while accumulating more worldly power.

Unfortunately, the possessor of the 10 rings Wenwu (Tony Chiu-Wai Leung) uses his power for evil conquering many lands and subjugating many groups of people.

Thanks to the 10 rings, Wenwu has all the strength that one man can need in life.

However, when Wenwu hears about a land called Ta Lo in which the inhabitants have martial arts skills given to them directly from the gods, he desires to go there to benefit from their power.

But instead of gaining more power when he gets to Ta Lo, he falls in love and gains a wife Jiang Li (Fala Chen), a son Shang-Chi and a daughter, Xialing (Meng’er Zhang).

But the marriage of Wenwu and Jiang Li is not met with open arms by the people of Ta Lo.

As a result, Jiang Li gives up her martial arts powers to raise her family.

Nevertheless, Wenwu and Jiang Li do not neglect teaching their children how to defend themselves via martial arts.

But after tragedy in their native land, Shang-Chi moves to California to escape danger and create a normal life for himself.

Shang-Chi befriends Katy (Awkwafina, “Jumanji: The Next Level”) in high school and the two share a 10-year platonic friendship, although Katy’s grandmother constantly nags Shang-Chi about marrying her granddaughter.

The two even work together as valets at a local California establishment in which they immaturely take luxury vehicles for joy rides.

In “Shang-Chi and the Legend of the Ten Rings,” Katy believes her friend is meek and helpless because she once had to defend him from a fight in high school.

However, when Shang-Chi beats up a bunch of thugs led by Razor Fist (Florian Munteanu, “Creed II”), a man with a machete for an arm, Katy realizes there is more than meets the eye when it comes to her “timid” friend.

And when Katy and Shang-Chi travel back to their homeland, even Shang-Chi finds out that there is more to his family than he ever knew as well.

“Shang-Chi and the Legend of the Ten Rings,” initially comes across more like a typical action movie than a superhero movie.

But throughout “Shang-Chi and the Legend of the Ten Rings,” moviegoers will see that Marvel has big plans for the titular character.

Although Liu’s Shang-Chi character has the potential to become a superhero, he downplays his powers in a way that makes him relatable to the average guy.

Like a true tough guy, Shang-Chi does not become violent until he must defend himself and others.

Awkwafina brings her usual comedy to “Shang-Chi and the Legend of the Ten Rings.”

She is that one friend from high school or college that still acts the same way 10 years after graduation even though all her friends have matured and moved on from their childish ways.

“Shang-Chi and the Legend of the Rings” can rival any action movie or superhero movie.

But the cultural impact that “Shang-Chi and the Legend of the Ten Rings” might have on the Asian community might trump everything cinematically.

When “Black Panther” dropped, it changed the Black community and made a huge dent at the box office, proving the profitability of Black superhero movies.

Maybe “Shang-Chi and the Legend of the Ten Rings” can do the same thing for the Asian American community in a year in which movies with Asian-leads have thrived at the box office.

“Shang-Chi and the Legend of the Ten Rings” hits theaters on Sept. 3.