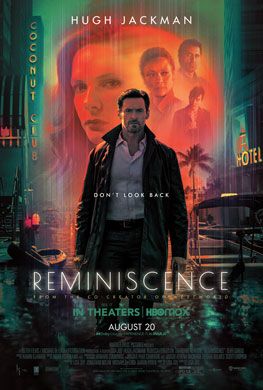 If possible, wouldn’t you want to go back into time to the good ole days?

You know, the days of your childhood when you did not have a care in the world.

What if you could back to the day you first met your significant other?

What if you could go back to the time before your loved-ones departed this Earth?

Many would gladly go back, especially if their current situation is far worse than their former years.

Well, in “Reminiscence” starring Hugh Jackman (“Free Guy”) and Thandiwe Newton (“Solo: A Star Wars Story”), going back to the good ole days might lead to unintended consequences because the good times for some might be the worst of times for others.

And the collision course that might result from rehashing the past might become catastrophic for all involved.

In “Reminiscence,” the rising waters and a recent war makes the United States unrecognizable.

Cities like Miami and New Orleans have very few drylands because of erosion, therefore limiting the places where people can reside.

And unfortunately, the wealthy have scooped up all the drylands and secluded themselves away from the realities of the common folks.

Most of the wealthy residents like Walter Sylvan (Brett Cullen, “Joker”) have also bought up all the dwellings used to house the commoners and have turned into slumlords not caring at all about those less fortunate.

Many of the adults (male and female) had to fight in the recent war.

And some even lost body parts.

Therefore, to relive the glory days of the past before the war and before the drylands washed away to sea, many hire Nick Bannister (Jackman) and his assistant (Newton) for their reminiscence practice.

Through reminiscence, a person not only reminisces about the past, but is transported back to that time and place as if they are truly reliving it.

The practice of reminiscence is also used by law enforcement when they depose witnesses to a crime.

It is hard to lie about something in the past while under the trance of reminiscence.

Nick has regular clients who come in to relive their past, although many cannot even pay.

But Nick has a soft spot for those who have been dealt a hard blow in life, especially some of his fellow veterans from the war like Hank (Javier Molina).

Nick also has a soft spot for a customer named Elsa Carine (Angela Sarafyan) who comes into relive a lost romance with the love of her life.

Unfortunately, Nick’s soft spot causes him to fall for a beautiful woman named Mae (Rebecca Ferguson, “Mission Impossible – Fallout”) who comes in after hours to undergo reminiscence to find her lost keys.

While many people would just retrace their steps to find their lost keys or simply call a locksmith, Mae strangely wants to undergo reminiscence under the guidance of Nick to find the misplaced item.

While Nick has a soft spot for many of his customers, he has an infatuation with the mysterious, Mae.

Almost immediately, Nick forgets the importance of his business.

He begins spending days with Mae at her home.

He begins spending nights watching her perform as a cabaret singer.

He even begins to believe that he is in love with Mae.

Then, Mae disappears into thin air.

While others urge Nick to forget about Mae and move on, he simply cannot.

When people tell Nick that Mae is not the person he thinks she is, he does not believe them.

He even gets offended by those slandering Mae’s name.

Nick’s obsession with Mae begins to affect his professionalism when it comes to clients of his reminiscence service.

However, when he sees Mae in one of his client’s reminiscences, it sends Nick over the edge as he tries to put the pieces of his lost romance back together, while coming to grips with the fact that he might have never really known the real Mae in the first place.

Nick’s obsession with finding Mae again makes him question everything and everybody, while his business suffers because of that obsession.

And it also begs the question, can someone’s past make you question your future with them?

“Reminiscence” will remind moviegoers of “Inception,” a 2010 movie starring Leonardo DiCaprio and Tom Hardy in which a thief uses dream-sharing technology to steal corporate secrets.

Although the movie is dreary, some of the shots are spectacular.

The opening aerial shot of “Reminiscence” where the camera captures the skyline of Miami is breathtaking.

Furthermore, the fact that downtown Miami is inundated with water, permanently, is a sight to behold.

Performance wise, Jackman and Newton are both impressive in “Reminiscence.”

Jackman goes from meek and loving to ferocious and volatile because of his interaction with Mae and those that knew her from her past.

Newton and Jackman’s characters are microcosms of the entire film.

One person is running away from their memories.

On the other hand, the other person is trying to recapture their memories.

Regardless, both are letting their pasts control their present and their future.

And in that regard, good memories and bad memories can both lead to bad results if not confronted.

While “Reminiscence” is unique and a breath of fresh air, it is also very different.

That uniqueness might turn some moviegoers off, while making others watch it more than once to capture all the nuances and messages in the film.