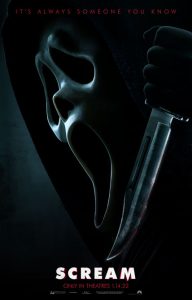 A person or franchise truly reaches iconic status when they start creating words or slang.

Now a quarter century after the first “Scream” movie, the popular franchise that many horror film fans grew up on has created the term requel (not sequel or prequel) to describe the 2022 version of “Scream.”

Variety reported, “The new movie is a requel, a term the film dutifully explains—it means a franchise extension that’s poised, on a kitchen knife blade, between the past and the present, between something jumpy and new and a respect for the legacy characters that gave the original its soul.”

In the 2022 version of “Scream,” Tara Carpenter (Jenna Ortega) exemplifies the typical teenager.

Tara is intelligent, but sometimes obnoxious with it.

She is on the brink of independence, but still lives under the supervision of a parent or guardian.

Tara has her set group of close friends that includes Amber, Wes (Dylan Minnette), Mindy (Jasmin Savoy Brown), Liv (Sonia Ammar) and Chad (Mason Gooding, the son of Academy Award winner, Cuba Gooding, Jr.), and she has interests and hobbies outside of school like an interest in more intellectual horror films like those of the Jordan Peele variety.

But like many children of this new generation, Tara cannot fully embrace the innocence of her childhood because the technology that exists in 2022 makes it easier for evil people to get close to innocent people and wreak havoc.

While texting her close friend Amber (Mikey Madison), Tara receives a phone call on her landline that comes up on the caller ID as an unknown caller.

Although she initially does not answer the phone call, she continues to get a call from an unknown caller and is prompted to entertain the caller when she receives a text from Amber’s number urging her to answer the phone.

The mysterious caller tells her that he has cloned Amber’s phone and he wants to play a horror movie trivia game with Tara.

He will ask Tara several questions.

But if she does not answer them correctly, all you know what might break loose.

Luckily, Tara’s sister Sam Carpenter (Melissa Barrera, “In the Heights”) comes to her rescue when she needs it most.

But Sam being there to ease Tara’s pain does not negate the fact that the small town of Woodsboro once again finds itself grappling with its violent past.

Like “Coming 2 America,” the new version of “Scream” asks and answers many of the questions that movie lovers ask amongst themselves.

Why does Hollywood create so many sequels, prequels, remakes and reboots, especially since very few people have even asked for them in the first place?

While “Coming 2 America” briefly mentions sequels that nobody asked for, “Scream” explains how Hollywood should approach reboots and rebrands.

Therefore, movie companies must try to incorporate legacy characters or some of the original characters that fans of the franchise fell in love with in the first place.

Then, after the movie brings in some of the legacy characters, it must bring in characters that have some relation or connection with those legacy characters (preferably younger characters) who can appeal to a new audience without alienating the fans that made the franchise hot to begin with.

“Scream” 2022 achieves its mission effectively because fans will turn out mostly to see those legacy characters that they have enjoyed watching on the big screen since 1996.

As a result of the new characters in “Scream,” the younger generation who were not even alive in 1996, might have a version of the “Scream” franchise all their own without losing the longtime fans.

That is the genius of “Scream” creating the requel, and not putting out a prequel or 100 percent sequel.

Unfortunately, some elements of “Scream” come across as predictable.

Per the previous “Scream” films, this “Scream” classifies as a whodunit in addition to a scary movie.

However, “Scream” 2022 does not scare enough to match the horror of the first films.

Fortunately, that does not stop “Scream” from being enjoyable and giving hope for the future of the franchise.

With the influx of new talent and charisma, “Scream” has the potential to regain its horror roots, while maintaining its whodunit qualities.

But what the new “Scream” truly achieves it pop culture icon status (if it had not attained that status beforehand) because only when a person or brand introduces new words to the lexicon can it be qualified as legendary.