Movie Review: ‘Plane’ an Adrenaline-Rushed Story About Will to Survive 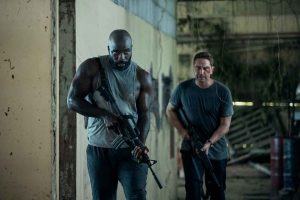 When looking at the title of the movie “Plane,” much is left to be desired.

Hollywood has released a plethora of movies about suspense in the sky, so forgive people if they do not get excited about “Plane” based on the title alone.

But “Plane,” starring Gerard Butler (“Angel Has Fallen”) and Mike Colter (“Luke Cage”) is much more than just an airplane flick.

The movie “Plane” is a pure adrenaline rush.

Furthermore, “Plane” is an intense story about the human will to survive despite hellish circumstances.

Actually, “Plane” is a suspenseful airplane movie that becomes an action thriller.

And unfortunately, “Plane” will hit even harder this week considering the FAA power outage that temporarily grounded flights on Jan. 11.

Be honest, no matter how often you have flown in an airplane, you get a little anxious every time you board.

Although you have heard the statistics about how much safer flying is over driving, there is something uneasy about crashing when you are tens of thousands of feet in the air.

A crash on the ground is something less intimidating.

But being in the air and crashing is another beast entirely.

How much more nervous would you be if you boarded an international flight and a man accused of murder is also on the airplane in handcuffs being extradited to face a judge and jury for his alleged crime?

Well, regardless of how nervous you might be, the Trailblazer flight to Japan must take off if the passengers and crew are to get to their destination in time for New Year’s Eve celebrations.

Although airline captain Brodie Torrance (Butler) wants his superiors to re-route the airplane to avoid some rough weather that is ahead, the Trailblazer airline team is more worried about saving time than saving some frayed nerves that are sure to come because of the rough weather.

Regardless of Brodie’s instinct about the plan, what can a person do when their superiors overrule their suggestion?

The subordinate must follow the directions of their boss.

Unfortunately for the passengers on “Plane,” the weather causes the electronics and the computer system of the airplane to malfunction.

So instead of having aviation experts to help him guide the airplane to its destination and a tank filled with fuel, Brodie and his co-pilot Dele (Yoson An) must keep the airplane in the sky for as long as possible on a battery and then find somewhere safe to land without causing an explosion with the fuel they have remaining in the tank.

Yeah, that storyline might not be that different than other airplane thrillers that have graced the big screen.

But what if once the airplane lands, the crew and passengers find an even bigger obstacle to overcome if they are to ever make it home safely?

And then to make things even more complicated, what do you do when an airplane crashes and one of the survivors is a man handcuffed who was on his way to a murder trial?

Initially, “Plane” begins on a positive note because of the old school sound and feel of the film opening.

Any movie that harkens back to a 1980s or 1990s feel is probably already headed towards greatness.

Apples to oranges because it is a sequel to a classic 1980s movie, but “Top Gun: Maverick” began with a similar old school vibe.

But “Plane” is not just dope because of the music.

The characters in “Plane” are very multidimensional and complex like human beings often are.

Even though Louis Gaspare (Colter) is being extradited in handcuffs for an alleged murder, he is not just a scary monster that needs to be caged.

Although Gaspare is big in stature, does not say much and speaks in an intimidating tone when he checks other passengers for taking selfies with him in the background, there is much more to his story than meets the eye.

Even Brodie has more to his personality than can be seen on the surface.

As a pilot, he has a great sense of humor when dealing with the passengers.

But when the airplane deals with the bad weather, the passengers begin to acknowledge his humor in a sarcastic manner.

In “Plane,” the passengers doubt whether his piloting skills are as good as his comedic skills.

Regardless of how the passengers feel about Brodie and his piloting skills, they must band together if they are to fully survive this harrowing ordeal.

But after the adversaries in “Plane” show up, it is clear that this is no laughing matter like on “Gilligan’s Island.”

Richet does an excellent job with the action scenes in “Plane.”

And the acting by some of the lesser-known names like An and Daniella Pineda, who plays the flight attendant Bonnie, holds its own against a star like Butler.

Additionally, “Plane” gives Colter an opportunity to play a bad guy after his superhero turn in Netflix’s “Luke Cage.”

Furthermore, “Scandal” fans will love “Plane” because they will get to see the star of that show Tony Goldwyn (“Ghost”) back on the big screen.

Simply put, “Plane” contains a little bit of everything that is desired for a successful, action-packed film to kick off a new year!