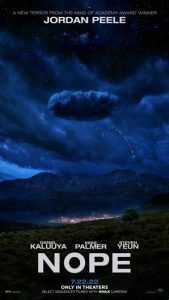 Horrors movies are a predicament and a conundrum in and of itself.

If some otherworldly being or entity descended on most people’s lives, they would get the heck out of dodge with the quickness.

But as Marlon Wayans once told RegalMag.com, if that happened there would not be a movie.

As a result, O.J. (Daniel Kaluuya, “Judas and the Black Messiah”) and his sister Emerald (Keke Palmer) must stay on their family ranch as some flying saucer or U.T.F.O. wreaks havoc on them, their neighbors and their four-legged friends, which produces one of the weirdest films of all time, for better or worse.

Otis, Sr. (Keith David, “Greenleaf”) and his children have definitely achieved the American dream in “Nope.”

The family owns a ranch with acres as far as the eye can see.

In “Nope,” Otis and his family train horses.

Their horse-training business has even attracted Hollywood as television and film production companies seek out their experience when filming commercials, television shows and movies.

Although Black people have an extensive history with farming and rodeos (i.e., Bill Pickett), how can one not see the humor in Black cowboys running an entire section of Hollywood, an industry that is still White dominated?

But when some White women hear the name O.J., it gives them pause because they undoubtedly connect that name to former football star and acquitted killer, Orenthal James Simpson.

Despite the success of the ranch and the Hollywood business that derives from it, real life still hits Otis’ family when they least expect it.

In “Nope,” the two Otises are discussing an upcoming Hollywood gig, when a dust up occurs on the ranch.

Suddenly, debris falls from the sky, striking Otis, Sr. and the horse that he is riding on.

A piece of debris hits Otis, Sr. in the eye.

And although O.J. attempts to rush his father to the hospital, Otis, Sr. succumbs to his injuries.

The preliminary reports are debris fell from an airplane and unfortunately, something fatal hit the family patriarch.

Because of the bad luck that befalls Otis, Sr., bad luck hits the family financially too.

In “Nope,” O.J. is forced to sell off 10 of the family’s horses to a nearby theme park, although he hopes to get back on his feet soon and buy the horses back from the amusement park.

But as soon as O.J., and his sister Emerald, try to get back on track after grieving the tragic and surprising demise of their patriarch, all kind of you know what breaks loose.

But instead of getting the heck out of dodge like stereotypical Black folks, characters in the Jordan Peele-directed “Nope,” break all stereotypes and barriers by staying on the seemingly God-forsaken ranch and discovering what evil is lurking over their beloved estate.

The dust ups that led to Otis, Sr.’s death does not stop once the old man goes to sleep.

Periodically, the dust ups occur and the remaining horses on the ranch go bonkers, making noises that horses usually do not make and taking off from their enclosures to God knows where.

In “Nope,” O.J. even notices that one cloud hovering over the family ranch does not move like the other clouds.

It just stays in place day after day and hour after hour.

Furthermore, the flying saucer shaped movement makes him believe that some type of extraterrestrial life has taken over their region.

However, with no visual proof how can he plead his case to the town locals let alone defeat the alien visitor?

In “Nope,” Emerald and O.J. try to hook up some high-tech surveillance cameras with the help of Angel (Brandon Perea) from Fry’s Electronics.

However, something strange happens to their electricity when the alien visitor begins wreaking havoc.

Although O.J. and Emerald are not filmmakers, working in the industry as animal trainers has exposed them to some of the best filmmakers and cinematographers in the business.

If the brother and sister can convince a great cinematographer to film the happenings on their ranch, they could possibly prove alien life and get the Oprah Winfrey talk show treatment, leading to instant fame and celebrity.

“Nope” is vastly different than “Us” and definitely “Get Out,” which contained a lot of social commentary.

And although Peele’s movies have the well-deserved description of eccentric, “Nope” might be the most eccentric of the bunch.

Unfortunately, it gets off to too much of a slow pace.

The movie takes place in the country, which is stereotypically slower paced than urban areas.

So, in a way, the slow pace makes sense thematically because of the setting of “Nope.”

Furthermore, Kaluuya plays a role unlike any other in his impressive filmography.

In “Nope,” O.J. epitomizes the term country bumpkin, with the sometimes-inaudible speech and slow drawl.

However, O.J. has an intensity in his eyes that shows he is not the stereotypical naïve and trusting country boy.

Emerald is that one family member or friend that you cannot do business with because they will say all the wrong things when they should be professional.

In ‘Nope,” Emerald is the type of person to promote her side hustles during a presentation for another business.

And Angel is that person that you barely know.

Still, he gets so comfortable from the get-go like he thinks he is family or a close friend.

The relatable characters and the sheer fear factor make “Nope” a yep.

The only “wack” or too weird thing about “Nope” is how a horse’s name or character’s name introduces new scenes of the film.

But other than that one nope, “Nope” definitely is a yep, as in yep, go check it out!