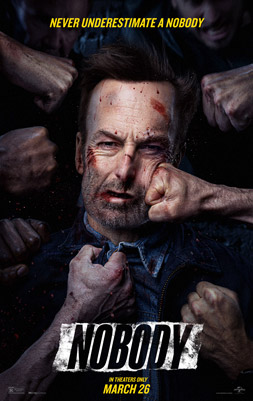 Don’t Push Me Cause I’m Close to the Edge

The lyrics of the classic song “Don’t Let Me Be Misunderstood” read, “Well if I get edgy, I want you to know I never mean to take it out on you. Life has its problems; I get more than my share. But there’s one thing that I would never do. Oh, I’m just a soul whose intentions are good. Oh Lord, please don’t let me be misunderstood.”

While Hollywood has overused “Don’t Let Me Be Misunderstood” in movies, television shows and more, never have the lyrics seemed more appropriate than in the crime/action film, “Nobody.”

In “Nobody,” Hutch’s frustrations with life can get summed up better in another classic song, “The Message” by Grandmaster Flash and the Furious Five.

For all of the haters who think that Hutch is a coward in “Nobody,” they should look up Melle Mel’s classic chorus in “The Message.”

In the 1982 hip-hop classic, Melle Mel of Grandmaster Flash and the Furious Five rapped, “Don’t push me cause I’m close to the edge. I’m trying not to lose my head.”

Unfortunately, for the haters in “Nobody,” they find out the hard way what happens when Hutch finally loses his head.

In “Nobody,” Hutch Mansell (Bob Odenkirk, “Better Call Saul”) is just living in a jungle as he tries to keep from going under.

On the outside looking in, he has all of the things that a man should want.

He has a decent nine to five.

Hutch actually has plans to purchase the company he works for from his father-in-law, Eddie Williams (Michael Ironside).

The family lives in a nice middle class, suburban neighborhood.

What more can anyone ask for?

Hutch is the embodiment of the American dream, supposedly.

But as many people can attest, the monotony of life can drain a person and even bore them to death.

Every Monday through Friday, Hutch’s routine is so predictable it is like clockwork.

He goes to work on the city bus.

Every Tuesday, he seems to forget that his trash gets picked up that day, and he always is a few seconds too late.

The simple question should be why doesn’t Hutch just put the trash out on Monday evening like normal people?

But Hutch is not a normal person, no matter how hard he pretends to be one.

Hutch has something in his past that he is hiding from his family, co-workers and acquaintances.

In “Nobody,” people even ask Hutch, who the F are you?

On the outside, he seems a little meek.

But even if he is meek, that does not mean that Hutch is actually weak even though to his son and brother-in-law Charlie Williams (Billy MacLellan) he fits the definition of weakness.

When a tag team of home invaders breaks into Hutch’s home one night, he has a chance to defend his family even though at one point Hutch is staring down the barrel of a pistol.

After one of the burglars lets their guard down, Hutch has a chance to attack the robber with a golf club.

Furthermore, his son has wrestled one of the robbers down to the ground and has them in a headlock.

Nevertheless, Hutch decides not to hit one of the robbers in the head with the golf club.

Additionally, Hutch forces his son to let the other robber go.

The fact that Hutch turned the other cheek and let the robbers make it without inflicting physical harm makes him the butt of jokes from neighbors to police officers to his brother-in-law and even to his son.

In “Nobody,” Hutch does not even seem to mind that the burglars stole a wristwatch from him that has sentimental value.

But when Hutch realizes that the robbers might have stolen his little daughter’s kitty cat bracelet, all Hell breaks loose and the innocent façade begins to shatter.

A wise person once said that Hell has no fury like a woman scorn.

Well, that should get revised because Hell has no fury like when Hutch is scorned.

But in “Nobody,” Hutch learns that if you scorn the wrong people like Russian mobsters, the mobsters’ fury might put Hutch’s entire family in peril.

Flat out, Odenkirk carries “Nobody.”

Hutch is the most unlikely hero or anti-hero.

He is the most unlikely gangster.

And he is the most unlikely bada$$.

But Hutch does not just kick behind and take names.

He does it in such a comical and unorthodox way that it makes “Nobody” like no other action thriller.

Even the Russian gangsters are unorthodox and unusual in “Nobody.”

When one stereotypes Russian mobsters, karaoke singing probably does not pop into the minds of many gangster film fans.

However in “Nobody,” Yulian (Alexey Serebryakov) can cut someone with a makeshift knife and make people cut a rug to his singing.

The most unorthodox character in “Nobody” is probably Harry Mansell, played by rapper/actor RZA from the Wu-Tang Clan.

RZA plays Harry in a Charlie from “Charlie’s Angels” type of way that kind of fits his quirky personality in real life.

Although some of the scenes come across a little corny, the real reason that everybody will like “Nobody” is that everybody can relate to having someone misunderstand them or someone pushing them close to the edge, and just trying not to lose their head.

When a person explodes, it does not mean that their intentions were not good.