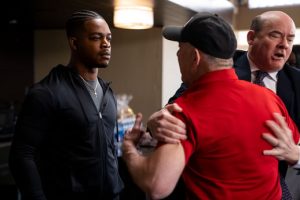 Heading in to see the new sports movie “National Champions,” it might be natural for some movie lovers to think that the film will be another generic sports movie with bad game scenes and fake Knute Rockne locker room speeches.

However, “National Champions” represents so much more for the current state of collegiate elections.

Because of the timeliness of the story and the much-needed discussion, “National Champions” is much heavier than other sports films.

Furthermore, it might open up pandora’s box when it comes to the slave-like system that allows the NCAA, colleges and corporations to make billions off the backs of college kids, while the athletes basically work full-time jobs for free.

In real life, many sports fans have begun to predict the outcome of the upcoming college football playoffs, which features three blueblood programs and one upstart college team that many did not think would still be in the mix this late in the season.

On New Year’s Eve, the two semifinal college football games will feature University of Georgia vs. University of Michigan in one match up.

Hotels rooms have been reserved for those games.

Flights have been booked.

Corporations have purchased their commercial spots.

Sponsors have begun to create signage that will adorn the various football stadiums.

Coaches have begun game planning for their opponents.

And fans have begun talking trash to their upcoming opponents’ fans.

Then the semifinal games will commence, and the winners will meet for the national championship game on Jan. 10.

The winner of that game will go down in history.

The school will host a parade.

President Joe Biden will invite the winners to the White House.

Seniors and juniors will see their dreams come true of getting drafted by an NFL club.

Then, the coaches, remaining players and new recruits will begin the process again, trying to win next year’s college football championship.

Players will not get paid, per se, for participating in these billion dollar generating games.

However, they will receive gifts like suits, luggage, candy bars, etc.

The best college players will get some money for using their name, image and likeness to promote products.

But the role players probably will not get anything for their efforts.

Despite the pros and cons of that scenario, that is how the college football playoffs should play out in real life.

What would happen to the NCAA and its member institutions if the best players on the college football playoff teams decided to boycott the games to protest the current business model in college sports that allows companies and institutions to make billions, while the players get nothing?

What if enough players boycotted the game that it caused the national championship to get canceled, which would mean all that advertising and sponsorship money would disappear in the form of make goods?

Would the NCAA change its system?

Or would the protesting players get blackballed like the NFL did to former San Francisco 49ers quarterback Colin Kaepernick.

In “National Champions,” that is the dilemma facing star quarterback, LeMarcus James (Stephan James, “If Beale Street Could Talk”).

LeMarcus is not just a star quarterback.

He is the Heisman Trophy winner.

Scouts project the Miami Dolphins selecting him with the first overall pick in the NFL Draft.

Additionally, sports commentators have described him as the best quarterback prospect to come out of college since Patrick Mahomes left Texas Tech.

So to say LeMarcus has a lot to lose by staging a protest on the day of the national championship game represents the biggest understatement of the millennium.

In “National Champions,” LeMarcus could go down as a martyr in the history books.

Or he could go down as a person that blew the opportunity of a lifetime.

The opportunity that awaits him could change his life and his family for generations to come.

But like many leaders, LeMarcus cares more about the collective than his own coffers.

What about his best friend and teammate Emmett (Alexander Ludwig, “Heels”)?

Emmett has busted his behind for the Wolves football team for four years.

However, he does not have a future in the NFL.

Emmett comes from a trailer and a farm and will soon return to the farm penniless after his collegiate career ends.

What about all the money he generated for the Wolves and college football as a whole?

Does he get anything for his services?

Does he get medical insurance to help pay of all the debilitating injuries he sustained giving his all to his alma mater?

Or does he have to endure an adulthood of injuries, physical therapy and mounting medical bills?

Emmett is not a star.

He is a little guy in a billion-dollar business, the low man on the totem pole.

In “National Champions,” LeMarcus’ boycott is more for people like Emmett than it is for stars like him.

And LeMarcus’ played forcefully, yet with restraint, by James gives “National Champions” its passion and converts people to the players’ point-of-view and away from the greedy capitalists using them for straight profit.

But despite the seriousness of “National Champions,” the camaraderie between LeMarcus and Emmett is beautiful.

In “National Champions,” LeMarcus and Emmett definitely share a brotherhood as LeMarcus would put his future in jeopardy for the betterment of his brethren in college athletics.

Additionally, the believe in Christianity and love for cinema that LeMarcus and Emmett share makes them even more likable.

Unfortunately, the first few moments of “National Champions” drag and will make moviegoers falsely believe they are watching another generic sports movie.

But “National Champions” is more than a sports movie.

“National Champions” is a call to action for college athletes and possibly the impetus for more change.