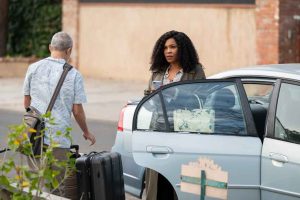 Real life can sometimes be more interesting than anything Hollywood can create.

The next thing people know, they might have spent hours on their couch pretending that they are police officers, lawyers or private investigators.

Therefore, taking a subject matter that would appear on ID, “Dateline” or “20/20” and turning it into a true cinematic experience is genius.

Couple the ID effect with a film shot like the HBO show “Rap Sh!t” in which social media posts and FaceTime are used as a primary perspective and moviegoers will get a true 21st century, edge of your seat suspense film that has more twists and turns than a top.

Parenting can become a roller coaster of emotions.

When “Missing” begins in 2008, Young June (Ava Lee) is the apple of her parents’ eyes, and they are the apples of her eyes.

However, when a toddler transitions eventually into a teenager, their parents are sometimes not the most popular people in their lives anymore.

Although teenagers like June (Storm Reid, “A Wrinkle in Time”) love their parentals, they often see them more as a nuisance than someone that is absolutely a necessity in their lives.

In “Missing,” June would much rather spend time with her friends like Veena (Megan Suri) than her aggravating but loving mother, Grace (Nia Long, “The Banker”).

Grace is constantly trying to impart wisdom to her 18-year-old daughter in “Missing.”

However, much of it goes in one ear and out the other because June spends much of her time texting, messaging or Face Timing friends.

In “Missing,” Grace has a hard time even leaving June a voicemail because her daughter’s voicemail is consistently filled to capacity.

Actually, it probably would not even matter if Grace could leave a voicemail because like most parents, she cannot even effectively use the technology that the younger generation has mastered with ease.

In “Missing,” June is trying to be respectful as possible as her mother prepares to go out of the country on vacation with her new boyfriend Kevin (Ken Leung).

But what Kevin really wants is June’s blessing because he wants to take his relationship with Grace to the next level.

However, June could care less because she is not looking for anyone’s blessings to throw this epic party she is planning once Kevin and Grace hit the road.

Although her mother does not want her to have company and has even enlisted Heather to be somewhat of a babysitter, telling a teenager not to do something is just like telling them to do it.

Therefore, the party commences along with the drunkenness, the junk left behind at the home and the predictable hangover.

Fortunately, June hears the most important thing that her mother tells her and that is when and where to pick her and Kevin up when they return home to Los Angeles.

But when June arrives at LAX with her cameras rolling and a funny sign to welcome Grace and Kevin back, neither one of her loved-one’s ever get off that airplane.

At that moment, the roles reverse, and June becomes the parent tracing Grace’s steps and trying like you-know-what to bring her mother home safely.

Fortunately, the technology that June has mastered might shed light on what happened to June and why she never returned to LAX.

Unfortunately, the technology that might shed light on the situation is time sensitive.

Additionally, the language barrier that exists between June and the people in the foreign country that Grace and Kevin visit might make it even harder for her to discern what is really going on.

But like June does throughout “Missing,” she leans on even more technology to fill in the gaps that even allude law enforcement officials like those in the FBI.

However, moviegoers please do not lean on your prejudices about Hollywood becoming formulaic and predictable when viewing “Missing.”

All those aforementioned adjectives are missing from “Missing” because the movie is the exact opposite of formulaic and predictable.

Twists and turns will come out of left field, and will not end until the closing credits, in “Missing.”

But “Missing” is not just suspenseful.

It is not missing much in the realm of believable performances.

Each actor in “Missing” does his or her thing and the realness that they display adds to the suspense of the movie because it is easy for moviegoers to imagine being in a similar position because these stories happen all too often.

No one truly knows their own circle.

How big is too big when it comes to your own circle?

How trustworthy is your family?

How trustworthy is your mate?

How trustworthy are your closest friends?

In “Missing,” everyone can be a suspect.

And at times everyone looks suspect making it virtually impossible for moviegoers to guess ahead of time what happened to Kevin and Grace.

But that unpredictability and the fact that people never really know the people in their circle is why “Missing” will resonate so much because it is so much like our realities.

Therefore, having a film version will no doubt draw fans in too.