Movie Review: Marvel Has Another One with ‘Eternals’ 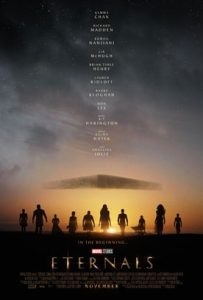 Hip-hop producer D.J. Khaled likes to say “another one” when he knows he has another summer anthem or instant hip-hop classic.

Well Marvel Studios should borrow Khaled’s catchphrase because Marvel Universe has another one when it comes to dope superhero movie franchises with “Eternals.”

And when push comes to shove, Marvel might have a franchise that becomes just as popular as the mighty, mighty Avengers.

Have you ever heard of an apex predator?

Merriam-Webster defines an apex predator as “a predator at the top of the food chain that is not preyed upon by any other animal.”

In “Eternals,” Sersi (Gemma Chan) attempts to teach her boyfriend Dane’s (Kit Harrington) students about apex predators, with some labeling animals like lions as apex predators, when a mysterious earthquake begins to rock the London classroom.

However, when Sersi, Dane and Sprite (Lia McHugh) finally begin to assess the situation, they realize that the tremors they felt did not come from an earthquake.

It came from a deviant, an ancient predator thought to have been made extinct centuries ago.

Therefore, on a public London street, as Dane watches in amazement, Sersi, Sprite and Ikaris (Richard Madden, “Rocketman”) fight to the death with the deviant, which looks like a mixture of a dinosaur and an unidentified flying object.

On the serious tip, Dane has always known there was something special about his girlfriend, Sersi.

When most girlfriends give their boyfriends power tools or video game systems as gifts, Sersi can find Dane an ancient family heirloom from generations in the past that must have cost her a fortune.

Honestly, Sersi is not like other women because she is not really a woman per se.

Sersi is not even human.

Neither is Sprite or Ikaris.

All three are eternals and have lived for thousands of years protecting human beings from the onslaught of the deviants with a little help from their comrades in the struggle like Thena (Angelina Jolie), Ajak (Salma Hayek), Kingo (Kumali Nanjiani), Phastos (Brian Tyree Henry), Makkari (Lauren Ridloff), Druig (Barry Keoghan) and Gilgamesh (Don Lee).

The eternals are under the rule of Arishmen, a god-like being that controls the missions of the eternals through his second-in-command, Ajak.

Throughout history, the deviants have come to Earth to destroy human beings.

But it is up to Ajak and her eternals to fend off these deviants to allow human beings to continue to grow and evolve through time.

Although the deviants do not represent the only enemy of the people, because people can become their own worst enemy, the deviants are prohibited from interjecting themselves into conflicts amongst just human beings.

Even if humans begin committing genocide, eternals must stay in their place and let the humans eventually figure out their problems and correct them.

The sole purpose of the eternals is to fight the deviants, then to integrate into regular society like a normal-looking person.

The only problem is that the eternals never age so it is impossible to totally integrate into normal society.

Furthermore, since eternals are not really human, they cannot possess true human emotions, sympathy or empathy.

In “Eternals,” when Arishmen gives them a fateful assignment, his loyal soldiers begin having some doubts about his leadership and the demands he is making on their lives.

In “Eternals,” Arishmen has allowed an emergence that will bring celestials to planet Earth.

The emergence will cause the deviants to hunt the eternals.

Furthermore, the emergence will put all human beings in jeopardy of extinction.

For some eternals, that is a reality that they cannot just accept without resistance.

Bluntly, “Eternals” is a fire movie and will make household names out of many of its actors.

Obviously, Madden is a star thanks to shows like “Game of Thrones.”

Additionally, Jolie is a mega star because of her catalog and because she embodies charisma.

But some other lesser-known actors like Chan, Nanijani, McHugh and Henry might reach another stratosphere because of the popular Marvel universe.

However, “Eternals” represent a catch-22.

The flashback scenes in “Eternals” are remarkable at times because it gives moviegoers a back story to the group.

Some of those scenes are great because they perfectly mix the ancient times with the modern times.

But some of those flashback scenes become redundant because the movie contains too many.

As a result of the redundancy of the flashback scenes, the movie stretches to over two and a half hours.

Without some of those flashback scenes, “Eternals” could have come in at closer to two hours.

Furthermore, some Marvel fans have already complained that “Eternals” introduces too many new characters at once, instead of slowly introducing its characters like the “Avengers.”

Despite the clutter of so many characters, “Eternals” sparkles because of the stunning visuals, especially those from the flashback scenes.

As a result of those spectacular visuals, Marvel has another one.

Will it measure up to some of the other Marvel films like “Black Panther” and “Shang-Chi?”

But just because something is not as big a hit as a previous hit, does not mean it is not a hit.

When a franchise is accustomed to blockbuster hits, another one like “Eternals” is to be expected.