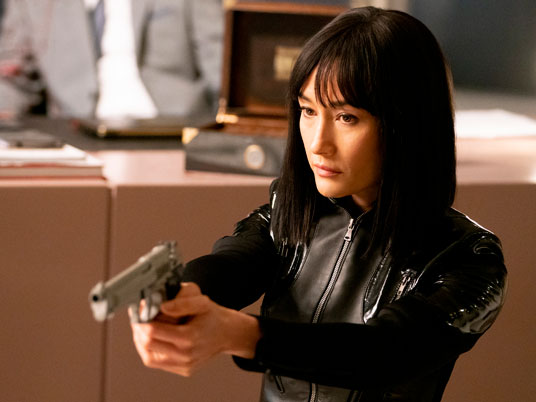 One sentence can summarize “The Protégé.”

The film shows the magnificence of Maggie Q, especially when it comes to her stunts.

In the meantime, “The Protégé” might have stumbled on a female version of “John Wick,” which means a film franchise containing multiple sequels.

Webster’s Dictionary defines a protégé as “one under another’s patronage.”

Often, when people think of a protégé or a mentor, they have a positive interpretation of what that means.

That family mentor teaches the younger family member the values of hard work and morality.

Once that person comes of age, their next mentors are usually teachers, professors, a colleague with more experience in a particular profession or supervisors.

That person schools the newcomer on the ins and outs of their chosen profession and tries to steer them away from the career mistakes that they made in the past.

But what if a person’s mentor is a trained assassin?

If a hit man is someone’s mentor, then that mentee is probably headed for a life of crime.

However, mentors often only mentor people that have potential.

Therefore, if an assassin takes someone under their wings, then that must mean they see a potential assassin in their vicinity.

Regardless, murder and mayhem will probably soon follow from such a relationship.

In “The Protégé,” Anna (Maggie Q) and Moody (Samuel L. Jackson) develop more of a friendship than a mentorship, which helps their characters seem more relatable even if audiences cannot relate much to assassins in their everyday life.

Young Anna (Eva Nugyen Thorson) and Moody meet at gunpoint in Vietnam in 1991.

Although Young Anna is elementary school age, when she meets the older Moody, she makes it clear that she has no problem pointing a gun in the direction of an adult and pulling the trigger.

Fast forward 30 years and Moody and Anna are a team of mercenaries specializing in finding people who do not want to be found.

Their team kidnaps someone and demands 30 million euros for his release.

When Anna arrives to collect the money from the Butcher of Bucharest, he lets her know that she will not have long to enjoy the money because he and his guys will hunt her down and execute her.

But when a woman has been surrounded by murder and mayhem since her childhood, threats of violence do nothing to scare her.

As a matter of fact, it might motivate her to take matters into her own hands instead of waiting to be on the defensive.

But despite Anna’s hardcore exterior, she has a more humane side to her personality as well.

She has a passion for rare books and limited-edition books, like Edgar Allen Poe’s original book of poetry, published under a different name.

Anna works at a bookstore in which the rare books sell for tens of thousands of dollars or more.

She has a spot in her heart for rare books.

And Anna obviously also has a spot in her heart for the man that raised her, Moody.

For Moody’s 70th birthday, Anna buys him a rare guitar that one of his favorite guitarists actually played.

Furthermore, when Moody cannot overcome a severe cough, she encourages her friend, mentor and father figure to go get that checked out.

So despite being assassins, “The Protégé” does a fantastic job of humanizing two people who should be vilified.

Actually, “The Portege” does such a fantastic job in humanizing Moody and Anna that audiences will actually cheer for assassins and not the people they assassinate.

Although the team of killers in “The Protégé,” have not met many people on their diabolical level, that all starts to change when Moody gives Anna the assignment of finding a gentleman named Lucas Hayes.

However, Moody is specific about the assignment of finding Lucas.

Moody just wants Anna to find Lucas, not find and kill him like some of their other targets.

However, when Anna starts inquiring about Lucas, all you know what begins to break out thanks to a couple of people named Duquet (Ray Fearon) and Michael Rembrandt (Michael Keaton) that are just as bad and menacing as Moody and Anna.

Simply put, “The Protégé” is Maggie Q’s coming out party.

She does all her own stunts in the movie.

Her character Anna goes toe-to-toe with any man that gets in her way.

And Anna is never afraid to pull the trigger or pull out a knife.

She is the definition of a boss chick.

The action scenes in “The Protégé” are superb, bloody and stomach turning.

And for that stomach turning reason, “The Protégé” might not be some moviegoers cup of tea.

Violent is more of an understatement when describing “The Protégé.”

And although calling Jackson a movie star is the understatement of the millennium, to say the brother is typecast as the loud, violent and foul mouth brother is no hyperbole.

But “The Protégé” is all about Moody’s protege in the movie, played by Maggie Q.

Sure, she had roles in movies like “Divergent” and “Insurgent.”

But this is her true coming out party.

In “The Protégé,” Maggie Q goes up against the likes of Jackson and Keaton and basically takes her veteran co-stars to action movie school.