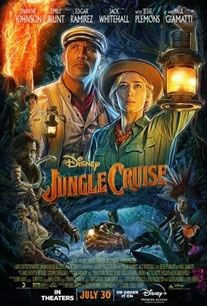 Where does “Jungle Cruise” rank on the list of jungle entertainment?

Unfortunately, “Jungle Cruise” might rank towards the middle of the pack.

Many movie fans can still remember Morris Day of The Time stealing the show from his mentor and former bandmate, Prince.

The song “Jungle Love” talked about rough sex with Day telling his woman he wanted to her lock her up and hide the key.

He continued by telling her to only have water because she if was hungry, just take a bite out of him.

Who could forget Gator bumming money from his brother instead of knocking elderly people in the head for their money?

Furthermore, who could forget the gator dance that he did after he told his mother about his new job that required $100 for the job application?

Then there was the “Rumble in the Jungle,” in which Muhammad Ali shocked the world by defeating George Foreman in Kinshasa, Zaire to regain the heavyweight boxing championship.

Many people thought that the powerful Foreman would actually hurt Ali in the “Rumble in the Jungle,” especially after Foreman had destroyed Joe Frazier.

Movie fans will also remember the song “Welcome to the Jungle” being played as Joe Clark walked the hallways of Eastside High in “Lean on Me.”

But as far as “Jungle Cruise,” the movie is just O.K. as it tries to navigate the treachery of a jungle despite the star power of actors like Dwayne “The Rock” Johnson (“Jumanji: The Next Level”), Emily Blunt (“A Quiet Place Part II), Paul Giamatti (“12 Years a Slave””) and Jesse Plemons (“Judas and the Black Messiah”).

“Jungle Cruise” centers on the legend of the Tears of the Moon.

Legend has it that if a person gets a flower from the Tears of the Moon tree, they will receive healing powers that would solve all ailments in life.

For centuries, explorers have traveled through the Amazon jungles to receive a petal from the healing tree.

Unfortunately, no one has succeeded in receiving the healing powers that the alleged tree offers.

Fast forward from centuries of failed attempts to London in 1916.

Only two years earlier, England had endured the Great War and Lily Houghton (Blunt) is convinced that the legend of the Tears of the Moon is true.

Additionally, Lily believes that receiving the healing powers from the Tree of the Moon would help England’s military in future battle.

Moreover, the healing powers of the Tree of the Moon could possibly cure all illnesses, thereby changing the entire world.

Unfortunately, Lily is a woman.

And women in 1916 London do not get much respect from the powers that be in British society.

Therefore, Lily must get her brother MacGregor Houghton (Jack Whitehall) to present her case to the country’s shot callers and power brokers.

But while Lily is a rough and tough minded individual, her brother is more interested in living a life of pampered luxury and has no interest in Lily’s escapades.

MacGregor does have interest in Lily’s success because of her unconditional devotion to her brother in a world that does not accept him just as much as the world does not accept powerful women like Lily.

Because of rejection, Lily and MacGregor have a permanent bond that will never fracture, even if MacGregor makes a fool out of himself presenting Lily’s case.

Additionally, the relationship does not fracture even if Lily is willing to break the law to reach the Amazon jungle to find the elusive and mythical Tears of the Moon tree.

That sibling bond means MacGregor must follow his risk-taking sister to the Amazon jungle to search for the tree with the healing powers.

Once at their destination, they also must find a skipper to conduct the cruise that will take them through the treacherous waters of the Amazon.

While Nilo (Giamatti) wants to charge Lily $50,000 for the cruise, the down-on-his-luck Frank Wolff (Johnson) agrees to skipper the cruise for less than half of Nilo’s price.

Unfortunately, Frank has a bad reputation amongst skippers and the locals because he runs the cheapest cruise line, which is not a compliment.

Actually, he cannot even afford to pay for the engine in his ship.

Nevertheless, he accepts the gig from Lily, which leads to some interesting moments for “Jungle Cruise.”

The movie “Jungle Cruise” is a fun and lighthearted movie.

Frank has a corny personality, with the lamest jokes ever.

Lily has a spunk and determination that is ahead of her time for many women.

And while Lily is the sporty and outdoor type, her brother MacGregor is metrosexual before metrosexuals existed.

While Lily brings one piece of luggage on the ship, MacGregor packs as if he is Prince Akeem in “Coming to America.”

The relationship between Frank, Lily and MacGregor gives “Jungle Cruise” its personality.

However, the fake-looking jungle scenes, including the animals, do not impress.

As the trio attempts to accomplish their mission, they unfortunately get lost in all the fuss happening in the jungle and is unable to stand out in that crowded jungle.