Movie Review: Interesting Characters, But ‘Spiderhead’ Nothing Special At Best 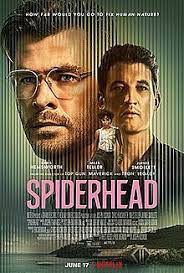 What would you do to get out of prison early?

Most so-called real-ones would not snitch.

But would the average prisoner offer their body and mind up to experimental treatment as if they are a human guinea pig?

In “Spiderhead,” even though the prisoners already have a country club environment in comparison to other jails, many still want their time reduced by participating in experimental treatment.

Unfortunately, what should be an understandable, relatable and believable plot, comes across as mediocre at worst, and nothing special at best, despite the star power in “Spiderhead.”

Over 20 years ago, Viagra changed the game for many couples, especially more seasoned couples.

When men could not perform like they did in their prime, Viagra added spice to a couple’s love life.

But what if a pill, or solution, could make you fall in love?

Sure, Viagra can alter a man’s blood flow.

But what if a chemical concoction could make people fall in love emotionally, even if they previously had no physical interest in each other?

What if a pill or solution could make someone laugh at things that the normal person would not find funny?

That type of invention or discovery could be worth a lot to people, especially in the comedy business.

What about a drug to make people feel scared?

What about a drug to make people talk more?

All these drugs are being developed at Spiderhead by Steve Abnesti (Chris Hemsworth, “Thor: Ragnarok”), who also runs the entire prison.

Some people have volunteered for the experiments like Jeff (Miles Teller, “Top Gun: Maverick”) and Heather (Tess Haubrich, “The Wolverine”).

While the experiments seem harmless enough, Jeff eventually has a problem with the ethics surrounding such experiments.

In “Spiderhead,” Jeff is a very interesting and relatable character.

What many people might not realize is that everyone in prison is not a hardened criminal.

Some people had pristine records and one mistake cost them their life, and possibly cost other people their lives.

What does that guilt, and regret do to a person in prison?

It is understandable if guilt and regret eats at a person throughout their prison stint and beyond.

Or a person could use their time to try to make up for the mistakes they made in the past.

Trying to make a difference is why Jeff signed up for Steve’s experiments.

While Jeff does not initially have a problem with the fake love that the drugs create with women like Heather, his real reason for the experimentation is to prevent someone from doing what led to him landing behind bars.

“Spiderhead” also represents another dynamic of the prison system.

No matter how “nice” a prison is, it is still a prison.

At Spiderhead, inmates live in an idyllic setting.

The exterior of the prison looks more like a tropical resort than the penitentiaries many Americans envision when they think about incarceration.

While some of the same threats remain like being violated, in this case by an inmate named Rogan (Nathan Jones), Spiderhead is not a disgusting or grimy cage that many jails are.

Many of the inmates get along.

Some real relationships and friendships form.

And inmates do not appear to be in constant physical danger at Spiderhead.

At Spiderhead, prisoners have a resident/criminal chef in Lizzy (Journee Smollett, “Birds of Prey”), who prepares restaurant-like dishes for the inmates daily.

In “Spiderhead,” Lizzy also runs the snack bar in which prisoners have a plethora of snacks to enjoy at any time.

Like Jeff, Lizzy is another interesting character who must handle the stress and pain of her mistakes that led to her incarceration.

Her predicament mirrors that of Jeff so much it seems inevitable that they will gravitate towards each other, for better or worse.

But despite the beautiful visuals of the prison’s exterior, interesting characters and A-list stars, “Spiderhead” still leaves much to be desired.

Nevertheless, in a sometimes-lighthearted way, “Spiderhead” does touch on some interesting topics that have actually happened in real life, inside and outside the four walls of a prison cell.

In fact, even non-prisoners have often unwittingly been the guinea pigs for scientific and medical experimentation.

But what should have come across as a new-age twist to an old school problem lacked the excitement that it should have possessed.

Teller is coming off a career-changing role in “Top Gun: Maverick.”

Hemsworth is iconic for his performances as Thor.

But “Spiderhead” still manages not to fulfill its promise.

Hemsworth, who co-produced “Spiderhead,” previously hit paydirt with Netflix with his performance in “Extraction,” which will become a franchise.

Unfortunately, “Spiderhead” does not maintain the Netflix momentum for the Australian actor.

The music in “Spiderhead” will bring back memories for many viewers

And if the music does not take people down memory lane, Jeff’s fascination and skill with the etch-a-sketch might do the trick.

Despite not living up to its potential, “Spiderhead” does effectively capture the human dilemma or human condition.

How far would you go to do what is best for you, even if that puts others in danger?

What would you do to right a wrong from your past?

And can you ever truly make amends for permanent damage done to yourself and to others?