Movie Review: ‘Honk For Jesus: Save Your Soul’ Contains Stereotypes, Heart in Interesting Critique of Some Church Leaders 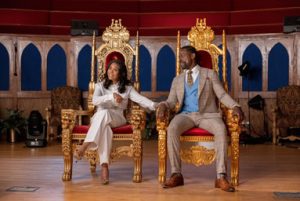 (“Honk For Jesus: Save Your Soul” trailer courtesy of Focus Features)

Hollywood is not always the right venue to get a true depiction of the Christian church.

Sure, some filmmakers and actors like Tyler Perry and Kirk Cameron have nailed it in the past.

Nevertheless, “Honk For Jesus: Save Your Soul,” manages to capture the good, bad and the ugly that exists in some churches without making too much of a mockery of church leaders, while also holding the bad ones accountable for their sinful behavior.

In “Honk For Jesus: Save Your Soul,” Rev. Lee-Curtis Childs (Sterling K. Brown, “Waves”) and First Lady Trinitie Childs (Regina Hall, 2019 version of “Shaft”) have combined the American dream with Heaven’s dream, building an empire that includes a megachurch with 25,000 parishioners, a mansion, luxury cars and all the Prada suits any one man could possibly desire.

In “Honk For Jesus: Save Your Soul,” Lee-Curtis brags about his Rolls Royce, his helicopters and other luxuries.

But while many pastors can lead potential members away from the church when they flaunt their wealth, Lee-Curtis is seen by the people of the community as a true leader and a true shepherd.

People regularly come up to him and tell him how he changed their lives for the better.

That is why when a scandal erupts inside the church, it fractures that once unified community and Lee-Curtis’ congregation.

Although Lee-Curtis will not face any criminal charges, a sexual misconduct allegation, or allegations, threatens to burn down his once-thriving ministry like the fires of Hell.

In “Honk for Jesus: Save Your Soul,” several former congregants have come forward and alleged that Lee-Curtis used his position of power to sexually abuse them.

That allegation has led to increased media scrutiny of the church and its leaders.

Furthermore, the allegations against Lee-Curtis have led to a mass exodus from his local congregation.

Although Lee-Curtis and Trinitie still have some faithful parishioners, many of the church’s congregants have fled to nearby church, Heaven’s House, which is led by Lee-Curtis’ former protégé.

Although it is great to see Christians not give up on the faith entirely when one leader commits a sin, Lee-Curtis still wants his former parishioners back in his sanctuary.

Additionally, he wants to clear his name and erase from people’s memories, all the salacious allegations against him.

Therefore, the decision is made to close the sanctuary until Easter Sunday when Lee-Curtis’ church will experience a renaissance and resurrection like no other local congregation has ever witnessed.

He and his wife have also hired a documentary film crew to document the rebirth of his congregation, and to dispel all the sinful rumors that are out there about Lee-Curtis.

In the great book Screenplay: The Foundations of Screenwriting by Syd Field, the author writes about how a screenwriter must capture the audience’s attention in the first 10 to 15 minutes of the movie.

Typically, one page of a screenplay is one minute of screen time in a movie theater.

In “Honk For Jesus: Save Your Soul,” Lee-Curtis initially embodies everything that some ex-Christians have learned to loathe about the church from misuse of money to hypocritical preachers that castigate sinners when they are simultaneously committing the same sins behind closed doors.

But as a wise man once said, what’s done in the dark eventually comes to light.

And when the light shines on a person in an unflattering way, escaping the negative limelight might prove too difficult of a task to successfully complete.

While the beginning of “Honk For Jesus: Save Yourself” leaves much to be desired (because it does mock and stereotype the church to some degree), if audiences stick it out, they will find a film with some heart, soul and hopefully redemption and forgiveness.

The way that “Honk For Jesus: Save Your Soul” is shot in documentary/interview form is very interesting.

That documentary-style makes the film more like a confessional.

However, this time instead of the parishioners confessing, the pastor is somewhat “confessing.”

Although Lee-Curtis may or may not confess, “Honk for Jesus: Save Your Soul” effectively portrays the roller coaster that is faith, and why repentance is required before a potential rebirth.

Nothing bad can be said about the performances of Hall and Brown.

Even the co-stars of “Honk For Jesus: Save Your Soul” like Nicole Beharie (“Breaking”), who stars as the First Lady Shakura Sumpter of Heaven’s Hope, shine as well.

However, Beharie shines more in “Breaking,” another movie that is currently in movie theaters nationwide.

But the good qualities of “Honk For Jesus: Save Your Soul” belong to Hall and Brown.

Those two brilliant actors will make moviegoers empathize with both characters.

How could Trinitie stay with Lee-Curtis considering the circumstances?

Additionally, how is it possible to root for Lee-Curtis despite his shortcomings?

Their talent makes it possible.

It also covers up for some of the stereotypical behavior of some Christian pastors, highlighting a complex couple with complex issues and no easy solutions to get back on track.